"After reading "Zou Bihua Biography", the most touching thing is the motto of Judge Zou Bihua - 'Live, is to change the world'. In June this year, we are going to the Netherlands, The Hague, to embark on the court of the International Criminal Court Moot Court, and from The delegations of 54 countries exchanged ideas. As a big country youth in the new era, we should remember this rumor, combine legal theory with practice, and strive to change the world!” along with the law school 2016 undergraduate Mei Long Coming to the firm words of the classmates, there was a burst of applause from the law court of the Kaiyuan Building in the Law School.

On the morning of April 4, on the occasion of the Ching Ming Festival, the 1st group branch of the 2016 Undergraduate School of Law School held a special theme group day to commemorate the 100th anniversary of the May Fourth Movement in the Kaiyuan Building Moot Court. Qi Hu, the head of the grassroots construction department of the Central Committee of the Communist Youth League, Chen Baojian, member of the Standing Committee of the Peking University Party Committee and vice president, came to the guidance. Pan Jianfeng, dean of Peking University Law School, and Guo Li, secretary of the party committee, attended the event. Zhao Xueshan, secretary of the 1st branch of the law school's 2016 undergraduate, served as the host. 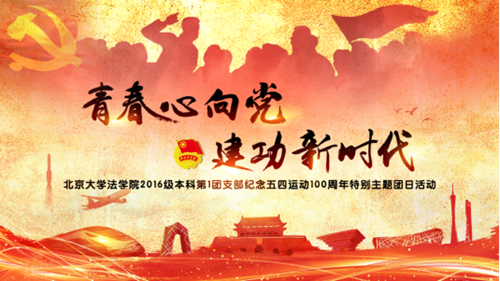 The event kicked off in the majestic national anthem. Through a short film, the teachers and students of the meeting reviewed the short and splendid life of Zou Bihua.

Zou Bihua alumni is a pioneering example in judicial reform and a good judge for justice in the new era. In order to commemorate Zou Bihua and earnestly learn the spirit of him, this event invited Guo Li to teach a "micro-group lesson" for the students. Teacher Guo Li combined with President Xi’s ardent hopes for young people at the Peking University Teacher-Student Symposium, pointing out that young legal persons should practice the requirements of “patriotism, inspiration, truth-seeking, and commitment” and inherit the aspirations of Zou Bihua and shoulder the burden. Take the responsibility and make their own contribution to the new era. 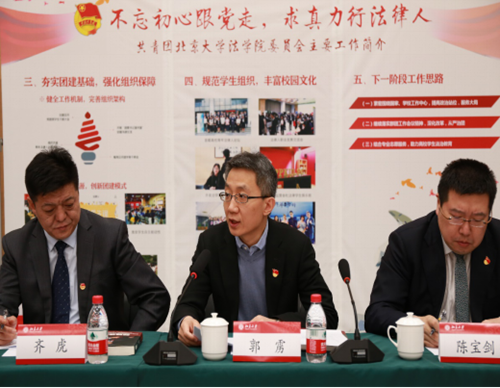 Chen Ge, Shi Moran and Mei Yilai came to speak in turn. The three students carefully shared their understanding and action interpretation of the spirit of Zou Bihua from different perspectives such as academic studies, volunteer service and social practice. The deeds sharing of the three outstanding student representatives made the branch students feel more excited and enhanced their confidence and determination to practice the spirit of Zou Bihua.

In the free speech session, the branch students speak freely, or tell the experience of learning and practice, or share the feelings of reading "Zou Bihua Biography". During the discussion, everyone has a deeper understanding of the depth and richness of the spirit of Bihua.

Minister Qi Hu made a summary review. He pointed out that the ideal belief supported by the feelings of the country is the fundamental source of Zou Bihua's spirit; as a member of the Communist Youth League, we must adhere to the "four self-confidences" and integrate the destiny of the country with the development of the individual to help realize the greatness of the Chinese nation and the Chinese dream of revival. Minister Qi Hu expressed hope for the construction of grassroots league branches, and asked the grassroots league branches not to forget their initial intentions, to bear in mind the mission, to listen to the party, to follow the party, to play a political leading role, and to be a good assistant to the party and a reserve army. He hopes that the members of the branch will keep the advanced nature of the college youth members. As a young legal person, they will carry out correct social observations and truly pursue the law and morality and strive for the fairness and justice of the whole society. At the end of the event, the members of the branch revisited the oath of the group and sang the group song "Glorious, Chinese Communist Youth League". In the bright voice, this theme group day event was successfully concluded. 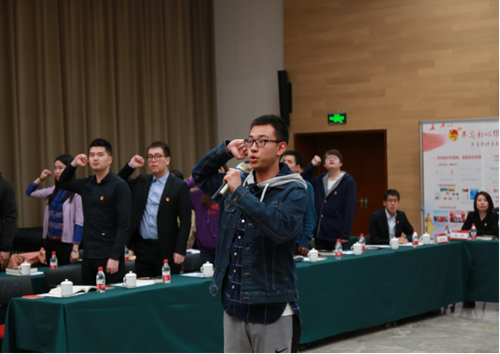 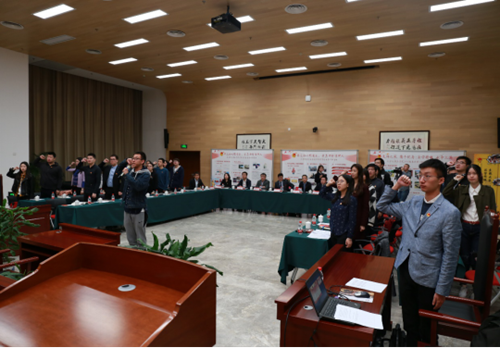 This theme group day event closely follows the Ching Ming Festival time node. By reminiscing the "reform pioneer" Zou Bihua alumni, using real people, real things and true feelings, let the spirit of the model truly enter the mind among the young members of the group and guide the youth of the group. Never forget the initial heart, bear in mind the mission, firmly not listen to the party's words, follow the party, and strive to win the victory in building a well-off society in an all-round way, to win the great victory of socialism with Chinese characteristics in the new era, and to realize the great rejuvenation of the Chinese nation!