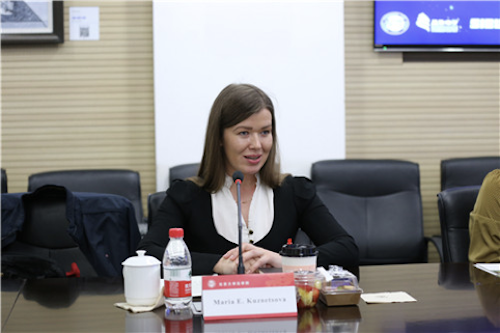 Maria Yevgenevna Kuznetsova, head of the Legal and Contract Management Department of NIPIGAS

According to Maria Yevgenevna Kuznetsova, head of the Legal and Contract Management Department of NIPIGAS, NIPIGAS is one of Russia's leading design institutes for oil and gas processing, and is a unique vertically integrated natural gas processing company and the petrochemical company. NIPIGAS has carried out a number of businesses in the Far East of Russia, including natural gas, petroleum, and LPG processing. Amur Gas Project is one of the key projects to the Gazprom to guarantee the Sino-Russian Natural Gas Supply Agreement (East Line). In order to ensure the smooth completion of the business, Sibur is in urgent need of cultivating more professionals who understand Chinese culture and Chinese law. She hopes to cultivate more compound legal talents through cooperation with Peking University Law School. 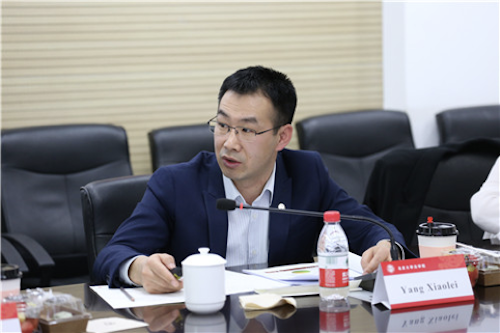 Afterwards, Yang Xiaolei, associate dean of Peking University Law School, introduced the project to Russian side. Dean Yang briefly introduced the development history of the law school, teaching and research achievements, students' second classroom activities, international exchange and cooperation, and high-end talent training mode. He pointed out that the project will be positioned to spread Chinese culture, serve global development, and take the rule of law and business ability as the path to cultivate international high-end talents with compound law and commerce and responsibility and innovation. The course covers multidisciplinary, cross-disciplinary and multi-disciplinary, integrating theoretical knowledge and practical experience with classroom teaching and fieldwork teaching methods to achieve a high degree of interaction between theory and practice, value and experience.

Afterwards, the two sides conducted a more in-depth discussion on the project cooperation.

In the afternoon, Pan Jianfeng, Dean of Peking University Law School, Yang Xiaolei, Vice Dean, Alexei Yuriyevich Nikiworov, legal director of Russian Xibul, and Zou Wenzhi, vice director of the Sinopec Group conducted a video conference call. The two sides confirmed the results of the previous meeting and reached a consensus on the far-reaching significance and promotion of cooperation.

After the talks, the visitors visited the campus of Peking University and both sides expressed their expectations for cooperation. The visitors visited the campus of Peking University

On the occasion of the 70th anniversary of the establishment of diplomatic relations between China and Russia, the exchange and cooperation between Peking University Law School and Russian Far Eastern Federal University and Russia Sibur\NIPIGAS will further enhance mutual understanding and mutual trust, promote cultural exchanges, and deepen cooperation in talent training and in the area of law construction.