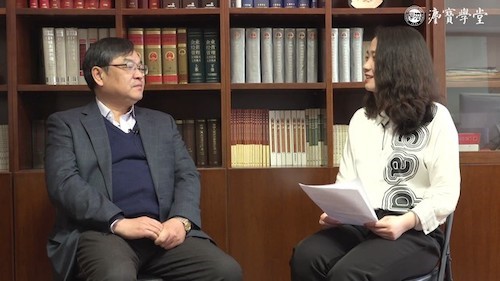 In the interview, President Pan Jianfeng mentioned that the most important task of the school is to train talents. Over the years, Peking University Law School has taken several reform measures for curriculum setting and classroom teaching, and has made some progress and achievements. Beida Fa Bao College relies on Peking University Law School and Beijing Beida Yinghua Technology Company to provide a good platform for teaching reform. Compared with the normative and systematic nature of traditional teaching, Beida Fa Bao College is more flexible and diverse.

President Pan combined his own professional field, civil procedural law, to point out that three Internet courts have been set up in China with the development of science and technology, which posed many challenges to the traditional civil litigation system. In addition, even in the traditional field, there were also some new problems. President Pan suggested that Beida Fa Bao College should consider offering courses for the public in these areas.

Dean Pan made an innovative suggestion that Beida Fa Bao College mainly offers some courses related to law at this stage, but we must further broaden our horizons and open up fields with the development of the times. We can introduce professional courses in other fields in the later stage to help improve social management and improve humanistic accomplishment.