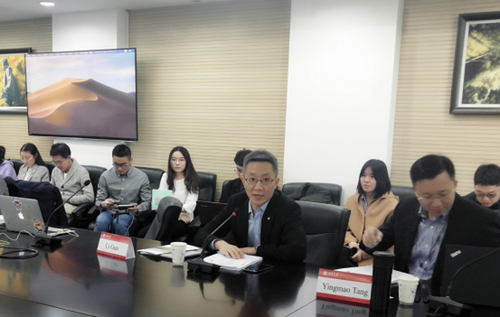 The first speaker was Ms. Anne Lafarre, assistant professor from Tilburg University. Under the theme of “Small Shareholder Engagement: The Effects of Enhanced Shareholder Rights in Europe”, she explored the justification of the European Commission's encouragement of shareholders to exercise their rights and participate in corporate governance. Taking the shareholder attendance data in Belgium, the Netherlands and the United Kingdom as samples, she used the DiD method to analyze whether the SDR issued by Europe Commission actually had an impact on enhancing the participation of minority shareholders in listed companies. 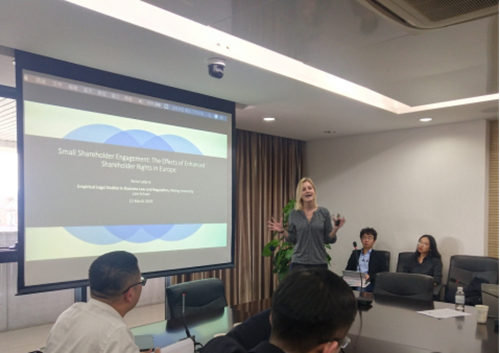 Mr. Zhuang Liu was from the School of Management and Economics of the Chinese University of Hong Kong. As the second speaker, he presented his paper “Transparency in an Autocracy: China’s ‘Missing Cases’ in Judicial Opinion Disclosure”. Mr. Liu’s article discussed the missing data issue and selection bias issue in connection with the website of China Judgement Online, a central database of court decisions mandated by “Provisions on the Issuance of Judgments on the Internet by the People's Courts” promulgated by the Supreme People's Court in 2014. In particular, Professor Liu analyzed the factors that contribute to the selection bios such as political impact, state-owned enterprises identities and protection of enterprises located in jurisdictions of home courts. 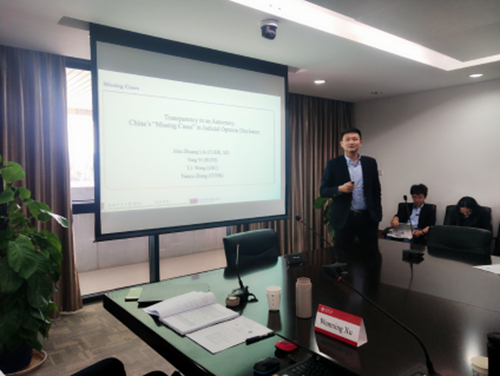 Mr. Chao Xi, professor from the Faculty of Law of the Chinese University of Hong Kong, discussed the behavioral tendency of Chinese institutional investors in exercising their voting rights in his report “Apathy, Activism or Collusion? How Chinese Institutional Investors Vote Their Shares”. Based on the voting data of resolutions or proposals in the annual shareholders’ meetings and provisional shareholders' meetings from 2002 to 2016, Mr. Xi’s report provides evidence for the tendency of institutional investors to “conspire” with controlling shareholders and company management rather than speaking out for minority shareholders when participating in the shareholders’ meeting. 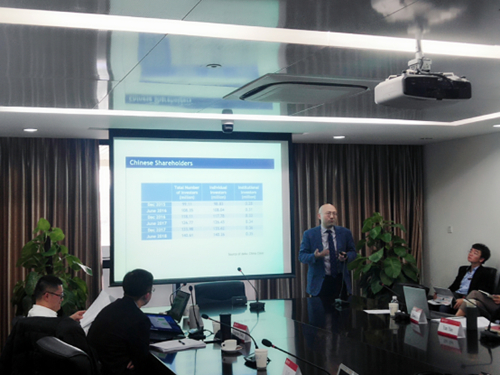 Mr. Wei Zhang from Singapore University of Management Law School, who was connected remotely through Wechat voice, as well as Mr. Si Zeng, Mr. Christoph Van der Elst, Ms. Anne Lafarre and Mr. Jinhua Cheng provided their comments on data availability and methodology on the four papers presented in the first session. They also provided suggestions on the improvement of the abovementioned studies. After a short tea-break, the second session of the workshop started. It was chaired by Mr. Chao Xi. The speakers include Mr. Christoph Van der Elst, Mr. Jinhua Cheng, Mr. Si Zeng and Mr. Yingmao Tang.

Mr. Christoph Van der Elst was from Tilburg University. He presented his paper “Shareholder Engagement and Shareholder Voting Modes: Two of a Different Kind”. According to the relevant data of French companies, Mr. Van der Elst found that the engagement of minority shareholders was gradually declining, and the “forum function” of the “physical” general meeting of shareholders as the place for debate and discussion was eroded after remote voting became the current technique for voting. He also discussed shareholders’ engagement in corporate governance against the background of the development of new technology. 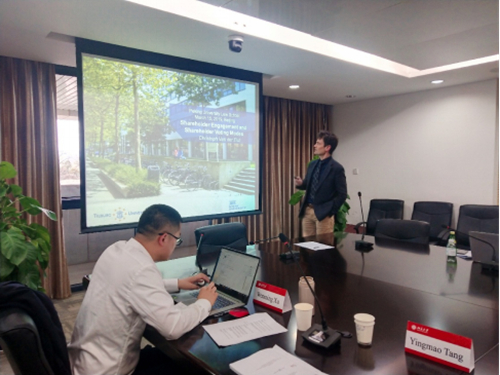 Mr. Jinhua Cheng, professor from Shanghai Jiaotong University Koguan Law School, presented his paper on the factors that affect the decisions on whether or not to approve the initial public offering by the China Securities Regulatory Commission. By examining 1343 companies that made IPO application to the CSRC from 2014 to 2018, Mr. Cheng’s paper discusses the market factor (i.e. reputation) and the “relationship” factor that had impacts on the approval of IPO applications. He advocated that the impact of the “relationship” factor should be replaced by the reputation factor, which also provide support to the forthcoming reform of new share issuance system. 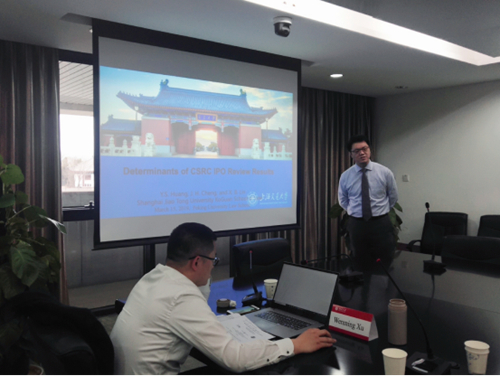 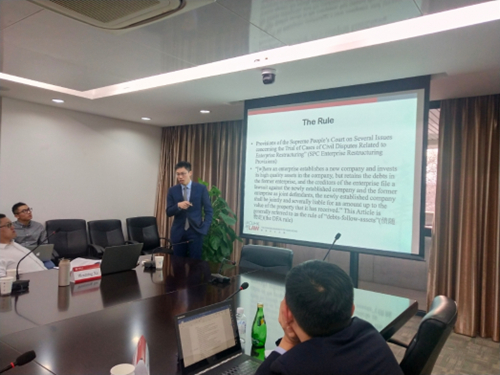 Mr. Yingmao Tang, the last speaker and associate professor from Peking University Law School, presented his paper on local financial regulation in China based on his empirical study of China's micro-lending companies. Mr. Wenming Xu and M. Zhuang Liu provided their comments on the four papers presented in the second session. During the Q&A session, professors responded to questions raised by the audience. At the end of the workshop, Mr. Van der Elst, Mr. Chao Xi and Mr. Yingmao Tang gave brief closing remarks. Scholars and participants expressed their gratitude to the organizers and their expectations for workshops in the near future .