In order to further implement the requirements of General Secretary Xi Jinping, "Cultivate the socialist builders and successors of all-round development of moral, intellectual, artistic and work", PKULS give full play to the positive role of social practice in strengthening and improving the ideological and political education of college students, and lead the students to enter the society. Going deep into the grassroots level, the Law School Youth League Committee actively responded to the call of the school league committee and organized a series of winter holiday social practice activities with the theme of “walking 2019 – doing the truth-seeking jurist”.

Promoting the practice of reform theory by promoting research

General Secretary Xi Jinping pointed out at the 40th anniversary of the Reform and opening that "Reform and Opening is a great revolution in the history of the development of the Chinese people and the Chinese nation. It is this great revolution that has promoted the great leap of socialism with Chinese characteristics." In order to gain a deeper understanding of the great achievements in the past 40 years of Reform and Opening, and to establish a sense of responsibility in the jurist era, the students of Peking University Law School formed a practice group to go to all parts of the country to gain an in-depth understanding of the great changes in the comprehensive and deepening of various undertakings.

From January 22nd to 25th, 2019, the Fujian Judicial Research Group of the Law School went to the Siming District Court of Xiamen City and the Xinluo District Court of Longyan City to gain an in-depth understanding of the grassroots of two representative cities in Fujian Province, and the legal practice and the development of the rule of law in the two places in recent years. With the deepening of the investigation, the research team found that the Siming District Court and the Xinluo District Court had attracted people's attention to the use of information technology. This measure closely follows the guiding spirit of the Supreme People's Court, greatly facilitating the lives of the people and reducing litigation. Cost and improve the efficiency of the court. Through the four-day field trip, the research team had a more comprehensive understanding of the actual operation mode of the electronic court and the depth, breadth and practical significance of the "informatization" and "networking" in the grassroots rule of law work. There was also a deeper reflection on the relationship between law and law in practice.

In order to deepen the understanding and recognition of excellent traditional culture and enhance the consciousness of inheriting and carrying forward the excellent traditional culture, from January 22nd to February 4th, the students went to the local folk customs in Shuitianhe Town, Baojing County, Xiangxi Tujia and Miao Autonomous Prefecture, Hunan Province, to investigate the inheritance of local folk culture. In the traditional Chinese New Year, the practice group walked into various local households and experienced traditional folk culture. Through research, the members of the practice group deepened their recognition and understanding of the traditional cultural customs in their hometowns, and put forward their own thoughts and insights on cultural inheritance. They realized that what we really need to inherit and develop may not be just cultural customs, but more A cultural identity, as well as profound cultural consciousness and cultural self-confidence. 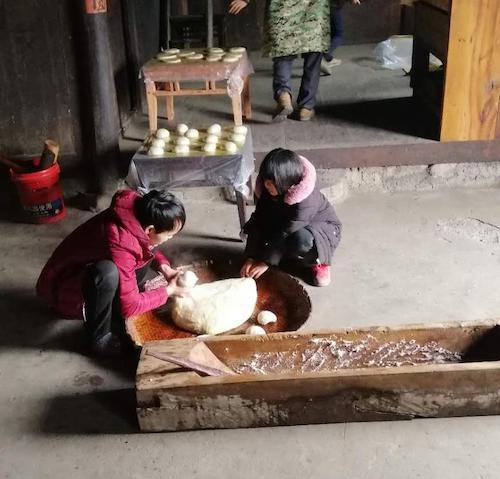 Since the Reform and Opening, China has made great achievements in economic construction, political development, cultural prosperity, improvement of people's livelihood, social governance, etc. Law School students also went to Shiyan City, Hubei Province, Xiangxi Tujia and Miao Autonomous Prefecture, Hunan Province, conducted on-the-spot investigations and investigations on the rule of law construction, industrial development, and cultural changes in the hometown, and further thought about the new mission, new tasks, and new challenges of the hometown in the new era of reform and opening up.

Inspiring by practice, feeling the pulse of the rule of law

From January 17th to 18th, the practice group of the Law School Masters Association of Law School walked into Changsha City and carried out research activities on the topic of " Legal contact you and me, meet Changsha". In order to strengthen the communication between law school graduate students and Changsha legal service agencies, the practice group and the team learned in depth through round-table discussions, field visits, and person dialogues to cultivate a new era of legal talents and build a competitive legal service supply and demand platform. A series of innovative, open policies developed. Through visiting Hunan University and Central South University Law School, the practice group learned the humanistic spirit of Changsha legal circle in academic talks; visited the judicial departments of Changsha Yuhua District People's Procuratorate and Changsha Intermediate People's Court Executive Committee to make the practice group use the theory combines the viewpoint of practice to observe the development of legal practice in Changsha under the new era. During the two-day compact practice, the practice group promoted the communication between the graduate students of Law School and Changsha Legal Service, and contributed to deepening mutual understanding and promoting talent exchange. Education is the foundation of national rejuvenation. The flourishing of private education is the epitome of Reform and Opening in the education field, which has an important impact on the overall development of China's education. From January 22nd to 25th, the Student Union of the Law School formed a winter vacation practice group in Chongqing, and carried out a four-day practice research activity with the title of “Legal issues in the field of private education”. In the course of practice, the practice group visited Beijing Yingke (Chongqing) Law Firm, Chongqing No. 1 Intermediate People's Court, Chongqing Bayu Ivy League International School, Southwest University of Political Science and Law, and deepened through special lectures and seminars. The understanding of the legal issues in the field of private education also shows the spiritual outlook of Peking University jurist. The research tour helped students to strengthen the rule of law belief, cultivate the concept of the rule of law, and improve the legal literacy. The members of the practice group will continue to uphold the concept of “academic succession and practice”, and strive to enhance theoretical literacy, enhance practical ability, and demonstrate and convey the spirit and responsibility of Peking University jurist's social development and practical progress. In Teacher's Day of 2018, General Secretary Xi Jinping pointed out at the National Education Conference that "education is the country's great plan and the party's plan." Education is prosperous and the country is strong, while education is strong. Law school undergraduates take advantage of the winter vacation time and the New Year's opportunity to return to the high school alma mater to carry out the preaching, which is both a grateful trip and a propaganda.

On January 25, 2019, Law School went to the Dongguan City Practice Group to carry out the “Leading Teenagers” returning home social practice and alma mater preaching activities in Dongguan Middle School. The practice group established long-term contacts with outstanding students of all grades in Dongguan Middle School through public lectures and individual conversations, showing the style of the North University and deepening their understanding of Peking University. After the end of the publicity activities, the members of the practice group compiled the experience of the propaganda activities, and also reflected and summarized the problems found in the preaching activities. 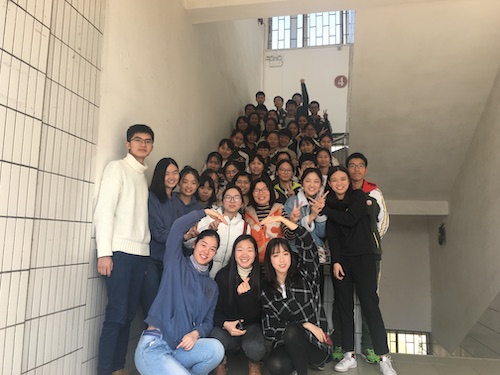 On January 29th, the School of Law went to the Tianshui City Practice Group to launch a social practice of returning hometown and a preaching activity of the alma mater. Through all-round data analysis and illustrated publicity and display, the members of the practice group outlined the colorful university life at Peking University to Tianshui No.1 Middle School and Senior High School students. After the lecture, the students, teachers and parents responded enthusiastically. The local media "Tianshui Evening News" also made a column report on the publicity activities. 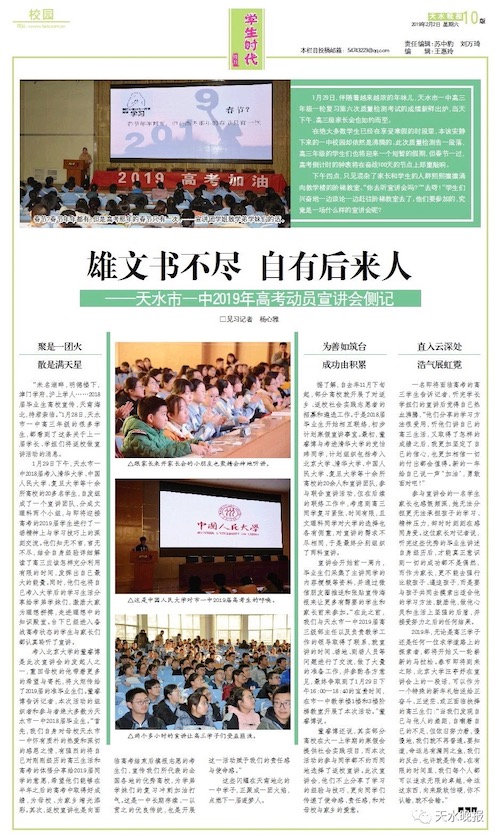 The student's winter vacation social practice activity is the specific implementation of the law school's active response to the call of General Secretary Xi's “doing a practical work.” It is an important part of the law school's full-education, all-round education, and whole-course education, aiming to encourage students. They actively entered the social classroom, fully linked their professional knowledge with social practice, and constantly deepened their understanding of national conditions, social conditions, and people's feelings. The School of Law will continue to train young and legal people who are both German and French, and seek the truth. The starting point and foothold of talent training, integrate the resources of various platforms, provide all-round support, and guide young students to receive education and contribution in the social.