On the afternoon of December 9, Peking University’s 2018 New Year’s “Amusement Learning” project and the 83th Anniversary of the “12.9th” Movement was successfully held in the 100th Anniversary Lecture Hall. After two months of wholehearted rehearsal and meticulous preparation, all the teachers and students of the law school performed outstandingly. They stood out in the fascinating teams of the faculties in a passionate "under the bright sun", and listed them in the high score of 94.30., ranking third in Group. 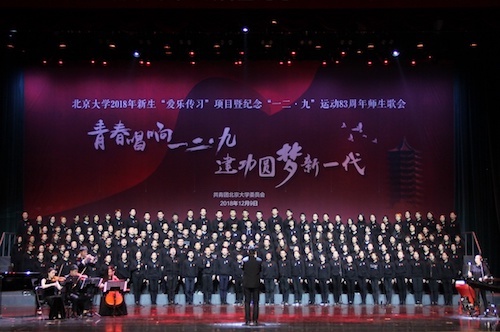 The teachers and students of the law school started the interpretation of the song "In the Bright Sun" with beautiful harmonies. A white skirt girl jumped into the stage with the singing voice, and the posture of stretching and squatting should be soft and wonderful. The harmony of the audience brought all the audience present into the mood of reminiscing the revolutionary journey. Under the command of skillful and full of passion, the four voices are perfectly matched and complemented each other. The shallow and melancholy, the songs are passionate and unrestrained, and the full emotions and moving singings drive the audience's emotions. In the accompaniment of many instruments such as piano, trumpet, violin, cello and drum, the teachers and students of the law school express their gratitude to the Chinese Communist Party for creating a new China with beautiful and passionate singing. "Following the Communist Party and building a big China", in the excitement of the high voice, three teenagers wearing military uniforms appeared, waving a five-star red flag and inspiring everyone's heart. One song has been completed, and the remaining sounds are not exhausted. The teachers and students of the law school have a passion for the party and the motherland.

The joint efforts of all the teachers and students of the college have made the outstanding achievements of the law school team. The leaders and teachers of the college have attached great importance to this event from beginning to end, and have repeatedly conveyed cordial condolences and warm care to the students on the rehearsal site. The Youth League Committee has carefully prepared for each training. The backbone of the students who participate in the logistics service provides the most enthusiastic and thoughtful service for the rehearsal teachers and students. The rehearsal of the vocal special students and students are patiently guided. The 2018 undergraduate freshmen are paying more activeness and lasting efforts.

On the day of the competition, nine teachers who are from law schools, such as Nian Yijia, Chen Zhihong, Du Xuejiao, Jia Weiwei, Lu Min, Guo Xingzhi, Zhang Dongxiao, Qin Jiangying, and Cao Yanyan, sang together with the students to win honors for the law school, reflecting good looks and cordial care for new students.

This event shows the spirit of the Peking University legal person and adds a new honor to the college. As a patriotic and collectivist educational activity, this event not only inspired the love of the Party and the patriotism of teachers and students, but also enhanced the friendship between teachers and students. The activity also made the 2018 freshmen enhance the sense of belonging and feel the warmth of the law school family. It is believed that the teachers and students of the law school will continue the positive and spiritual spirit, inherit the fine tradition of patriotism, and be a legal person of "patriotism, inspiration, truth-seeking, and commitment", and re-innovation!