On the evening of November 25th, the “Xue Er Si Cup” Peking University 13th Freshmen Cup Debate Finals was successfully concluded at the Sunshine Hall of Yingjie Exchange Center. The Law school debate team sent a debate including the first speaker Jiang Hanxue, the second speaker Tian Yuhan, the third speaker Liu Lijing, and the fourth speaker Wang Fengquan four 2018 undergraduate students and the School of Mathematical Sciences debate team competing on the same stage, around the debate " Being stubborn or blind from the big stream is even more tragic" to compete fiercely and eventually win the championship. 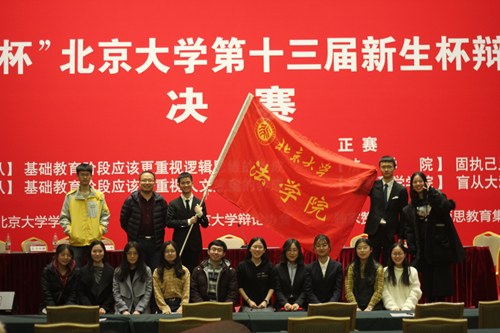 At the beginning of the game, the two sides debated separately. Then Jiang Hanxue, from the two levels of "restricting progress" and "falling into loneliness", said why obsessive stubbornness was more tragic than blindness. In the inquiry session, the two sides fought a fierce battle on issues such as the difference between the blind to obey the main stream and succumb to the main stream, and whether the stubborn was inevitably led to loneliness. In the refutation section, Tian Yuhan used the emotions and meticulous analysis to refute the narrow definition of the "main stream" and won the applause.

In the subsequent interrogation session, Liu Lijing took the initiative to effectively dismantle the opponent's argument that "the unreachable truth can be more sad", and fought back the opponent's attack on our arguments, and showed off the excellent style between the offensive and defensive. The game entered the free debate, and the debate team of the Law school debated alternately and golden sentences frequently appeared. In the final discussion, the two sides reviewed the important confrontation points on the field. On the other hand, Wang Fengquan once again sorted out the definition and took the social background as the entry point to demonstrate that "the stubbornness is more sad" in the era of advocating pluralism, which ended the game.

So far, the Freshmen Cup debate contest, which lasted for one month and more than 20 departmental teams attended, was successfully concluded. For the fifth time, the law school debate team stood on the stage of the Sunshine Hall and proved its strength with simple arguments, strict logic and clear expression. The law school debate team has achieved such good results, and it is inseparable from the efforts of all active members to prepare for the day and night, and try their best to prepare for the competition. It is even more inseparable from the support of the college leaders, teachers and debate team seniors. We hope that the law school debate team can make persistent efforts in the future debate field, climb the peak.

Review: The Way of Law School Debate Team to the Champion

Third round: Law School (The claim) vs School of Economics (The counterclaim)

In China today, the heating supply should be/should not be extended to the vicinity of the Yangtze River Basin.

Finals: Law School (The claim) vs School of Mathematical Sciences (The couterclaim)

Being stubborn or blind from the big stream is more tragic.