In 2018, the Institute of Labor Law and Social Security Law of Peking University relied on the “Exploration of the Frontiers of Rule of Law in the Workplace” and the “Labor Law and Social Security Law”, and invited the “Peking University Social Law Forum” as a platform to invite the United States, Britain, Germany and Japan well-known experts in social law in Australia, held a series of lectures and received good teaching and academic exchange effects.

The Institute of Labor Law and Social Security Law of Peking University is one of the earliest institutions for the study of social law in China. It is also an important center for international social exchanges in the Chinese social law community. The Peking University Social Law Forum is supported by the Jia Junling Social Law Academic Fund of Peking University Law School. It aims to showcase the frontier achievements of theoretical research and practical exploration of social law. It is an important academic platform for the long-term development of the Institute. So far, nearly 60 academic lectures have been held. “The Frontier Exploration of the Rule of Law in the Workplace” is a new course for the graduate students of the Institute since the spring semester of 2018. The “Labor Law and Social Security Law” is an undergraduate course that is open to the whole school for many years and allows elective courses for brotherhood. Both courses are taught by lecture in the main form, while focusing on expanding the students' horizons and deepening academic exchanges through lectures to stimulate and guide students' academic interests. In 2018, the total number of electives in the two courses reached more than 220, providing a good foundation for the opening of the lectures.

The development of social law in the world can be roughly divided into two parts: the Anglo-American legal system and the civil law system. The Anglo-American legal system is represented by the United States, Britain and Australia, and the civil law system is represented by Germany and Japan. Over the years, China's social law circles have carried out many exchanges with scholars from various countries. However, the enrichment of academic resources is limited, the exchanges are scattered, and it is difficult to form a system and scale effect. Due to differences in national conditions, most exchanges stay at the level of brief introduction of the national situation. Professional and in-depth academic exchanges still exist. In recent years, the Institute has expanded its communication channels, increased the depth of communication, and enhanced the international influence of the Institute through overseas visits to lectures, participation in international academic conferences, and publication of foreign academic works. Gradually, it has the ability to organize a series of lectures by overseas social law experts.

The basic information of each series of lectures this year is as follows: 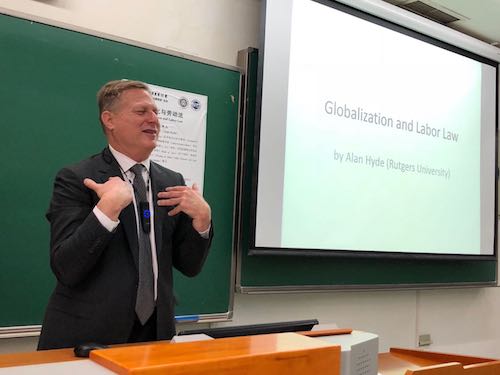 Professor Hyde in the Lecture 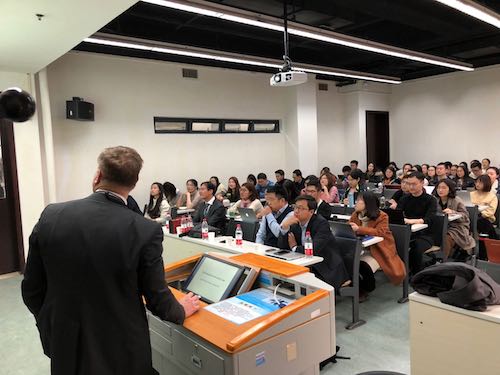 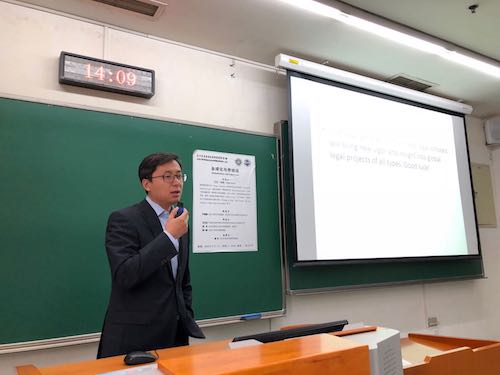 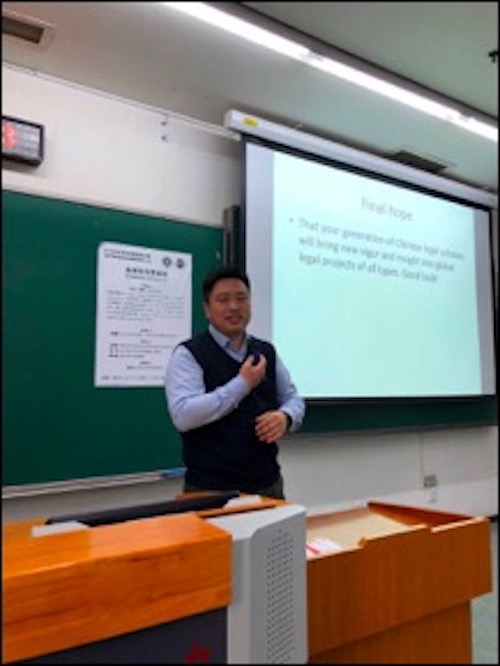 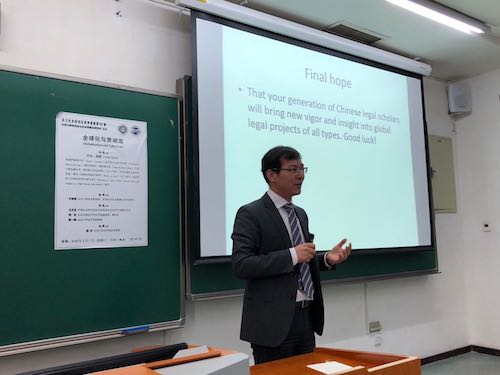 2. On the afternoon of May 16, 2018, the 53rd issue of Peking University Social Law Forum Series was held in Room 302 of Second Teaching Building. The title of the lecture is “Labor Contract Term System – Comparison between the Two Sides of the Taiwan Straits and Japan”. The lecturers are Professor Xiaoxi Kangzhi and Associate Professor Xu Wanning. Professor Xiaoxi Kangzhi is a well-known Japanese labor jurist. He is a professor of law at Meiji University. He graduated from the Graduate School of Law and Political Science of the University of Tokyo with a bachelor's degree. Professor Xu Wanning is an expert in labor law from Taiwan. She is an associate professor at the School of Law of Taiwan University. She graduated from the University of Tokyo with a doctorate in law. Professor Xiaoxi Kangzhi first introduced the characteristics of the Japanese labor market and current policy issues. The biggest feature of the Japanese labor market is that the labor market is divided into two major parts: formal and informal. The Japanese Parliament is reviewing the Work Style Reform Act, which aims to reform the regulation of working hours and improve the working conditions of informal workers. In the future, it may face policy challenges of labor diversity and employment. Later, Professor Xiaoxi Kangzhi focused on the fixed-term labor contract system in Japanese law, including: termination reasons, deadlines, deadlines and renewals. Professor Xu Wanning's lecture focused on the types and limitations of the term labor contract in Taiwan. The specific contents include: the type of time contract and the time limit, the accumulation of the non-scheduled contract and the accumulation of seniority, the accumulation of the term contract, and the end of the regular contract. This lecture was given a welcome speech by the director Ye Jingyi. The research and training institution of the Japanese labor policy research and training institution, Zhong Qi, served as the commentator and translator, and the assistant professor Yan Tian served as the moderator. 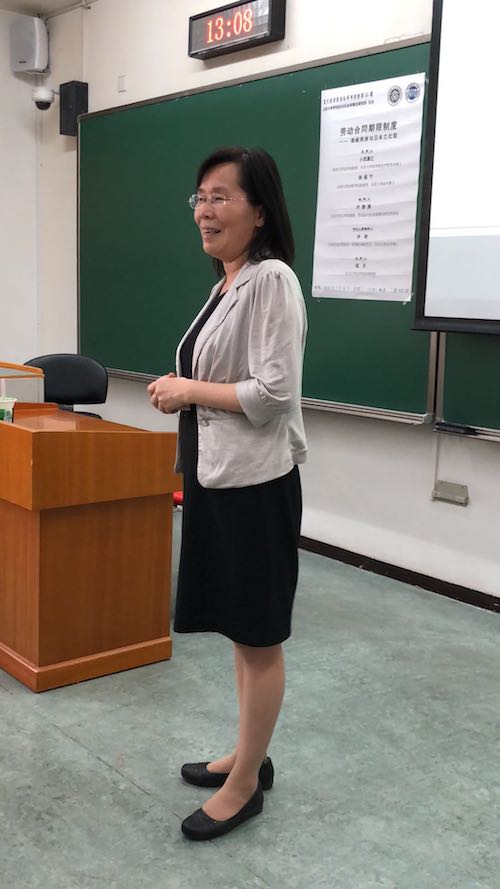 Professor Ye Jingwei in her Speech 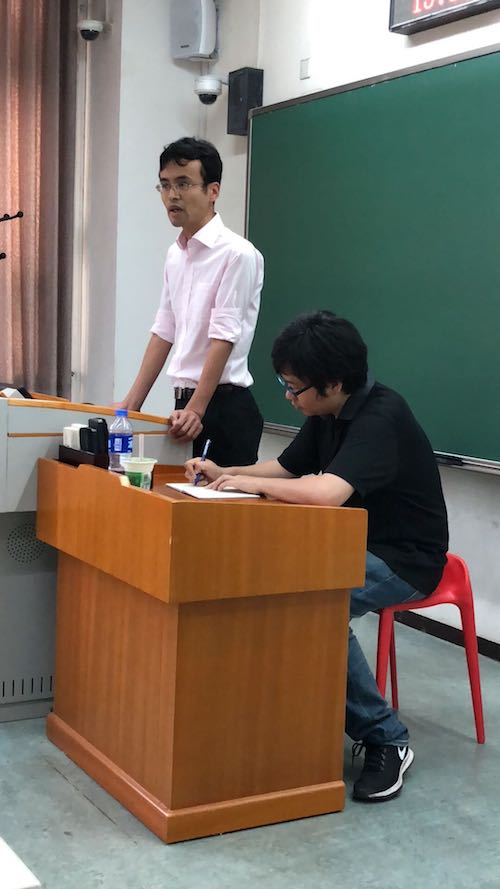 Professor Xiaoxi Kangzhi in the Lecture 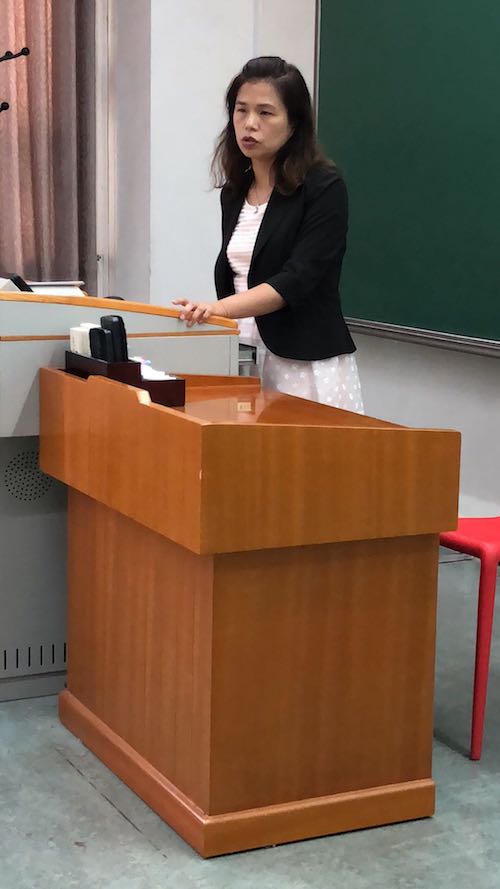 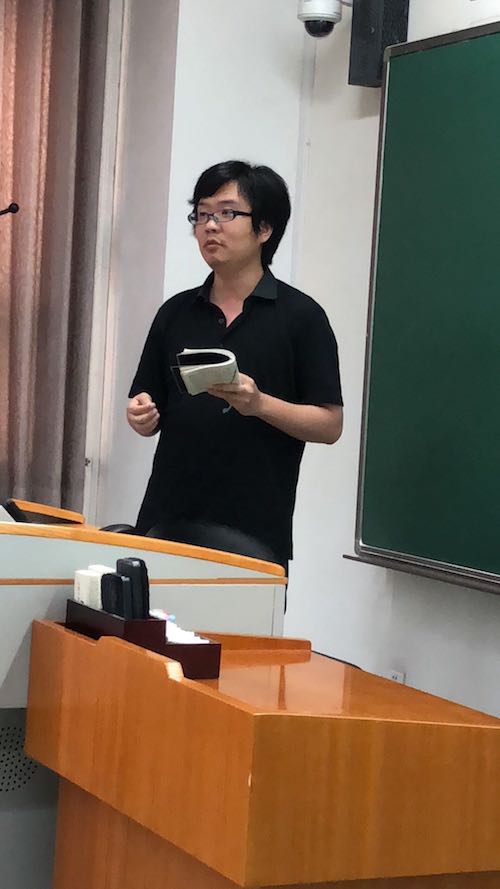 Zhong Qi Researcher in the Review

3. On the evening of May 24, 2018, the 54th issue of Peking University Social Law Forum Series was held in Room B102, Koguan Building. The lecture titled "Social Self-Government as Decentralized Administration in German Social Insurance" was presented by Professor Ulrich Becker. Professor Becker is an important representative of the European and German social law community. He is the director of the Max Planck Institute for Social Law and Social Policy and the academician of Academia Europaea, with the Ph.D. iur. utr. from Julius-Maximilians-Universität in Würzburg and the European Law Institute of the European University Institute Master of International Law Studies (LL.M.). Professor Becker's lectures flowed from historical sources and explained the characteristics and causes of the German social insurance law management system. Then the social insurance law was taken as an example to discuss the trend of administrative decentralization and its significance and value in social self-management. This lecture was greeted by the director of our institute, Mr. Ye Jingyi. Associate Professor Liu Dongmei from Zhongnan University Law School, Associate Professor Lou Yu from China University of Political Science and Law, and Professor Zhu Mingzhe from the Institute of Comparative Law of China University of Political Science and Law. As a commentator, Law School of Munich University, Germany Ph.D. student Wang Yifei is the translator and Assistant Professor Yan Tian is the moderator. 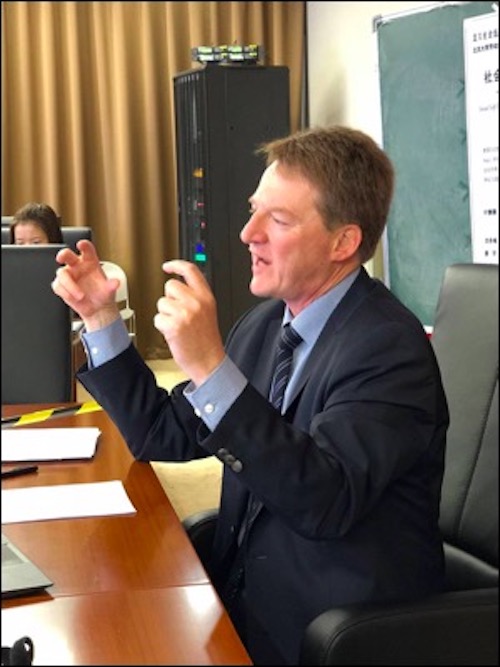 Professor Becker in the Lecture 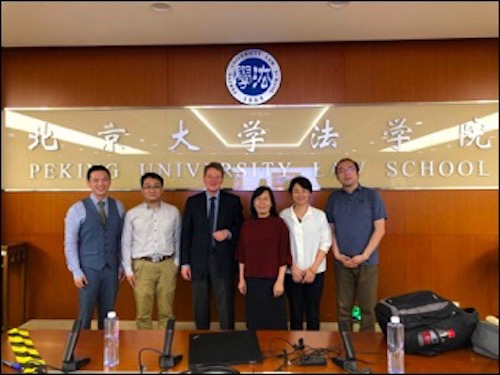 4. On the afternoon of October 17, 2018, the 56th issue of Peking University Social Law Forum Series was held in Room 302 of Science building. The lecture titled "Civil law and Labour Law: in the Ongoing International Debate" was presented by Professor Sean Cooney. Professor Sean Cooney is a well-known expert in international labor law and Australian labor law. He is a professor at the Law School of Melbourne University, Australia. He graduated from the Melbourne University and Columbia University. He is fluent in English, French, German and Chinese. He used to be the Labor Law of the International Labor Organization. And legal experts in the reform team to provide legal reform proposals for Asian countries such as China and India. He has studied Chinese labor law for many years, co-authored with Law and Fair Work in China, and co-edited the Law and Labour Market Regulation in East Asia. Wait for the book. Professor Sean Cooney’s lecture focused on four questions: Why do you need labor law? How to distinguish between labor law and civil law (contract law)? What is the problem with this distinction? And what are the latest developments to solve this problem? In order to answer the above questions, he conducted extensive comparisons and discussions on legislation and international labor standards in China and Australia. Professor Ge Yunsong from our school came to the lecture site, and Assistant Professor Yan Tian served as the lecture host. 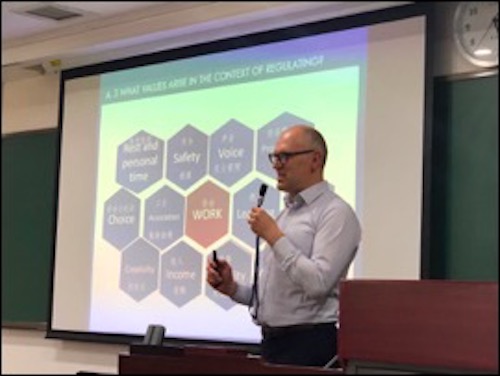 Professor Sean Cooney in the Lecture

5. On the afternoon of November 7, 2018, the 58th issue of the Peking University Social Law Forum Series was held in Room 302 of the Faculty of Science and Education. The lecture titled "European Labour Law and the Challenge of Brexit" was presented by Professor Alan Neal. Professor Alan Neal is a well-known European labor law, comparative labor law and international labor law expert. He is a professor at the Warwick University Law School. He graduated from Warwick University, London School of Economics and Political Science and Gray Law School, and concurrently worked in London Central District. Institutional judge Professor Alan Neal has participated in the reform of labor law in China for many years. He is also a faculty member at Peking University, Zhejiang University and Beijing Jiaotong University. He is the International Journal of Comparative Labour Law and Industrial Relations. He is the editor of the magazine, edited the book "Cross-currents in Modern Chinese Labour Law". Professor Alan Neal divides the development of European labor law into several historical stages: the windward start-up phase (1950s-1980s), the wind-breaking phase of change (1990s), and the current stage of icebergs (2000s to present). He believes that the economic crisis in recent years has led to the risk of the European social policy agenda being put on hold, and the rationality of the Brexit in the UK is deeply worrying in this context. Assistant Professor Yan Tian served as the moderator of the lecture. 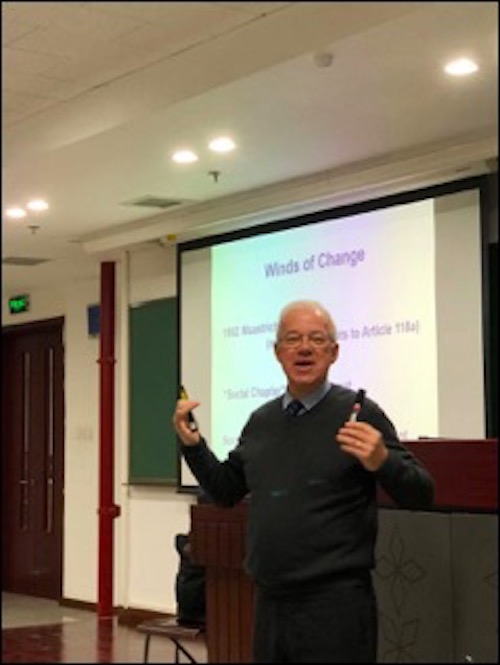 Professor Alan Neal in the Lecture

In order to improve the effectiveness of each lecture, the Institute adopted pre-release and translation lectures PPT presentations, live webcast texts, online release of lectures and other relevant information, and the results were ideal. In the next year, the Institute will continue to enrich academic resources, expand academic influence through various seminars, academic lectures and publications, and maintain and strengthen our school as an important teaching center, research center and academic exchange the status of the center of Chinese social law. 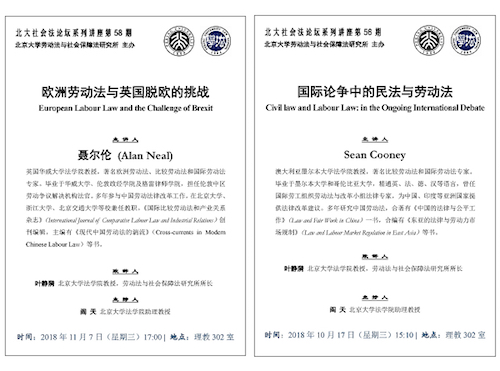