You are here： Home» News» Global» Lecture of Enforcement of Standard Essential Patents in Europe: German Case Law After Huawei/ZTE was Successfully Held

Professor Leistner discussed the attitude of the European Court of Justice on the implementation of the Standard Essential Patent (SEP) from the perspective of the combination of patent law and competition law with issues related to recent development. Professor Leistner first introduced that in the context of the current patent system and technical patents in practice, there are more and more unfair competitions such as patent hijacking. The court also tends to apply the injunction system flexibly to avoid the abuse of patent rights. It can be seen that the competition law has more and more applicable value in the field of patents; for more complicated SEP problems, it is necessary to conduct research from the perspective of the combination of competition law and patent law. In response to the SEP dispute judgment method, the German court developed the Orange-Book-Standard in the early stage, that is, the accused infringer can claim the compulsory license defense when the patentee abuses the market dominance to avoid the court issuing infringement ban. The application of the compulsory license is subject to the FRAND principle under the license conditions of the SEP right holder. In practice, the licensor often proposes that the license requirement is not challenged, and there is a problem of restricting competition.

The German District Court of Düsseldorf questioned whether the above-mentioned standards are in compliance with the European competition law, and explained the request to the European Court of Justice in Huawei Technologies v ZTE (Huawei v. ZTE, hereinafter referred to as “Huawei Case”). In 2015, the European Court of Justice held that the SEP right holder constituted an abuse of market dominance and then applied a compulsory license only if any of the following conditions were met: First, the patentee failed to send an infringement warning to the other party before the lawsuit, or After the infringer expresses his wish to obtain the patent license in accordance with the FRAND principle, the patentee fails to provide a clear and written FRAND license offer; secondly, in the event that the infringer continues to use the patent, the infringer fails to respond to the SEP right in time. The person’s permit is subject to exemption. That is, European Court of Justice considers that when there is a SEP infringement dispute, the patentee and the user must perform the following procedures to implement the SEP compulsory license: (1) the patentee sends an infringement warning; (2) the respondent infringer expresses the willingness to obtain the FRAND permission; (3) The patentee provides a clear and written license agreement in accordance with the FRAND principle; (4) The respondent infringer responds promptly and in good faith (accepting the offer or making a counter-offer in accordance with the FRAND principle and providing a reasonable guarantee).

On the basis of the Orange Book standard, the European Court of Justice refined the SEP compulsory licensing process and put forward more requirements, such as stipulating that the SEP right holder is responsible for the first provision of the FRAND license clause, and the accused infringer can only refuse the original offer. The new FRAND license terms and so on can be found below. This standard also leaves a number of questions, such as its scope of application, whether the licensing steps need to be strictly enforced or flexible, and is the “licensed offer for FRAND principles” a scope or a specific set of license terms? Or ask, after issuing a compatible FRAND offer, do you still recognize a FRAND counter-offer that is different from the aforementioned offer but also compatible?

In response to the standards proposed by the European Court of Justice in the case of Huawei, the British jurisprudence and the German jurisprudence show different attitudes in applying the method. In the recent Unwired Planet v Huawei case, the British court held that the test proposed in the Huawei case in 2015 was a flexible test method, and the FRAND license could be a global license offer; in the Court of Appeal, the judge overturned the opinion of the court of first instance. The FRAND license offer is considered a scope and not a specific license terms. In the German case, the court is more strict in applying the method, requiring the patentee to strictly abide by the licensing steps proposed in the Huawei case, provide infringement warnings and properly provide a license offer in accordance with the FRAND principle.

Comparing the attitudes of the British jurisprudence and the German jurisprudence to the application of the Huawei case standard, we can see that the judges in the UK jurisprudence are more flexible and applicable to the method. They believe that the licensing process of the SEP is a process in which the licensor and the potential licensee propose conditions to negotiate with each other. Huawei The steps in the case are only for reference and need not be strictly observed. Therefore, the court agrees that the two parties reached a settlement in the process of applying for the ban; while the German court requires strict application of the method, and the SEP right holder must first submit the FRAND principle. The license is not allowed, otherwise the injunctive relief cannot be obtained in the subsequent litigation. Therefore, the German court does not agree with the settlement effect reached by the two parties in the process of applying for the injunction. It is believed that during this period, the licensee will be disadvantaged in the negotiation due to the threat of the injunction. The result of the settlement is unfair to the licensee. Comparing the attitudes of both parties, it is not difficult to see that the British jurisprudence is more friendly to SEP holders, while the German jurisprudence is more inclined to protect SEP implementers.

Of course, in addition to the dispute resolution mechanism after the event, the problems existing in SEP should also avoid disputes through pre-emptive measures such as targeted legislation and the establishment of collective management institutions. Different methods have their own advantages and disadvantages. As a fast-growing economic entity, China will inevitably assume an increasingly important role of resolution of SEP in the future. For the different courts and jurisdictions mentioned in the speech of Professor Leistner, Professor Liu Kongzhong has different attitudes and tendencies towards SEP, believes that there is no right or wrong in these case. The kind of policy views are often influenced by historical environment, economic situation and culture. The influence of various factors such as the background; the choice of policy perspective will also change with time. What is important is whether the policy of its choice can effectively meet the needs of social development and resolve disputes. China is now more a recipient of standards than a standard exporter, so it is more of an implementer's role in the SEP issue, and this role will also change over time. Professor Liu Kongzhong also introduced the German legal education system to the students attending the conference. In particular, he analyzed the rigor and systemic advantages of German legal studies and encouraged students to study in Germany for legal exchanges. 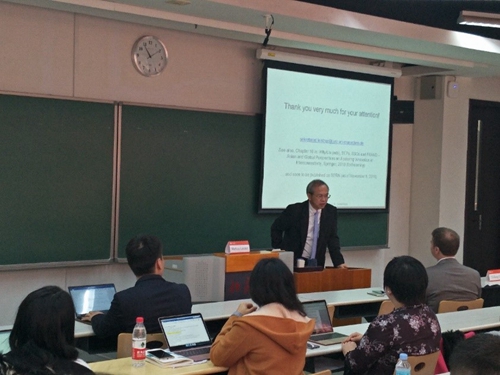 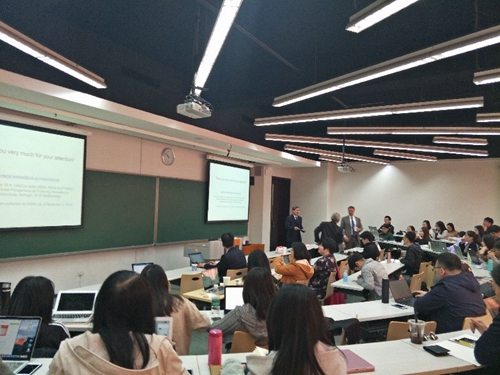 Professor Liu Yinliang also accompanied Professor Leistner and Professor Liu Kongzhong to visit the scenic spots such as Weiming Lake and Boya Tower, and introduced the historical development of Peking University and its law school. Finally they took a photo for this visit . 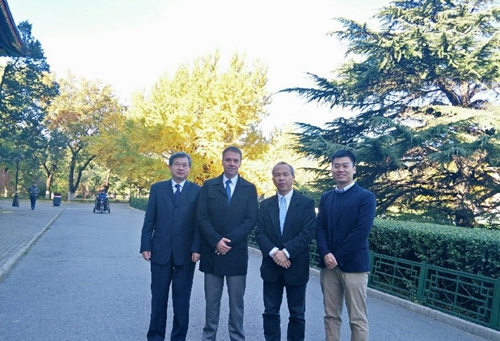