On November 2, 2018, Peking University Law School Student Overseas Learning Exchange Meeting was successfully held in Koguan Building B103. The exchange meeting was widely welcomed by students. Everyone was enthusiastic. Half an hour before the opening, many students entered the meeting one after another. At the beginning of the exchange meeting, the whole audience was full. Professor Guo Li, Vice Dean of Peking University Law School, Assistant Professor Peng Chun, Assistant Professor Zuo Yilu, Assistant Dean and Director of External Affairs Office, Li Yuanyuan, attended the event. 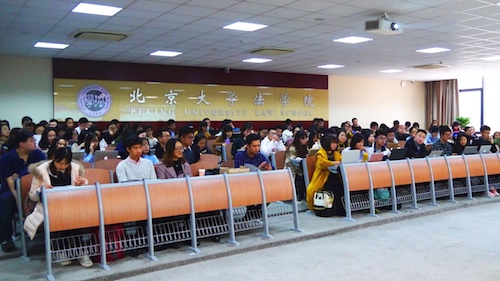 At the beginning of the symposium, Professor Guo Li, Vice Dean of Peking University Law School, delivered a speech. He expressed his expectation that students would "go out and see more" in the University stage. Whether short-term communication or long-term learning, it would be an unforgettable experience in life. He hoped that students would cherish the opportunities offered by the College and chose their favorite projects to communicate with each other according to their own situation.

Professor Li Yuanyuan, Assistant Dean and Director of the External Affairs Office, combed the general situation of cooperation projects between Peking University Law School and famous international universities and institutions from five aspects: semester exchange, LL.M. degree project, summer project, international competitions and internship project, and reviewed the fruitful results on building a wider exchange platform and broadening their international vision in recent years. She also reminded students to keep an eye on the developments of External Affairs Office, and to have a better understanding of the schools and their corresponding projects in advance so as to be able to plan and prepare more calmly.

Then, Peng Chun and Zuo Yilu shared their insights on studying abroad and Anglo-American law education with their classmates. Assistant Professor Peng Chun, who has a master's and doctorate degree from Oxford University, said that British schools are more pragmatic than North American schools. He also admitted that when he first arrived at a foreign country, the high-density, fast-paced and multi-discussion curriculum model made him a little difficult to adapt to, but after a semester of "follow-up", suddenly looking back, he found a lot of benefit. As a graduate of Yale Law School, Assistant Professor Zuo Yilu shared his views on American law higher education with his classmates in an all-round way. By comparing the different characteristics of LL.M., JD and JSD projects, he suggested that students should be able to define their future career direction and make their own choices.

There is still a major innovation in this exchange, which is the student experience sharing session. In this session, the ten students who participated in the international exchange learning project from the four Aspects: exchange project, JD project, LL.M. project, summer project share experiences for everyone. The whole process was carried out in the form of a forum. The atmosphere was very lively. The students were eloquent and always praised and applauded. The sharing session was full of relaxed atmosphere.

Semester exchange: another experience of life

Chen Yang didn’t only go abroad in order to experience another learning environment, but also considered the way ahead better. It has proved that this exchange has helped her a lot. It is not only the progress of learning, but also the cultivation of life ability and self-confidence. She talked about her study experience in the United States, which made audience deeply feel how trivial and complicated many everyday things that sounded very simple would become during the school trip - unlike China, everything has to adapt slowly. But after that, it would be meaningful to think back.

Meng Fanzhe introduced his experience at Cornell University Law School and what he saw and heard when he exchanged overseas. For him, the exchange can reach more students from different backgrounds while receiving the education of Peking University. At the same time, the exchange gave him a deeper understanding of the problems and phenomena that he did not understand before – these are the valuable wealth that exchange learning brings to him.

Unlike the previous two exchanges in the United States, Xiong Nengzi participated in the exchange program at the University of Political Science in Paris in Europe. She wanted to throw herself into a completely different world to exercise herself. In this beautiful city of Paris, Xiong Nengzi also encountered many problems that she never thought about, such as renting a house, traveling and so on. "But when I have experienced these things, I became more determined, and became completely different from what I was before." She said.

The sincere talk of the three classmates inspired the students. They applauded enthusiastically.

JD project: another perspective on the future

Wang Kunyu introduced JD courses, extracurricular life, employment information and other issues that many students concern of Columbia University Law School. Kenny also gave listeners a detailed introduction of all kinds of information in his law school. Their learning experiences are very rich and varied, and they have also studied many degrees besides the law. Their explanations show students the charm of interdisciplinary learning, and let students start thinking about future academic and career planning.

LL.M. project: another way to vocalization.

Two students gave detailed introduction on the LL.M. project and preparation process in all aspects. Niu Xinyu introduced her experience of taking the New York Bar Examination, and told students what is the power of "self-discipline" and "perseverance". During her study abroad, she showed her foreign classmates what is Chinese students' glittering point of courage to speak and self-confidence, which made students on the spot be proud of her. Zheng Shufeng introduced the dual degree program of Peking University and Hong Kong University to let students know more about the University of Hong Kong.

Summer Project: another way to see the world

The summer program has attracted a large number of law students for its time saving and rich content. Xu Youwei, a Grade 2015 undergraduate of Peking University Law School who went to attend American Commercial Law Training Program Summer Program of Columbia University in 2017 summer vacation, Chen Zhuowei, a Grade 2016 undergraduate of Peking University Law School who took part in overseas internship program in Prague, Czech Republic in 2018 summer, Wu Yuyang, a Grade 2018 master of law of Peking University Law School who participated in the summer project of maritime law in Bergen University of Norway of 2018 summer internship program, introduced the summer project they participated in in detail, so that audience would see the advantages of the project. "Whether it's a semester exchange or short-term exchange, it's the students’ choice. There's no one who is superior or inferior, and they can go to see the outside world. The summer time is short, but it will bring you deep experience. "

The meeting was concluded with warm applause. Through this exchange meeting, students not only learned about the fruitful results of internationalization of Peking University Law School, but also learned about the details of various international exchange projects, which can be said to be fruitful. External Affairs Office hope this exchange can provide a platform for students to contact this world, so that students have more confidence to embrace the outside world!