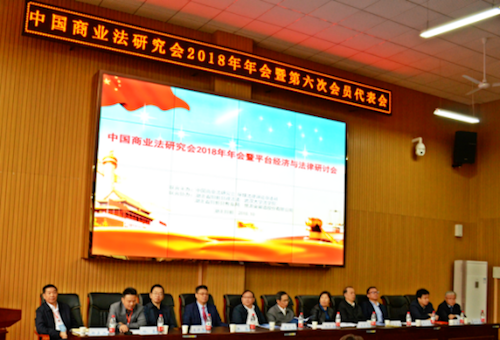 At 8:30 in the morning, the opening ceremony of the conference started on time. The opening ceremony was presided over by Professor Xu Mengzhou. Leaders including Zhu Xiaoqing, Wan Xuebin, Zhou Hanhua, Wan Ding, Sun Jin and Gan Peizhong made speeches.

Vice President Zhu Xiaoqing first made a speech. He pointed out that the theme of the annual meeting was focused on the national development strategy and the major social concerns, which had distinct theoretical value and practical significance. He hoped that the Chinese Commercial Law Research Institute would strengthen the ideological and political guidance in the future development, adhere to the correct political direction of legal research, focus on the main business, serve the overall situation and strengthen the construction of the talent system. To create new achievements and make new contributions in the great practice of comprehensively administering the country according to law.

Wan Xuebin, executive vice president, delivered a speech on behalf of the Hubei provincial law society. In his speech, he first welcomed the Chinese Association for the Study of Commercial Law to hold this year's annual meeting in Hubei, and stressed that we should adhere to Xi Jinping's thought of socialism with Chinese characteristics in the new era as a guide to study the important issues in China's economic development in the new era, and bring enlightenment to theoretical research and practice.

Then, under the chairmanship of Hu Jihua, the former inspector of the Civil Law Office of the NPC Law and Industry Commission, Vice-President Yu Zhengping of the Third Circuit Court of the Supreme People's Court, Prof. Wang Yong of the School of Civil and Commercial Law of China University of Political Science and Law, and Deputy Dean Xue Jun of the School of Law of Peking University made keynote speeches respectively. Vice-President Yu Zhengping first affirmed the theme of the seminar. He believed that the theme of "platform economy and law" reflected the new industry patterns emerging in the current economic development process, and was an important issue in the legislative and judicial work that urgently needed to make institutional improvement and innovative solutions. He then shared his experience in dealing with various platforms of economic disputes that he had come into contact with in the Circuit Court. Prof. Wang Yong's speech focused on the dilemma and reform direction facing the development of private enterprises. He pointed out that the predicament faced by private enterprises originated from Sino-US trade war, financing dilemma, competition between private enterprises and state-owned enterprises, capital flight. Faced with these problems, we should expand investment in enterprises for the people's livelihood, especially in medical, educational, health and other livelihood projects. Private enterprises should compete with state-owned enterprises in a neutral way, and at the same time, strengthen cross-border capital flows. Prof. Xue Jun's speech interpreted the latest electronic commerce law. He said that e-commerce can help solve the problem of information asymmetry and optimize the allocation of resources in the process of production and sales by means of network technology; however, the link of network supervision is still relatively weak. Platform business operators should disclose commodity or service information comprehensively, authentically, accurately and timely to protect rights to know. Right of choice.

At 5 p.m., the closing ceremony was held, presided over by Prof. Peng Bing, Deputy Dean and Secretary-General of the Institute and Peking University Law School. At the closing ceremony, an award ceremony was held for the awarding of outstanding papers by young scholars organized by the conference. Six teachers and students, including Assistant Professor Li Anan of Wuhan University Law School, were awarded. Finally, President Gan Peizhong made a final speech and once again expressed his sincere thanks to present guests and staff. He reviewed the whole process of the past year from preparing for a new term to the final completion of the work. He proposed to implement the spirit of Vice President Zhu Xiaoqing's speech, firm faith, concerted efforts, with the greatest enthusiasm for the rule of law for the country to build more academic achievements on the future research work of the Commercial Law Institute, The meeting was successfully concluded with warm applause.