On July 14, 2018, more than 100 Law School alumni from the grade of 2005 returned to their Alma mater from all over the country to reunite in Yan Yuan. Pan Jianfeng, Dean and Party Secretary of Peking University Law School, Gong Wendong, Director of the Office of President of the Party Committee of Peking University, Lu Jiangnan, Vice Party Secretary of the Law School, Prof. Zhu Suli, Guo Zili, Sun Dongdong, Zhan Zhongle, Zhang Xiaojian, Lou Jianbo, Director of the Alumni Work Office, Dang Shuping, Deputy Director, Lu Xinxin, attended the event. The event was held by the 2005 law master alumnus Yang Zumin. Before the Activity, the Teacher and the Returning Schoolmate Took a Photo in Front of (Leo) Koguan Building The event officially began at 14:30 p.m. The host introduced the preparation of the homecoming activity in detail to the participants, and thanked the 13 students who contributed to the activity and the college for their strong support. 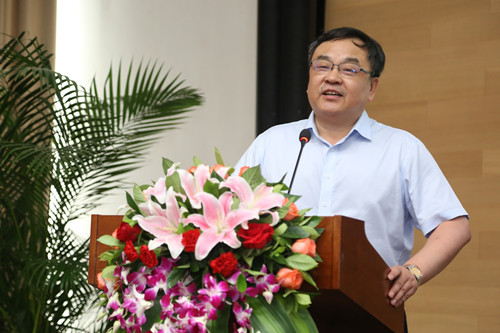 Firstly, Dean Pan Jianfeng addressed. On behalf of all the students and students of the Law School, Mr. Pan welcomed the alumni to go home. He introduced the faculty, teaching and research, infrastructure construction, legal master training and other development and construction of the Law School in recent years. Pan said that the alumni were a group with special "blood ties" and thanked the alumni from all walks of life for their support to the development of the college. He said the Law School has established 17 alumni chapters across the country, and will continue to increase this year, to unite alumni and help the Law School and alumni common development, and he hoped that everyone would have time to return to Alma mater. Mr. Guo specially ended his vacation in other places and participated in the homecoming activity. Mr. Guo, on behalf of all the teachers in this class, welcomed everyone. He said, during the ten years, students had walked through all kinds of doubts and worries in their hearts when they graduated, and the road of progress became broader. Applying book knowledge in class to life was a serious challenge. The hands were more diligent in thinking than the brain. Mr. Guo encouraged everyone to use their knowledge to serve the society and the people, and consciously connect the individual's destiny with the country's destiny and the nation's destiny, instead of standing still and staying out of social problems. Mr. Guo reminded everyone to enjoy life while striving, and to slow down the pace of life and combine work and rest in the thirtieth year. Mr. Lou said, the reunion after 10 years, for teachers and students are an unexpected surprise. Mr. Lou recalled the experience of getting along with everyone in the real estate law center and commercial law center ten years ago. He was impressed by his students' diligence, optimism and strength, and was lucky to meet those who knew gratitude and long feelings. Mr. Lou said that as ordinary people, we struggle and struggle in the same era, supporting the elderly, raising children, accompanying family members, wished everyone all the best. Mr. Zhan said that as the alumni of the Law School, we should match the title of legal person of Peking University, do what we can for the society, and let the society feel the profound love, great love and great kindness of legal person of Peking University. As a member of the professional community, alumni should safeguard fairness, justice and not be afraid of power. He wants everyone to maintain a healthy body and an open mind, find happiness and enjoy life. 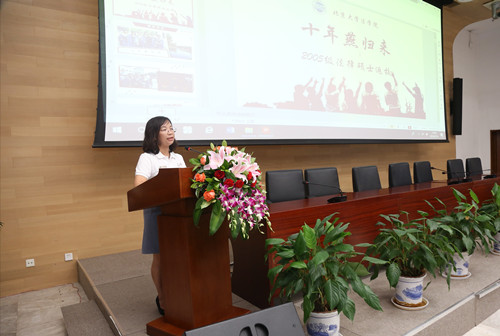 The Representative of Alumni Xu Bing Delivered a Speech

Miss. Xu spoke on behalf of 2005 Law Master Alumni. Xu bing's speech on the theme of "cohesion and warmth" represented everyone's heartfelt wishes. First of all, she paid tribute to all the teachers and thanked them for leading us into the palace of law and teaching us the knowledge of law, the spirit of law and the essence of law. At the same time, she believed that the alumni should also thank each other, to be able to get together in such a weekend, to review the feelings accumulated in the bottom of the heart, but still fresh, can come to relive their original heart. She hoped everyone can stay together all the time. She hoped this collective can warm everyone. 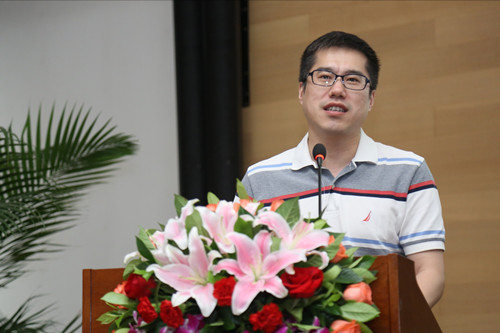 Mr. Lu introduced the work of alumni briefly. When the alumni association of the Law School was established 20 years ago to celebrate the centenary of the university, "gathering alumni, serving alumni and assisting alumni" was the main line of alumni work. It was hoped that through various forms of communication, local branch construction and professional branch construction, contacts and services will be strengthened. The construction of alumni information platform was also being tested. It would be launched soon, and the regular communication would be realized by the alumni gathering different industries, different professions and different interests. Mr. Lu said that the Law School have achieved gratifying results in QS rankings in recent years, with alumni making important contributions. In the end, each of the alumni who participated in the homecoming activity gave a brief introduction of their work and family. The alumni also visited the law library and the Courtyard with great interest. Schoolmates Took a Photo in the Courtyard of Guoshuang