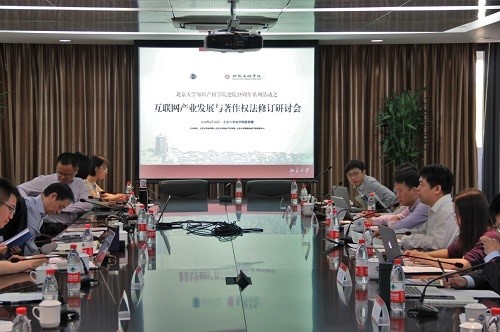 This meeting received a letter from the former president of Zhongnan University of Economics and Law. Professor Wu Handong, on behalf of the Intellectual Property Law School, congratulated the 25th anniversary of Intellectual Property Institute of Peking University and wished the conference a complete success. Professor Yi Jiming delivered the opening speech for this conference.

This meeting was divided into three themes. The first theme is " the Revision of Copyright Law in the Internet Age ". Under the auspices of Professor Yi Jiming, Professor Wan Yong who is from Renmin University Law School、Mr. Liu Ping who is the deputy director and general legal counsel of the Chinese Music Copyright Association、Professor Yang Ming who is from Peking University Law School and Mrs. Liu Xiaochun who is the executive director of the Internet Rule of Law Research Center in the University of Chinese Academy of Social Sciences made the corresponding theme speech respectively. Professor Li Yufeng who is from Southwest University of Political Science and Law and Professor Xiao Zhiyuan who is the vice president of Law School of Zhongnan University of Economics and Law participated in this talk. At the end of the talks, the participants held a heated and free discussion on the subject.

After the tea break, it went into the last theme of the speech. The third theme of the speech was "Industrial Competition and the Application of Copyright Law". Vice Professor Xiao Zhiyuan, the vice president of Law School of Zhongnan University of Economics and Law, presided over the speech. Vice Professor Cui Guobin, who is the vice dean of Tsinghua University Law School and Mr. Guo Kun who is the director of the National Audio Visual Copyright Collective Management Association spoke successively. Professor Yang Ming from Peking University Law School participated in the meeting. At the end of the talks, participants attended a heated and free discussion on related issues.

Finally, Professor Yang Ming gave a summary of the conference, appreciated the guests for coming, and hoped that there would be more opportunities for further exchanges in the future. The seminar was heated and attracted many teachers and students. The meeting lasted for a day and ended in the heated discussion of the guests.