Series lecture"Criminal Integration" sponsored by Peking University Institute of Criminal Law was held successfully in Classroom 311, 2nd Teaching building. A.P. Jiang Su from the PKULS hosted the lecture. The reporters were two professors from the Law School of University of Osnabrueck, Prof. Sinn and Prof. Ge Xianglin. This German report was translated by Tang Zhiwei, a doctoral student of PKULS. This lecture was funded by the Yang Chunxi Law Education and Research Foundation.

After a brief greeting, Prof. Sinn reported on the topic of “new and old secret investigative measures”. In this report, Prof. Sinn began with the telecommunications communication supervision(Telekommunikationsüberwachung). After that, he introduced two mandatory measures introduced in the German Criminal Procedure Law in the summer of 2017.

First of all, Prof. Sin pointed out that telecommunication communications supervision plays an important role in the German practice sector. Many facts and evidence are obtained through telecommunications communications supervision. Many crimes, such as capital market crimes, murders, and intentional homicides, will be carried out through telecommunications. Telecommunication monitoring is conducted based on specific conditions without the informed of the parties. In detail, it includes the following three conditions: (1) There must be a specific fact (bestimmte Tatsachen), which is sufficient to prove that the perpetrator was a positive offense or an accomplice. (2) The case belongs to a serious criminal offense (schwere Straftat), Article 100, paragraph 2 of the Litigation Act provides specific provisions for such crimes as murder, intentional homicide and treason, etc.; (3) It may be very difficult or hopeless to find out the case or investigate the defendant's location in other ways. The reason legislators have imposed so many restrictions on this subject is that, for example, comparing it to a home search (Wohnungsdurchsuchung), the defendant was present in the case of searching the house; but in the case of secret investigation, it was not like so. This also led to the German law adopting a relatively high level of legal reservations for secret investigations, namely the principle of retention of judges.

In the final summary, A.P. Jiang Su mentioned that China has similar problems with communication supervision, but there is no such detailed regulations as the German law. Therefore, China should learn more from foreign countries. 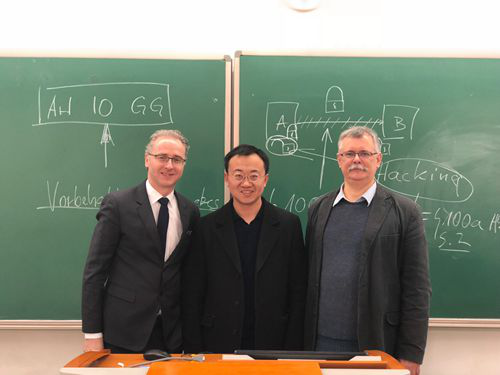 In the second report, Prof. Ge Xianglin vividly described the 100-year reform of property confiscation in German criminal law within a short period of one hour.

In the summary, A. P. Jiang Su pointed out that the confiscation and pursuing of the German law is independent of the penalty and security measures, and its target is different. In China, the study of confiscation system is very rare, but in practice, it is of high importance and there are many problems. Therefore, Prof. Ge’s lecture is very instructive for China’s related issues.