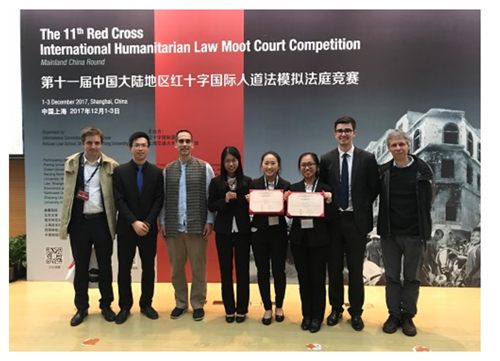 During the preliminary round, Peking University team members prepare fully and calmly deal with, in many participating teams come to the fore. Although regret in the semifinals lost, but in the intense bronze medal match, players actively adjust their mentality, in the face of the judge's chase and opponents sharp counterattack, methodical, flexible defense, demonstrated a solid legal foundation , Clear logical analysis ability and accurate on-site response ability, got highly praised by judges and finally defeated Fudan University team, won the third place of this competition.

Since its establishment in 1863, the ICRC has promoted and developed international humanitarian law as one of its core activities. The ICRC delegation in East Asia has been running the IHL Moot Court Competition in mainland China since 2007 with the aim of promoting IHL in colleges and universities and establishing good teaching in the field of international humanitarian law through cooperation with academia And the tradition of research, so that young students who will eventually become the next generation of leaders to create a more perfect humanitarian world. This competition is jointly sponsored by the ICRC and Shanghai Jiaotong University. A total of 33 teams from mainland China participated in the competition, which once again set the maximum number of teams to be re-established.

I wish Peking University's team a great success in the race for the ICRC Tribunal in Asia Pacific in 2018!