On the 3th morning，Professor Elsner analyzed the limitations of mainstream economics in the paradigm of research, pointed out that the assumptions of mainstream economics, abstract rank and linear thinking that cause complex and diverse social phenomenon become simple, and thus can not accurately analyze social problems. In order to overcome the limitations of mainstream economics, complexity economics, with the help of brain neural network research and other complex scientific methods, analyze the social phenomenon as a nonlinear dynamic non-equilibrium system. On this basis, Professor Elsner introduced the relevant research methods, and combing the complexity of economics from simple systems, unorganized complex systems to organized complex system development process, pointed out that the economic phenomenon in essence belongs to the scope of complex adaptive systems.

On the 4th morning, Professor Elsner first combed the economic ethic view from Smith, Marx to Vernon, Mou Dahl, and pointed out the influence of Darwin's theory of evolution on economic theory.

Then, Professor Elsner introduced the complexity of science on the "black swan phenomenon" and other social problems analysis method, and then from the use of Qwerty keyboard, students helped each other to take notes and other daily phenomena, introduced the choice of theory, cooperative evolution path, analyzed the demand conditions of the optimal cooperation mechanism, and pointed out that compliance with the laws and regulations of behavior is in line with interests of the perpetrators in the long run. And once a group has expectations for future re-engagement, then the group is more likely to take into account long-term interests, and many social dilemma will be resolved. Thus, from a governance perspective, the complexity of science, represented by complex economics, can provide some effective programs for social governance.

The interactive atmosphere of the two lectures was warm and the teachers and students asked questions enthusiastically, and Professor Elsner answered one by one. This series of lectures ended in applause. 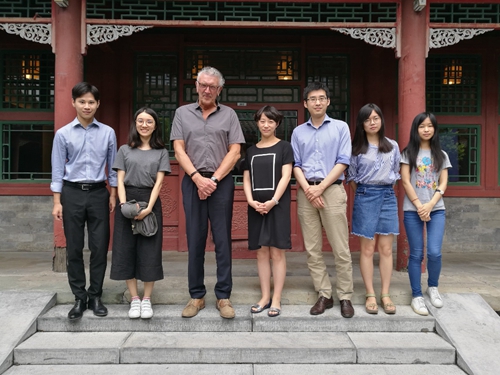