On May 17 to May 19, 1917, the 14th annual meeting of the Asian Law Students’ Association (ASLI) was held in Manila, the capital city of Philippine. Guo Li, Vice Dean, attended the related activities on behalf of our institute. ASLI aims to support the development of legal education and research in Asia and to build a platform for jurisprudential circle of Asia-Pacific region to communicate and cooperation. The Council of the institute held on the 17th considered the important issues of the previous year, and spoke highly of the success of Peking University Law School in holding the 13th annual meeting. They decided to receive the University of Tokyo and other two well-known law school to become the governing unit. 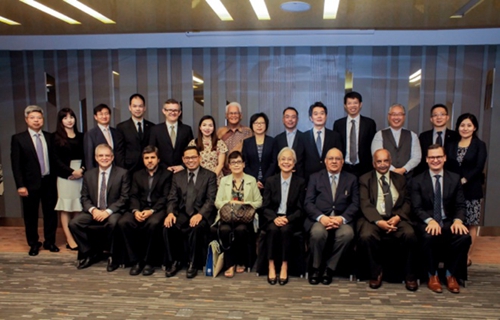 The annual academic forum was hosted by the University of the Philippines on 18th -19th, with the theme "A Uniting Force? - Asian Values and the Law". Prof. Danilo L. Concepcion, the President of University of Philippines and the Dean of Law School and Prof. Gary F. Bell, Director General of ASLI gave address. Prof. Raul C. Pangalangan, former Dean of the Philippine Law School and incumbent judge of the International Criminal Court in Hague gave an excellent speech. In the next parallel forum, Professor Guoli was invited to host the group discussion of "company law and corporate governance" and gave a special report in the “legal and economic development” sub-forum, introducing the research result of Chinese financial regulatory system. The whole study ended in a warm atmosphere and the Korea National University of Seoul will host the next annual meeting.

During his stay in Australia, Vice Dean Guoli was also invited to visit the Asian Development Bank (ADB), headquartered in Manila, and deeply communicated with Mr. Cheng Zhijun, Executive Director of the Asian Development Bank, Mr. Toshio Oya, Head of Human Resources and Mr. Ramit Nagpal, Deputy General Counsel. Mr. Guo reviewed and praised the achievements and contributions of the ADB since the establishment of 50 years and introduced the situation of our law school in personnel training, research services and other aspects, especially the cooperation project that carried out with international organizations. The participating leaders of the ADB hoped Peking University Law School to play a greater role in the development of the ADB and welcomed more outstanding students to join the ABD for working or internship.

Mr. Guo also visited several school fellows who had been working in Manila. Chinese LL.M. project currently has five Filipino graduates, serving in the Ministry of Foreign Affairs of Philippines, office of the public prosecutor, universities and law firms respectively. Everyone is very concerned about the recent status of his alma mater. They all recalled the unforgettable learning time in Peking University together when they met and sent the best wishes to the Law School and the teachers and students.