In April 21, 2017, Students in PKULS Comparative Civil and Commercial Law Courses visited the Korea Pohang (China) Investment Co., Ltd. (POSCO-CHINA) China headquarters, having a close contact with one of the world's top 500 enterprises——POSCO.

POSCO, the world's top comprehensive steel plant, with world’s first annual output Pohang and Gwangyang iron-making Corp, invests and builds factories in China, Vietnam, Central and South America and other regions, having been in the leading position in the global integrated iron and steel enterprises. In 1991, POSCO set up a Beijing representative office. In the late 90s POSCO began to invest and build production base and processing center. So far, POSCO has more than 50 investment companies, has accumulated up to 4.5 billion investment in China.

POSCO Greater China Chairman and General Manager Zheng Changhe and colleagues on behalf of the company warmly welcome the PKULS teachers and students. The section chief Jin Ying introduced POSCO investment in China, brand value, the future vision and so on to the teachers and students. Then chairman Zheng Changhe personally told the POSCO as a representative of the Korean state-owned enterprises how to successfully complete the privatization reform. Through the chairman’s vivid explanation, the students understand how difficult the South Korean "King of Steel" Pu Taijun to create POSCO and the development and expansion of POSCO to complete the successful transformation, having a new understanding of POSCO.

Chairman Zheng Changhe tells the privatization of the company The students visit the publicity Center 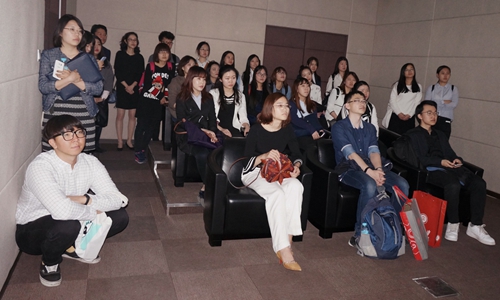 The students watch the image data