Before the meeting, Vice President Li Yansong met with Lord Thomas and his entourage in the courtyard of the law school. Law School Dean Zhang Shouwen, Vice President Guo Li, Yang Xiaolei, Professor Zhang Qi, Lou Jianbo, Assistant Dean, Director of Foreign Affairs Office Li Yuanyuan attended the meeting. During the meeting, Vice President Li Yansong introduced the development status of the law school in the liberal arts departments of Peking University, and hoped that the arrival of Lord Thomas would be able to provide better cooperation opportunities for the development of law school. Lord Thomas thanked Vice President Li Yansong for his meeting and saidPeking University Law School is the first law school that the delegation should visit at the invitation of the Supreme Court and it is the best law school in China. The delegation was pleased to learn that Peking University and Peking University Law School had established cooperative relations with many universities in the UK, carried out student exchange and teacher exchange visits, and believed that the exchange of students and teachers between Chinese and British universities would be more closelyin the future. 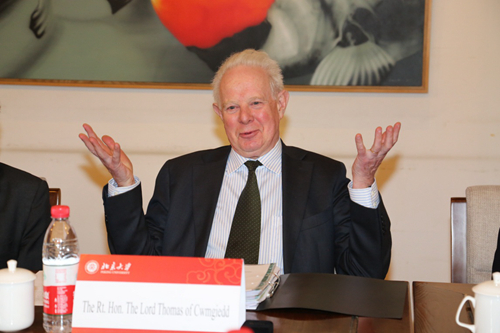 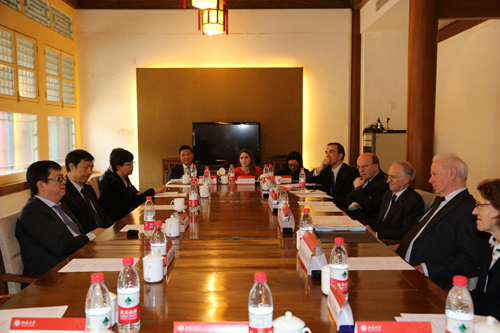 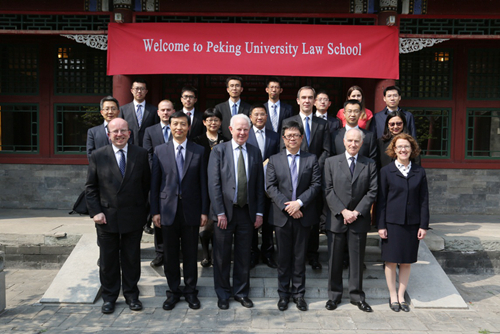 
Subsequently, Lord Thomas and his entourage visited the Peking University Clinic Law Experimental Teaching Center with great interest. The teachers and students representatives of the Experimental Teaching Center introduced the social value and influence of the legal clinic students' cooperation and teacher guidance, and the significance of the clinic curriculum experience for students' growth and future career choice, and also introduce the relationship between the university clinics and the cooperation situation of the law firm and other institutions 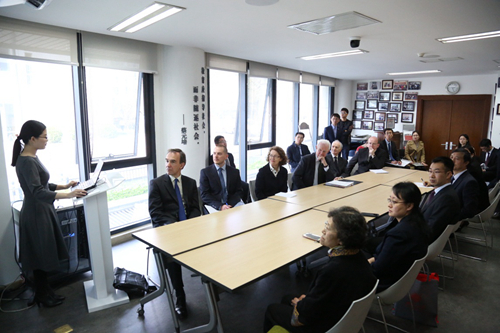 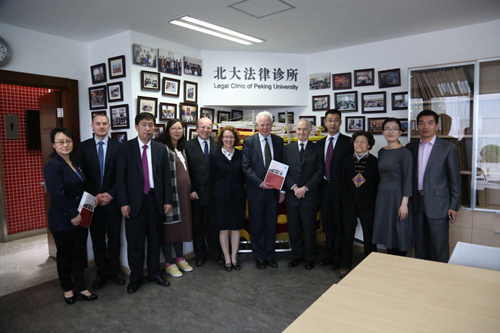 
At 14:40 pm, Lord Thomas and his entourage came to the Constitutional Court, and the students showed great interest in the "face-to-face meeting with the senior judges of England", mimicking the courtroom. Law School Dean Zhang Shouwen on behalf of the teachers and students warmly welcome the delegation's visit, he said that Beijing University Law School as China's highest degree of international law school, hadestablished cooperative relationships with the University of London (University College London), King's College, King's College London, Queen Mary, University of London, and many other elite colleges and universities in the United States. The visit of the delegation of the judges will play an important role in promoting the internationalization of law schools and will facilitate the cooperation between law schools and academics and practitioners in the UK. 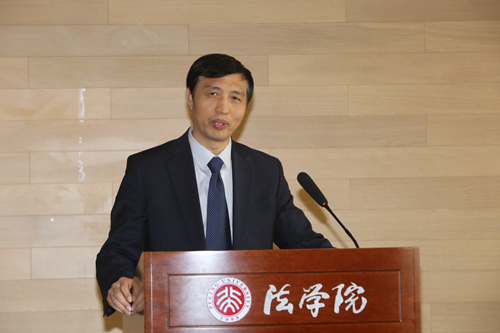 Judge Thomas, Robin Knowles, and Sir William Blair participated in the eventas major guests, respectively, delivered a speech. Lord Thomas delivered a superb speech entitled "Protecting Everyone's Opportunity for Justice". He stressed the importance of ensuring the right of everyone to obtain judicial relief and concisely described it from nine aspects: the ability to protect everyone's participation in justice, the construction of well-trained judges, the improvement of court hardware facilities, the reduction of trial fees, Reduce the cumbersome procedures; encourage public assistance; use of Internet technology; ensure the implementation of strong; and ultimately cultivate the whole society, the basic concept of justice and justice. Lord Thomas pointed out that the protection of justice is not only related to the judiciary, what is more important is to arouse the whole society's efforts and concerns in order to build a good rule of law society. 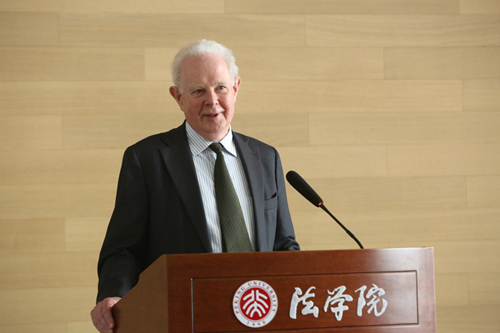 The speech of Lord Thomas

Judge Robin Knowles established the first national legal aid center in the UK in 2010 and has been concerned about public assistance for a long time. He delivered a keynote speech entitled "Legal aid to protect public welfare", affirmed the results of legal aid work of Peking University Law School, and analyzed the problems and related countermeasures of legal aid in the light of the experience of relevant work in the UK. Judge Knowles pointed out that a more systematic and professional aid distribution system should be established to encourage the participation of legal persons in a variety of forms and to introduce new technology support. He argues that the quality of the judicial process and the opportunities for public participation in justice are important, and public legal aid is a key part of it. He hoped that China and Britain would strengthen exchanges and cooperation in the future and wish China's legal public welfare activities to flourish. 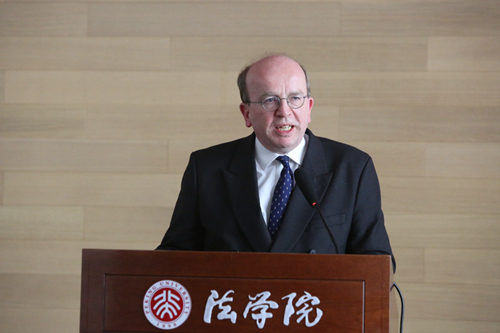 The speech of Judge Robin Knowles


Sir William Blair was invited to become an outstanding visiting professor at Peking University Law School in January 2017. The "face-to-face with senior English judge" was Sir William Blair's first lecture at the law school. He emphasizes the cooperation relationship between the judiciary and the legal academic, emphasizing that law schools can promote legal progress through academic research, improve the legal lag; transport talent for the legal system, and provide different legal views. He is in favor of Judge Horace's interest in public interest law very much and argues that law schools can play an important role in it. At the same time, he also recalled his experience as a visiting professor at other law schools and looked forward to further exchanges with Peking University Law School in the future. 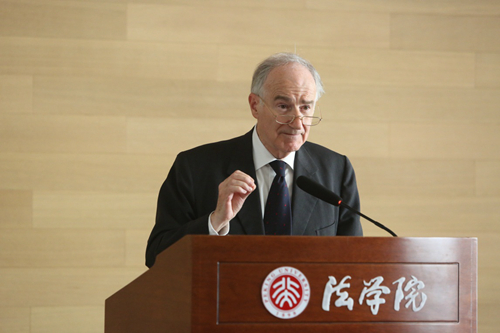 The speech of Sir William Blair


Prof. Zhang Qi commented on the speeches of the three judges on behalf of Peking University Law School teachers. He is very grateful to the insight of the three judges, hoping that the judges can share the contents of the speech for more students of the Peking University Law School and the legal profession to learn. Professor Zhang Qi strongly agrees with the judges' views, especially stressed the importance of public welfare assistance to society and the close relationship between justice and other parts of society, and hoped that the legal community can form a close legal community to promote the progress of the rule of law. 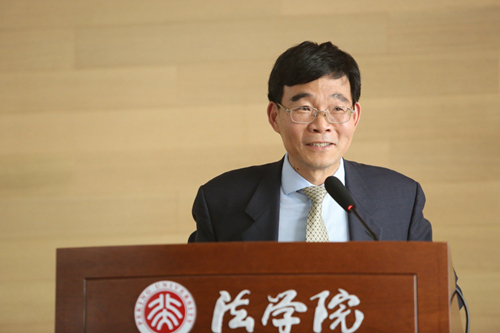 The comments of Professor Zhang Qi 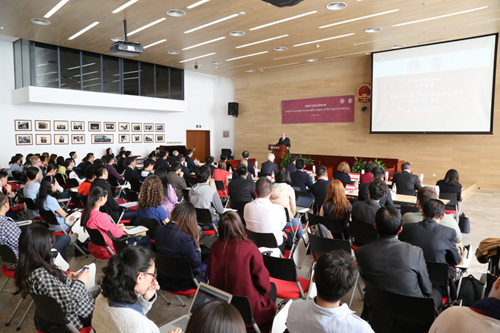