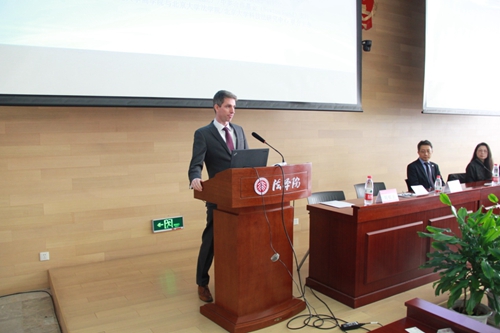 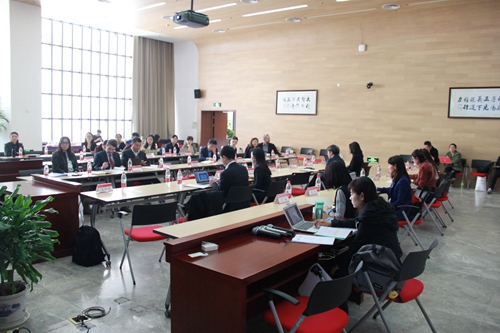 The seminar was presided over by Prof. Liu Yinliang. Prof. Guo Li, the vise president of PKULS, delivered the welcoming speech. The British Embassy senior intellectual property Commissioner Tom Duke gave an opening speech. Shen Xiaobai, a Prof. at School of business, University of Edinburgh, the project host, describes the starting point, objectives, and preliminary results of the study.

Nowadays, with the rapid development of digital and network technology, the development of creative culture, especially music, literature, film and television, has shown a new opportunity in the West since twenty-first Century. At the same time, it also brings a subversive challenge to the original cultural industry. In such a technological environment, there is a great deal of debate about whether intellectual property protection promotes innovation in the European and American academic circles. In contrast, Chinese digital and networking is started in a relaxed environment. This study is from this starting point to study the situation in China. Because in China, the intellectual property protection system is a parking lot. The research team also took this issue to explore the role of digital and networking technology and the participation of Internet companies in the development of China's creative culture industry.

Prof. Zhang Fengyan from Communication University of China, the researcher Guo Wanchai from Media Research of Beijing Academy of Social Sciences, general secretary Zhang Qinkun from encent, Prof. Filippo Gilardi from Ningbo branch of University of Nottingham and other experts and scholars as well as representatives from management and industry attended the seminar. Respectively from the business model, economic environment, industry background, legal and policy aspects, they delivered speeches and discussion on the current situation and development of digital copyright protection of creative cultural industries under the Internet environment.

There is a consensus among participants that Chinese Internet market showing a hundred flowers bloom situation. Especially in the existing emerging service and business models endlessly, it is considered that the Internet company plays a very important role in the development of cultural and creative industries. At the same time, participants also discussed whether the strengthening of copyright protection will have a negative impact on the Internet market. They discussed the duality of value. The first is to improve the social development and people's spiritual life value. The second is the commercial profit and the value of economic development. On the second question, we put forward different views and opinions from different angles. Some people compare China's current Internet music, literature, film business services model with the European and American music platform business model, like Spotify. Some also discussed about the piracy and infringing problems brought by technological development in the Internet environment, the training of users' consumption habits and the corresponding laws and policies, and the cultivation of new business models of cultural and creative industries. In the intense discussion, they have made a lot of constructive comments on the prospect of China's development.

The seminar was successfully concluded in an endless atmosphere. For China, in the drawing experience from Europe and America, at the same time, they showing great confidence in actively exploring innovative characteristics business and legal regulation mode, as well as in the development of creative cultural undertakings and industries. 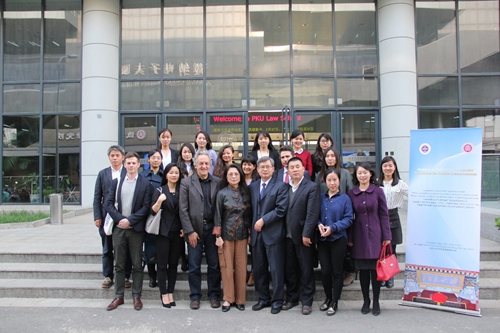