On March 11th, the 15th session of the Red Cross International Humanitarian Law Moot Court Competition concluded at Hong Kong High Court. The competition lasted four days, jointly organized by the Red Cross Society of Hong Kong and the International Committee of the Red Cross, a total of 24 universities of 21 cities from the Asia Pacific region participating in the competition. As the domestic championship in 2016, Peking University team, composed of teachers and students from Peking University law school, harvested in the competition with the championship in the practice simulation part, the second best defense pleadings in the moot court, and Li Xiaolan wining the third best players. 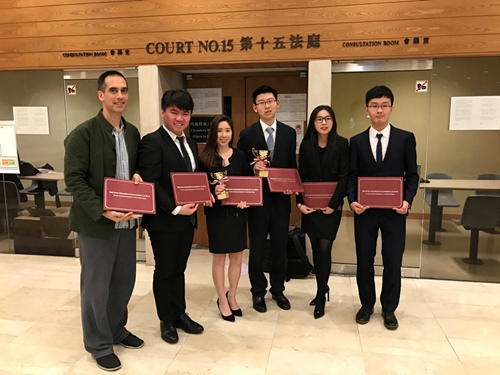 The competition is divided into two parts of moot court and practice simulation. In the respect of moot court part, in the preliminary round, with full preparation, calm mind and flexible response, Peking University Law School players answered accurately and orderly, which was unanimously appreciated by judges. With regard to the practice simulation part, Peking University team cooperated with Philippines University team in the competition, they exploited the knowledge of international humanitarian law flexibly, showing a wealth of experience in competition.

Photos provided by: the team
Article written by: Feng Weixian