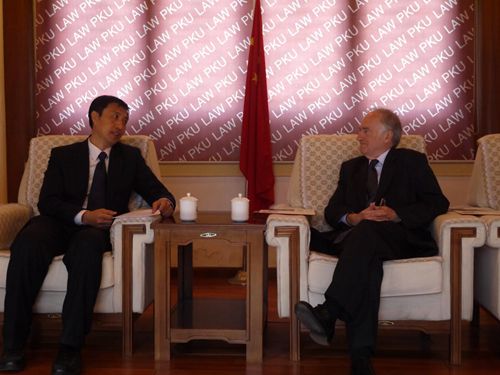 On behalf of the law school, Dean Zhang Shouwen extended a warm welcome to Mr. Blair’s visit and reviewed the scene of the first visit to Peking University Law School by Justice Blair in May 2016. Judge Blair and the teachers and the students of the School of Law had a cordial and friendly chat. Judge Blair is a famous legal scholar, has a profound knowledge in the field of theoretical research in commercial law and financial law, and also has a wealth of practical experience in the judiciary. Peking University Law School sincerely invited Blair to be a visiting professor of our school. We believe that Mr. Blair’s joining will play a vital role in the discipline construction, legal research and personnel training of law schools and will greatly promote closer and in-depth cooperation between Peking University Law School and the British academic and professional institutions.

Justice Blair thanked Dean Zhang Shouwen and Peking University Law School for his warm reception, and was very pleased to be able to visit Peking University Law School again. He had a deep memory of the previous visit to Peking University Law School, the students’ active thinking, accurate expression left him a deep impression. He is very honored to be a visiting professor at Peking University Law School,and he will work hard with the teachers and students of the law school to carry out relevant academic activities and promote the construction and development of disciplines. Justice Blair also briefed the current situation of cooperation between the High Court of England and Wales and the Supreme People’s Court of China. Following last May, the delegation of the Supreme Court of the United Kingdom, Liao Baijia, visited China, and after the visit Vice President He Rong of China's Supreme People's Court led a delegation to visit Britain. The Chinese and British sides promoted the establishment of the Judicial Expert Working Group. Justice Blair and Justice North have not only pursued the first meeting of the Chinese and English Judges' Expert Working Group, but also hope to take this opportunity to further explore how to strengthen the research and cooperation of the Supreme Court in the field of commercial justice. 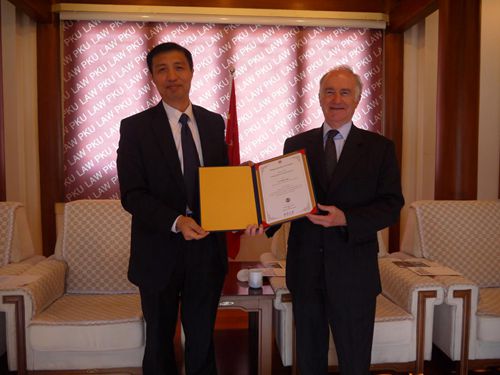 Attached by brief introduction of Sir Blair,Judge of the High Court of England and Wales:

Sir William Blair graduated from Oxford University, where he studied banking law and financial law and represented many domestic and international disputes and cases and provided counseling services.

Justice Blair became Queen's Counsel in 1994 and served as Chairman of the Commercial Bar Association from 2003 to 2005.In 2008, he was appointed judge of the High Court of England and Wales.Currently he served as president of the commercial court.

Prior to March 2011, Blair served as Chairman of the Qatar Financial Center Superintendent's Office and became Chairman of the EMEA Appeals Board in 2012. He is a former member of the Council of Comparative Law and International Law Institute and a member of the London Financial Markets Law Committee and Chairman of the International Law Association's Currency Law Committee (MOCOM-ILA). This organization brings together financial law and leaders in the legal and ethical areas of financial engineering, an informal group that focuses on financial industry standards.

Justice Blair visited Peking University Law School on May 26, 2016, and had friendly exchanges with teachers and students on legal education, practice and cooperation.