On November 25, 2016, the students of "China Law" and "Yanjing School" visited the Intellectual Property Court of Beijing under the leadership of Prof. Guo Li and Mr. Wei Xining.

In the background of the second trial of Beijing intellectual property court, this trial involved Internet information company trademark infringement and other intellectual property legal issues. After the court clerk verified the identity of the parties and read out the rules of the court, Judge Zhang Xiaoxia announced the hearing. The parties took turns to show their proofs for their own arguments. During the trial, because that the two sides of the litigation agent were not lawyers but the company staff, Judge Zhang Xiaoxia tried to guide the parties to focus on the core legal disputes - trademark infringement problem. Finally, the parties made a statement on the legal dispute. The judge then asked whether the parties were willing to accept the mediation, the appellant agreed and given the conditions for mediation, the appellee's agent would give a reply after discussing with the appellee. At this point the judge announced the adjournment. After the trial, Judge Zhang had a warm talk with the teachers and students. Some students questioned the identity of the non-lawyer, and wonder whether it wouldl have a substantial impact on the interests of the parties. Judge Zhang gave the answer, she pointed out that there was no compulsory law in China's litigation that stipulates lawyers as litigation agents, so judges were supposed to play a certain initiative in the trial to explore the main points of legal disputes. Whether lawyers or not will not affect the substantive interests of the parties; some students have raised questions on the mediation system, Judge Zhang had given a detailed explanation, she said that the mediation system was the characteristics of the Chinese judicial system, mediation played an important role on saving Judicial costs and maximizing the social benefits. Subsequently, the students also talked with the judges for further exchanges on trial procedures, legal disputes and other issues. 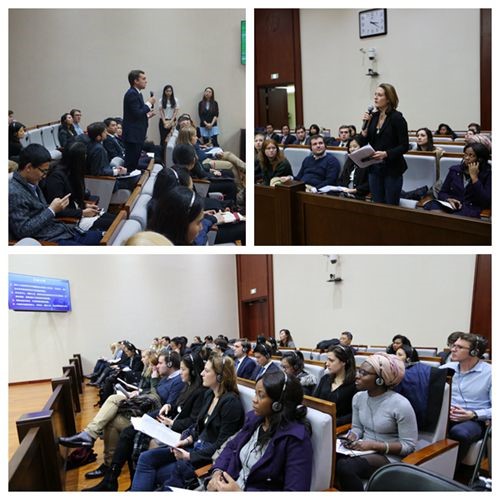 Judge Zhang Xiaoxia finally thanked the faculty and students of law school for their arrival and expressed their willingness to listen to the views and opinions on all aspects of the trial so as to enhance their operational capacity and ensure that the case was fair, just and open. Mr. Guo Li, on behalf of the Law school, thanked the Beijing Intellectual Property Court for arranging this event for the students. This helped greatly to enhance the students' understanding of China's judicial procedures and the judicial system. Finally, teachers and students of the project together with the judges posed for pictures. The auditing activities came to an end.