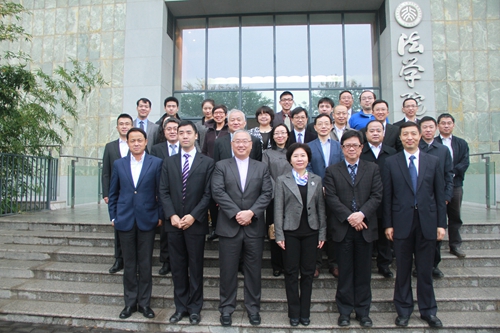 The coference was divided into four parts with the theme of "interdisciplinary law and diversified law".
At the 9’clock in the morning ,deputy dean Xv Jun held the opening ceremony. Firstly, Vice President Li Yansong delivered a welcoming speech and briefly introduced the long history of cooperation between two universities. Then Dean Zhang Shouwen gave a speech expressing the appreciation for HongKong scholars and the treasure to the past cooperation of two universities, and put forward the idea of further cooperation. Subsequently, Dean He Yaoming delivered a speech showing HKU Law School would regard Peking University as an important cooperation partner. After the attendees took the photos, theme report began to start.

The first session was held by Vice Dean Fu Hualing. First of all, Prof.Yu Guanghua taking the derivative litigation system in China as example, deeply discussed the influence of China's traditional path on system transplantation. Subsequently, A.P.Hou Meng put forward a unique view of social science at three levels,from the overall perspective with “social science of knowledge differentiation and integration” on theme. Then, Prof.Qiao Rentong explained the causes and solutions “xenophobic city” formation , and made a detailed analysis on the origin of land planning problem and the conflict between owners and elite decision makers. Prof.Deng Feng, Prof.Yu Guanghua and Dr.Yan Tian made comments on the speeches of the three speakers and gave a deep thought.

The second session was held by Vice Dean Guo Li. Firstly of all, Dr.Chen Jian lin , taking the religious charity as an example, made an analysis of the implement of “Charity Law” by using the legal economics knowledge. Subsequently, A.P.Tang Ying mao from the concept of panda debt leads to dispute settlement mechanism and the provisions of international law. Then, Dr. Li Honghui made a report on the "crowdsourcing" and made relevant legislative proposals in the light of the laws of various countries.Finally, Dr. Huang Suling explored the similarities and differences between jurisdictional and legal choices in cross-border insolvency between mainland China and Hong Kong. A.P.Jin Jinping, A.P.Zhang Zhiyong, A.P.Peng Bing and A.P. Xu Defeng also made corresponding comments and put forward their own views.

The third session was held by Prof. Zhao Yun. First of all, Prof.Bai Jianjun, according to the Chinese people's criminal law preference investigation analysis, emphasizedthat the criminal law should rationally deal with public opinion. Subsequently, Dr. Gao Minkeng used the method of comparative legal history to draw the conclusion that legal personality was gradually formed in the development of modern society. Afterwards, Prof.Chen Yongsheng expounded the status of China's injustice difficult to correct, and analyzed the reason why injustice was difficult to be corrected. Finally, Dr. Ye Bao ren proposed several different intensity of the judicial review models, specifically described their use in different regions. Prof. Fu Hualing, Prof. Xu Aiguo, A. P. Jiang shuo and A.P. Gan Chaoying elaborated their ideas and suggestions on the speeches of the four speakers.

The fourth session was held by Vice President Xue Jun. Firstly, Prof. Gu Weiya analyzed the "foreign-related factors" in China's foreign-related cases, and introduced the three criteria of "foreign-related factors" and the future development direction. Subsequently, A.P. Gao Wei, made a speech on the network behavior and the role of citizens in the network platform. Finally, Prof. Chen Yifeng analyzed the important role of the World Bank in global management through an example. Prof. Gao Wei, Prof. Zhao Yun and Dr. Qiao Shitong respectively commented and elaborated their views and suggestions.

At 5:00 pm, the closing ceremony was held smoothly with Vice President Fu Hualing giving the closing speech. He once again reviewed the history of the exchange between Peking University Law School and the University of Hong Kong Law School for more than 20 years. He hoped that the friendship between the two sides would last forever. At the same time, he also said that with the increasingly frequent exchanges between the two schools, he wished two sides can conduct a deeper level of cooperation.

In this PKU-HKU Law Annual Conference, professors and scholars from the two law schools conducted a comprehensive and multi-faceted discussion on the theme of "interdisciplinary law and pluralistic law", and obtained many meaningful conclusions. The conference not only enhanced the friendship between the PKU Law School and the Law School of HKU, but also set up a platform for academic exchanges between law schools and had positive significance in advancing the development and progress of relevant legal theories.