You are here： Home» News» Global» Stories of Law School: Carving down the Road – Story of " 77 Footprint"

Stories of Law School: Carving down the Road – Story of " 77 Footprint"

Peking University Law School began in 1904, the earliest one of theChina Modern Legal Education. Many stories happened in the passing century and all the flowers and trees here have seen the development of the school. A series of "Stories of Law School", describing the institute buildings, courtyard, sculptures and other typical scenery, will be showed here and you can see the Law palace with classic stories and cultural heritagealong the way.

In 1977, the fates of many Chinese students arechanged. The State Council approved the document of the Ministry of Education - "Opinions on College Enrollment Work in 1977", leading to the official resumption of college entrance examination system. According to statistics, the number of candidates that year reached 5.7 million, 270,000 of them were enrolled.

This year, 83 students were admitted to Law Department of Peking Universitythrough public examination, from 17 to 30 years old.

Today, more than thirty years flashed by, the students enrolling in 1977 have graduated for many years.They work in different places and become the excellent people in their field. But no matter how far they are, they will never forget the law school, the place of the "fate turning point".

"I have an idea, in a corner of the campus, we leave a few footprints, called '77 footprint', and we also write the words: 'go a long way to come here, and then go a long the way up to today, we regroup here and sound the hornto tomorrow '. "

In May 2008, alumni of 1977 came back to the law school and had a great celebration for the thirtieth graduation anniversary. Elected by the students, seven alumni left the copies of their footprintsin the west of Koguan Building, they are the oldest and the youngest in the class, the one studying abroad, the class leader, the proponent of "77 footprint" plan, the promoter and the implementer of this plan, as well as the president of class fraternity.

"We want to tell the young students of Peking University that the history is driven forward from generation to generation." 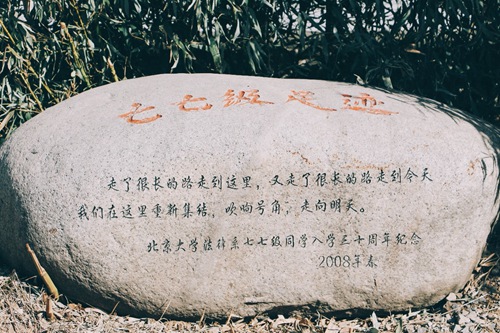 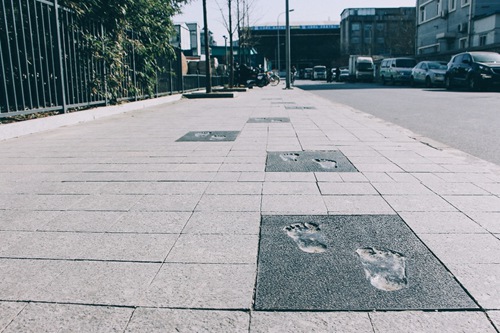 Seven pairs of footprints arranged in turn. They symbolizethe review of history. As the first beneficiaries of college entrance examination system after reform and open policy, they witnessed the changing time and devoted themselves to the socialist construction.

Seven pairs of footprints arranged in turn. They symbolize the wish of future. In this great era, people respect for freedom, pluralism and individual rights, "we hope that the students of Peking University students consider more things out of self-interest."

Now, new students come to the law school every year, walking on the road with the footprints. Filled with youthful enthusiasm and fearless, students of law school approach the shoulder of the former people and look out that unknown stars. Whenthe life in campus crowds in the brain, students and graduates all remember the law belief deep in heart. These seven pairs of footprints will not be forgotten, the words of the 1977 seniors will often be around the ear. Every student of law school should have a clear conscience: "when facing the affairs of the others, the groups, the nation and the country, I never keep out them." 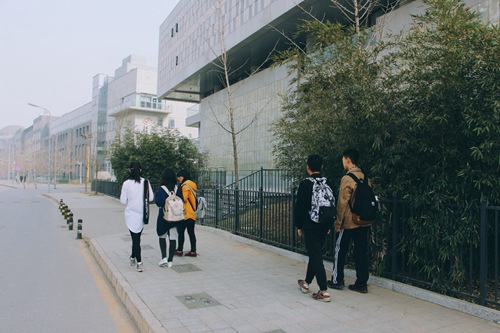