In November 2, 2015, Professor James Devenney, Head of Exeter Law School, was invited to visit PKULS and gave an academic report named “Challenges for the Harmonisation of Transnational Commercial Law: the Proposed Common European Sales Law as a Case Study”. Professor Chen Xin from China Youth University of Political Studiesand Professor Li Honghai, Professor Xu Defeng and other scholarsproposed their own opinions, and dozens of law school students participated in the discussion. Thislecture was presided over by teacher Chen Ruoying. 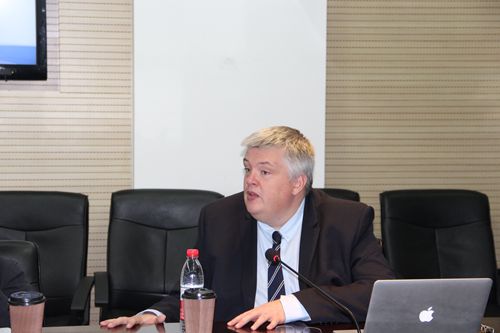 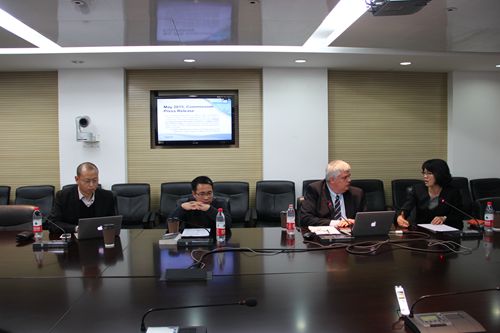 In October 2011,Professor James DevenneyjoinedExeter Law School. Professor Devenneyhas provided assistance to the Law Commission on Consumer Law, misrepresentation and unfair commercial practices; and more recently was invited to discuss the proposal for the codification of Australian Contract Law with the Australian Attorney-General’s Department, and to discuss another harmonisation project with the Singapore Ministry of Law. His work has been cited by the High Court of Singapore, the High Court of England and Wales and the English Law Commission.

In this lecture, Professor James Devenneyshowed us the theory and practice Challenges faced in the process of the Harmonisation of Transnational Commercial Law around the theme of “Challenges for the Harmonisation of Transnational Commercial Law: the Proposed Common European Sales Law as a Case Study”. He first introduced the background of Common European Sales Law is the negative impact that the EU member states to contract law differences on the EU internal market produce ,these effects include but are not limited to additional transaction costs, legal uncertainty, consumers distrust the internal market. In order to deal withthese negative effects professor Devenneythink that the EU attempting many aspects of the tendency of debris, some scholars believe that these attempts can promote coordination instruction to reach the lowest among member countries, but the same, other scholars believe that the EU should be strengthened in this area , which may be taken, including instructions to coordinate the transition from the highest minimum coordination directive, but this practice also exists in various problems. Then, he took the purposes of  "Principles, Definitions and Model Rules of European Private Law Draft Common Frame of Reference " as a starting point, which is significant for the process of European unification of private law in recent years, and then propose a more viable option that build a structure which allows member states to choose the legal framework, enables the EU member states can reach consensus easier on the Harmonisation of Transnational Commercial Law, and promote the process and  development of  the Harmonisation of Transnational Commercial Law in the EU.

The teachers and students comment or ask questions on about the above subjectfrom time to time, and positive interaction with professor Devenney.Whether the EU should continue to strengthen cross-border intervention in the Harmonisation of Transnational Commercial Law, how to provide appropriate relief to consumers under theHarmonisation of Transnational Commercial Law are also fully discussed. Through more than two hours discussion in English, students has benefited very much from the unique perspective and the novel method of these studies. 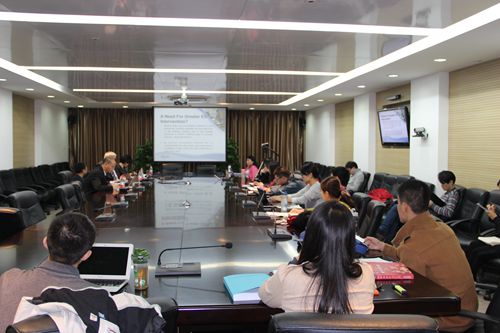 In the afternoon, Peking University Law school Dean Zhang Shouwen met with Professor James Devenney,talked in a cordial and friendly atmosphere, exchanged views and reached a certain consensus about international cooperation between the two sides, including the exchange of visiting scholars, students and other matters . Then, accompanied by Professor Zhang Shouwen, Professor Devenney visited the law library and expressed praise. 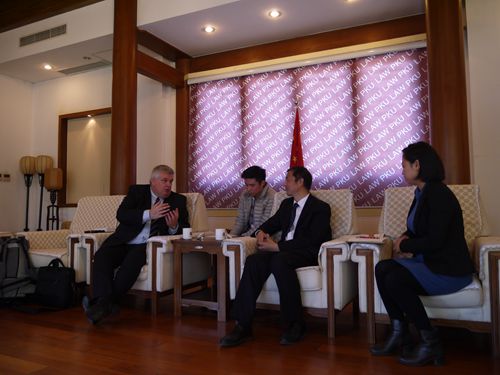