During Oct 7th to Oct 11th,2015, the 4th Chinese and American Forum on Legal Information and Law Libraries (CAFLL) was held at Honolulu, America.The forum was jointly held by the CAFLL and WESTPAC.Over one hundred expertshave participated in the forum, among which 80 experts are from the American side and 18 experts are from the Chinese side.Chen Zhihong, Director of PKU law school library, was invited to participate in the forum.The theme of the forum was “Challenge, Capability and Opportunity”. The Chinese and American representatives ignited a deep discussion about legal education, legal classification, legal research and so on. Taking “The Thought and Action of Chinese Legal Librarians” as the topic, Chen Zhihong gave a speech. 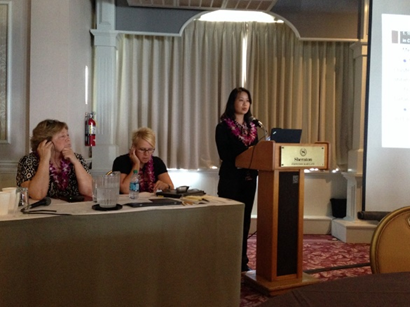 The forum was held successfully, promoting the legal information communication and law librarianship between China and America. CAFLL is a non-profit organization, which aims to strengthen the communication and cooperation in the law librarianship and legal information field between two nations. According to the “Xiangshan Declaration”,CAFLL was held in turns at China and America every two years.The Executive Committee of 4thCAFLL announced that the fifth CAFLL forum will be held at Hangzhou,China on May,2017.

Translated by: He Xin
Edited by: Deng Bowen