First of all, He Quansheng introduced the leadership and teachers,and reported the progress of preparations work for thisCommemoration After that,all the participantsintroduced themselves.

Subsequently, all the professors in the scene talk in turn.  As a class 1965 class teacher, Professor Wei Zhenying first welcomed the students back to school. He said that the 1965 level of the students experienced a special historical period, accumulated more experience in life, but also made a contribution to the development of the country's legal, the results are worthy of recognition. At the same time, he expressed the hope that the students often return to his alma mater, as well as the development of contemporary legal science.

After, the teacher Dang Shuping detailed introduce the alumni development status and the association's work plan, and introduce that the alumni association is to carry out the national alumni will preparatory work, call each school friends actively participate in donation, assist Alumni Association Work, make Peking University Spirit from generation to generation continues.

Subsequently, the 1965 class Tian Pingan speak on behalf of the alumni. He first expressed gratitude for the teacher's teaching and school training, hope that the students will be able to contact, not to forget the identity of Peking University Law Person, and the teachers live longer, Law School can have better development.1965 Alumni donated a marble table engraved with the names of alumni to the Law School.Finally, to attend the ceremony of leadership, teachers, and the alumni in Law School took a group photo in the courtyard.

At this memorial, the alumni review the history and look forward to the future, to encourage themselves and the cause of law to continue to move forward. The alumni association not only build a platform for the exchange of communication, but also show the contribution that Law School has done for half a century for the development of China's legal system and personnel training.Fifty years of change, recorded a generation of people's growth, recorded the Law School’s development by which the Law School follow the times step by step. Through the exchange of the Alumni Association, we can believe that Law School willhave more positive long-term development in the future. 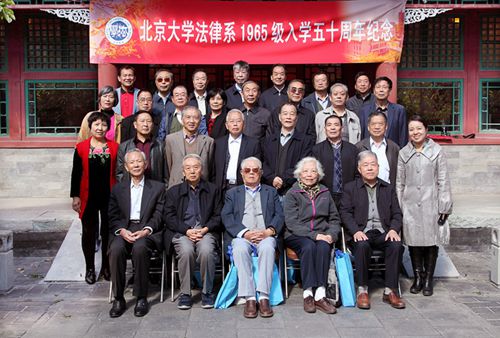