On October 16th, 2015, under the guidance of Ms. Wei from the Law School of Peking University, the students of LL.M. Program visited the Palace Museum and got to know the history and traditional culture in ancient China.

The students entered into the Museum through Meiridian Gate and walked along the central axis. Along this axis, there are Taihe Palace, Zhonghe Palace and Baohe Palace. Under the guidance of explanation, students learned the basic structure of Chinese buildings and the history of the Palace Museum. In front of Taihe Palace, students were interested in how Chinese emperors and officials did their daily work and where was the place for young emperors to learn knowledge with their teachers.
Later, all the students visited the Six Eastern Palaces and Six Western Palaces, among which there are famous palaces such as Palace of Heavenly Purity and Palace of Benevolent Peace. They got to know how emperors and queens lived in imperial China. Some of these palaces have become art galleries of porcelain and Chinese Bronzes. Students were amazed at the pottery figures, especially the tri-colored glazed pottery of the Tang Dynasty. 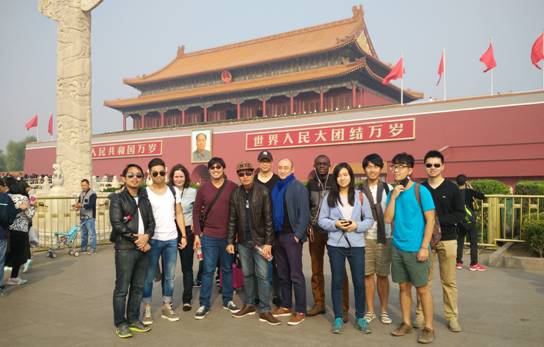 Before the end of the event, the students gathered together and talked about their feelings and ideas. The students thought highly of the experience and looked forward to another one. They treasured this experience which provided them an opportunity to come close to traditional China vividly.