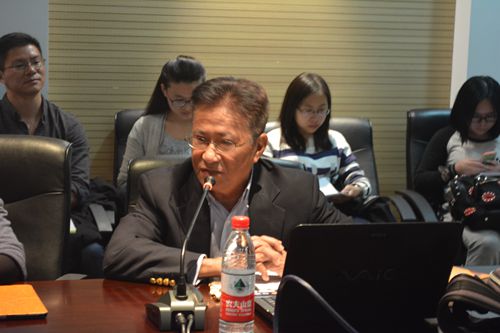 Professor Huang Weixing is grandson of Mr. Yan Fu, who was the old headmaster of Peking University. Therefore, before the lecture, Professor Huang said he felt honored to give the speech in Peking University, which made him feel like home. At the beginning of the lecture, Mr. Huang made a point that the purpose of the lecture is to communicate. Besides, about traditional method of legal interpretation, Mr. Huang pointed out that these methods were influenced by the point of natural science, yet were challenged by recent philosophy. Therefore, the lecture was themed reflection on traditional method of legal interpretation.

According to Mr. Huang’s rich judicial experience, the reason why the above-mentioned discussions existed was that, judges just couldn’t get away with subjective cognition factors. Though it didn’t mean that judges twisted the law, we still need to face the problem and fix it.

After the theme speech, Mr. Huang developed an interesting communication with the audience at present. Questions like “Where is the boundary between legislation and judicature?” “Are comprehension and explanation absolutely the same thing?” were asked by Mr. Huang.