“ICC Moot Court Competition” is a competition among universities held by International Criminal Court And local organizers of countries. So far, the competition has held Successfully by using English, Spanish, Russion and Chinese. The competition by using Chinese is “ICC Chinese Competition” .  It aims at bringing the most front concepts, theories of law and cases into China , and promoting the development of Chinese thoughts,ideas and traditions as well. 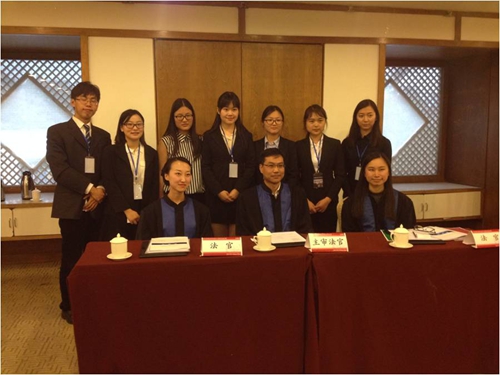 The advisor of Peking University Team in this competition is law school teacher Yi Ping and the captain is Shen Jie who is grade 2014 LLM. Other members are Tang Wanyi, Duan Wen, Zhang Hengzi,Xu Jie,Wu Lili and Shen Hai. There are first-class teaching and research and good tradtion of taking active part in international competition ,this is the reason why Peking University Team did great job in this competition. With the support of Law school and Youth League Committee, the team had prepared for 5 months since 2014. During this period , they actively listened to international criminal law scholar’s suggestions and learn plenty of knowledge about the theories of international law .

In this competition , Shen Jie, Zhang Hengzi and Shen Hai are government’s attorney , prosecution and aggrieved person’s attorney. There are many universities participating in this competition including Beijing Foreign Studies University, Tsinghua University, Beijing Normal University and University of International Relations. Finally, Peking University Team won the first place in semi-finals by their outstanding performance and get the chance to go to ICC The Hague to participate in the finals in June.