On Dec.5th, 2014, under the guidance of Ms. Zhao Xue, LL.M Program Students and Law School exchange students observed a civil trial on the disputes of medical damage liability in the people's court of BeiJing Chaoyang District, and had a discussion with the judges after the trial. Jin Xiaowen, a doctoral candidate in PKU Law School interpreted. 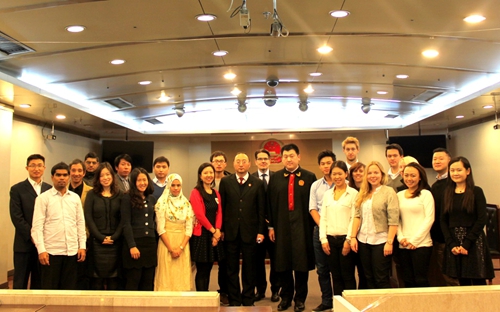 The case was accepted by the first civil tribunal of Chaoyang District People's Court, and Judge Wang heard the case solely under summary procedure. That is the third session in the hearing of the case, under the auspices of Judge Wang, both parties adduced evidence, cross-examined evidence and debated in the court. In the proceedings, the litigious rights of both parties were respected and guaranteed, while the entire trial process was efficient and in good order, it demonstrated the judge’s skillful ability to control the trial.
After the trial, the students had a discussion with Judge Chen (the chief judge of first civil tribunal), and Judge Wang. Judge Wang introduced the first two sessions of the case, and introduced the general thoughts of the trial of such cases. Subsequently, the students asked questions on attendance of witnesses, the time limitation of evidence submitted, the admissibility of expert opinion, mediation application, the progress of judicial reforming and the reasons of their choice to be a judge, etc. The two judges answered those questions. After answering students’ questions, Judge Chen showed great interest in the reasons of foreign students choose to study Chinese law, several students also talked about their ideas.
After the discussion, on behalf of Peking University Law School, Ms. Zhao Xue presented souvenirs to the court, and then all the attendants took photos together. This activity showed the actual function and operation in China's civil trial to the students, and stimulated their interest in learning Chinese law.
LL.M. Program Office