The Halloween party was successfully held on October 31, 2014 at Kaiyuan Building of Peking University.
In order to provide a communication platform for local and international students and to promote Sino-western cultural exchange, the Graduate Student Union of the Law School decided to organize the Halloween Party, a well-known event among the western countries. Ms. Xue Zhao, the course coordinator of the LLM Program and Mr. Zeqiang Wang (the vice president of the Law School Graduate Student Union) both attended the event.

After the host Yifan Qing gave a brief introduction of the origins of Halloween which majority of local students were unfamiliar with, the participants were divided into different teams in playing ice-breaking games such as beer pong, jenga and etc. The cultural exchange section of the event really allowed the students to get to know each other and to have a better understanding of foreign or western cultures, and the event ended up with lottery drawing. 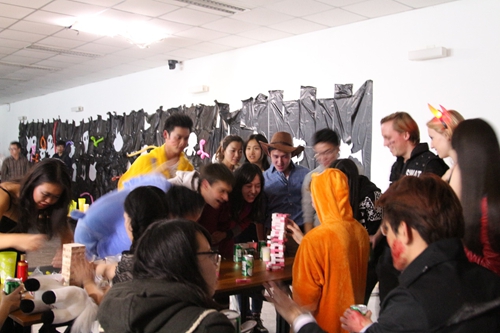 The event received overwhelming response and attracted international/local students, teachers and visiting scholars from the Law School as well as other Peking University students. The Party was supported by Peking University LLM Program and Foreign Affairs Office.