On October 6, 2021, Prof. Adrian Vermeule, Tenured Professor of Constitutional Law of Harvard Law School, Fellow of the American Academy of Arts and Sciences, and Board Member of the Administrative Conference of the United States, gave a lecture on the theme of “Rules, Orders and Principles in the Administrative State” for the “Global & Comparative Law” series of PKULS. The lecture was hosted by A.P. Chen Ruoying, and the referees were Prof. Shen Kui, A.P. Zhang Yongle, A.P. Dai Xin, Dr. Peng Chun, and A.P. Xie Danxia from Social Sciences School of THU. More than 500 persons participated in the lecture.

Adrian Vermeule: An administrative state is a state structure in which administrative adjudicatory bodies and administrative agencies, empowered by a supreme sovereign legislator, have the power to make binding rules, orders, and/or sanction violations of such rules or orders (with initial or final legal effect, whether or not subject to final review). By contrast, a legislative state is one in which a supreme sovereign legislator makes general rules, which are enforced by an administrative agency through court action, but which is not considered to have the power to make binding law on its own.

The question addressed in this lecture is: what will happen to the form of legal norms as the administrative state becomes more developed, widespread, and complex in response to an increasingly complex economic environment and a developing society? Will they change? If so, how will they change?

From this analysis, I have identified three views, which are advanced by three scholars: Roscoe Pound, Carl Schmitt, and Ronald Dworkin.

The first view is that the effect of the administrative state's increasing complexity is to transform legal norms from general rules into specific, occasional administrative orders – and that this change is good. This roughly reflects Pound's view.

The second view is that the effect of the administrative state's increasing complexity is to transform legal norms from general rules into specific, occasional administrative orders – and that this change is bad. This roughly reflects Schmitt's view.

This view, that legal principle is a triumph of Law in the administrative state, is roughly Dworkin's view. As he puts it, “elaborate statutory schemes of all kinds are increasingly important sources of law, but they are not (and cannot be) presented as statutes. Increasingly, they consist general principles and policy guidelines that shall be further explained in administrative actions and judicial decisions. When the supply of statutory law is insufficient to respond to technological change and commercial innovation, as it has been since World War II, judges and other legal practitioners must turn to more general strategies and principles of fairness to adapt and develop the law.”

Thus, Legal principles are legal norms with both application scope dimension and importance dimension. Legal principles are also different from rules: they have an additional dimension of importance. Whereas rules can only be obeyed, violated, or transcended by higher-level rules, legal principles may be transcended by other principles that conflict with one another, or by very clear and specific statutory orders. The primary role of principles is interpretive: they are used to interpret the text of statutory law that is abstract, vague, or ambiguous. When different legal principles conflict with each other, the principle of “specific field prevails” will be taken as the overriding basic norm to make a judgment: if the facts of a case are in line with the applicable scope of a certain principle, but barely in line with the applicable scope of another principle, the first principle shall be ajdsefpplied with priority.

This lecture further takes the example of the American administrative state to argue that it strongly supports Dworkin's claim. This lecture is closely related to my recent book with Cass Sunstein, Law and Leviathan. The main point of that book is that legitimacy in the administrative state has nothing to do with “democracy” or “freedom” or any of the other usual concepts. Rather, legitimacy has to do with the inherent morality of administrative law, a theory derived from Lon Fuller's work on the prerequisites and procedures for creating legitimacy.

Nowhere is the inherent morality of administrative law more apparent than in a set of principles that fall under Dworkin's pedigree. Courts use the principles either to interpret vague and general provisions of the Administrative Procedure Act, or to invoke them directly in the absence of any explicit statutory provision.

Finally, I would like to raise a question: to what extent is Dworkin's analysis and conclusions narrow? Does it apply only to American and European administrative law? Is China a counterexample? And if so, can we identify the conditions under which this analysis holds or does not hold?

After the lecture, Prof. Adrian Vermeule made further discussion with the audience around the theme. 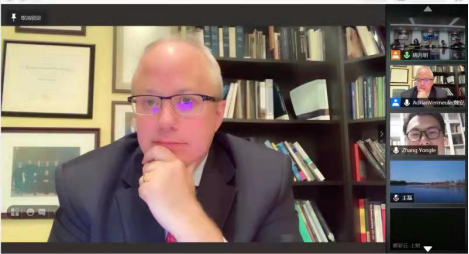 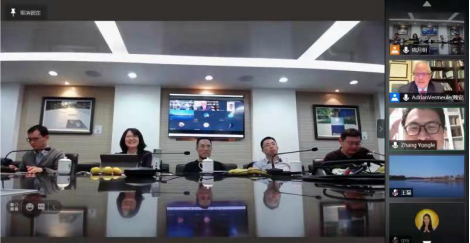