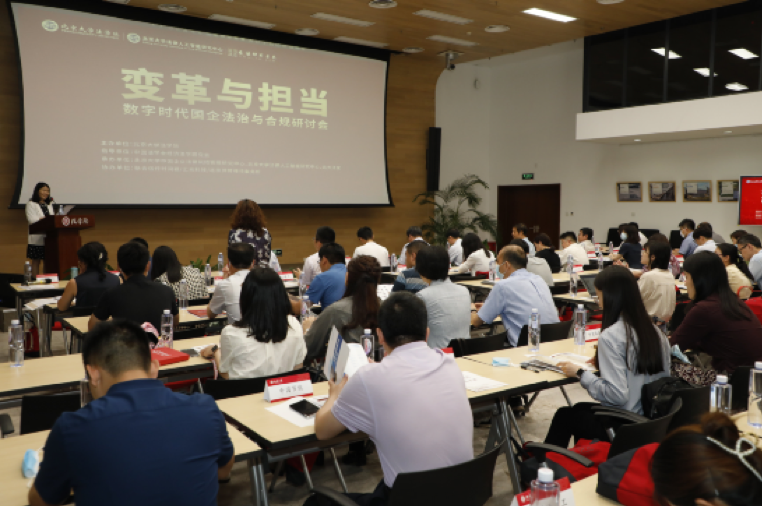 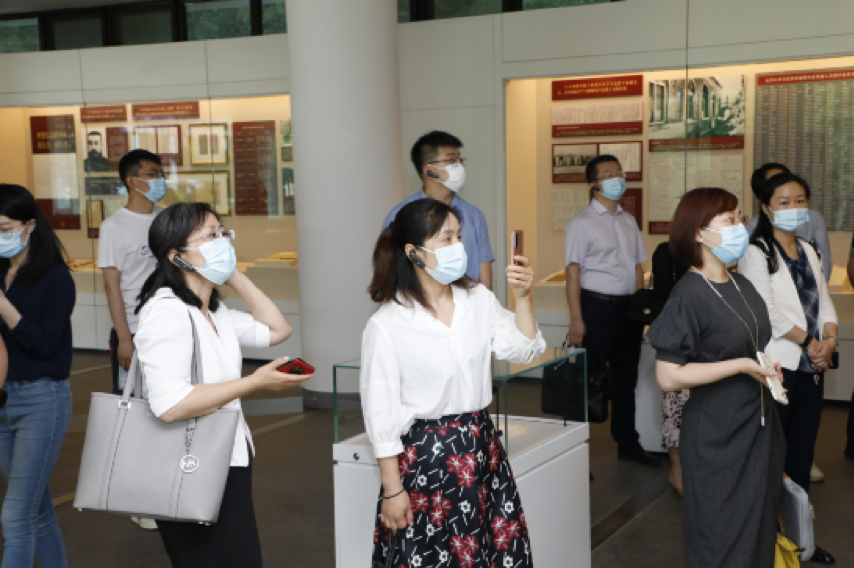 (Participants visited the exhibition "Faith Remains the Same: Peking University and the Founding of the Communist Party of China") 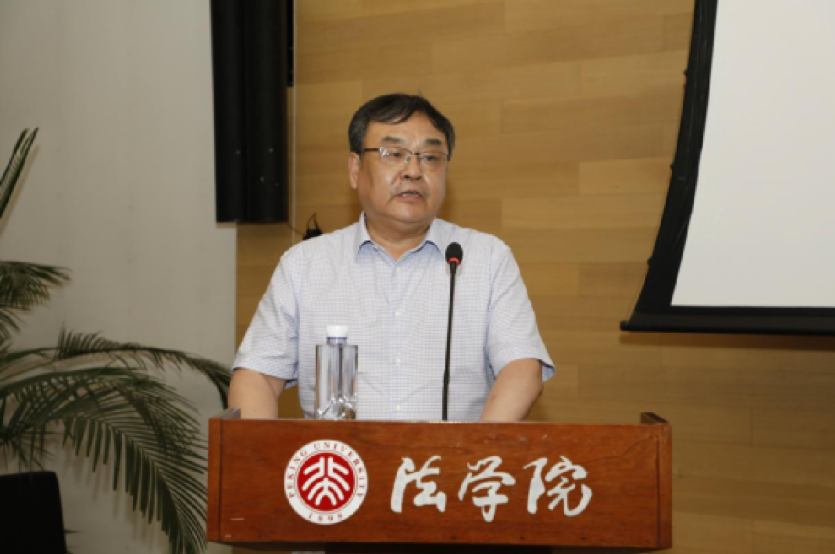 Subsequently, Lin Qingmiao, Director of the Bureau of Policies and Regulations of the State-owned Assets Supervision and Administration Commission of the State Council, delivered a speech. Focusing on the theme of this conference, Director Lin first pointed out that the digital transformation of economy and society has become the trend of the times. The Central Committee of CPC has emphasized in a series of important plans on the rule of law that the construction of China ruled by law should be based on data, network and intelligence. The digital transformation of state-owned enterprises is an important starting point to achieve high-quality development. Since the work of rule of law and regulations of most SOEs is still at the stage of informatization and there are widespread problems such as information island and data chimney, Director Lin emphasized that SOEs shall think deeply about new issues brought about by the digital era. It is necessary to actively explore and use a new generation of digital technology such as big data, block chain and artificial intelligence to fully explore the data in contract, disputes, cases, compliance, internal control and risks of enterprises, so that these data can be stored and activated, gradually achieve intelligent identification of legal and compliance risks and early warning, and continuously improve the pertinence and effectiveness of the work of rule of law and compliance of enterprises. Director Lin hoped that the persons in charge of legal and compliance affairs of SOEs should seek reform, shoulder their responsibilities bravely, firmly grasp the opportunity of digital and intelligent development, promote the work of rule of law of SOEs to a new level, provide stronger support for cultivation of world-class enterprises, and reflect the unique value creation by legal persons. 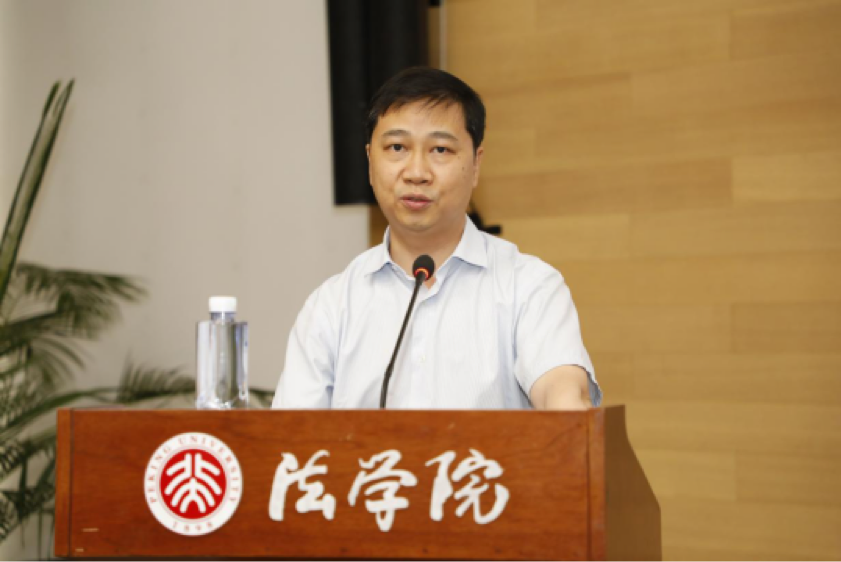 (Address by Lin Qingmiao, Director General of the Bureau of Policies and Regulations of SASAC of the State Council) 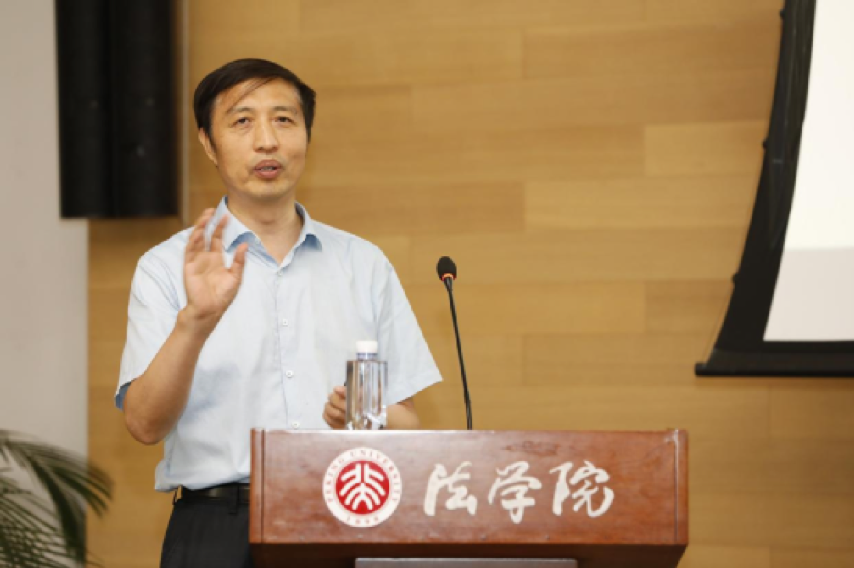 (Address by Professor Zhang Shouwen, Dean of the Institute of Rule of Law and Development of Peking University and President of the Economic Law Research Association of China)

Subsequently, a number of experts, scholars and practitioners made keynote speeches.

Professor Yi Jiming delivered a keynote speech titled "Strengthening IPR Protection and Building a New Pattern of Development". From the perspective of governance in the data age, especially the development trend of international laws and regulations in the data age and the game situation of international trade frictions in the data age, Professor Yi Jiming introduced in detail the intellectual property issues in the digital age and pointed out that strengthening IPR protection is the road to building a powerful country. SOEs should seize the window period to develop core technology, control the top of the industry chain, and promote integrated development of IPR and economy and society through independent IPR innovation. 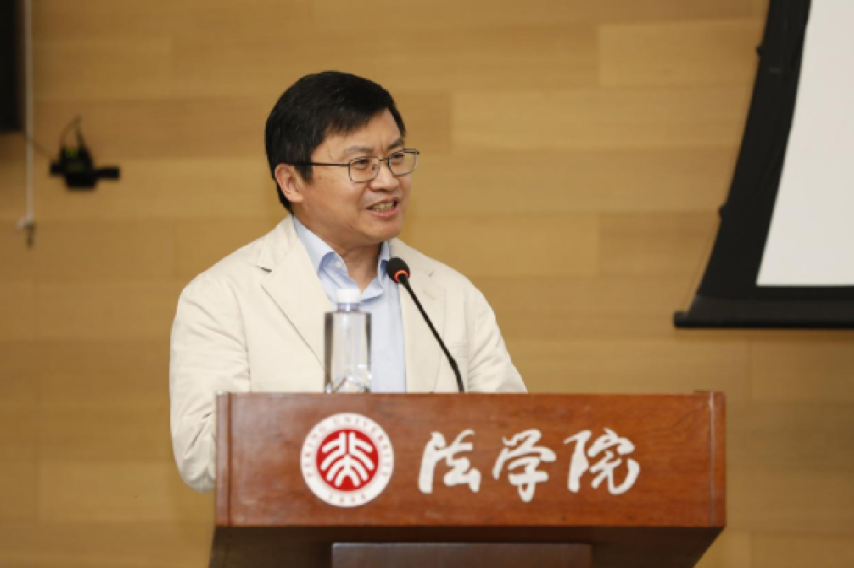 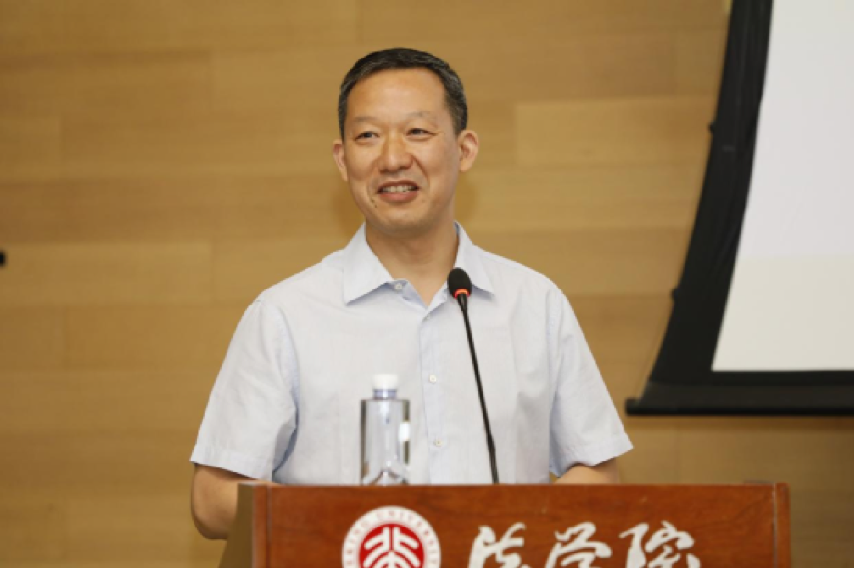 Professor Jiang Daxing delivered a keynote speech titled "Three Dilemmas of Compliance Management in SOEs". Professor Jiang Daxing pointed out that the compliance of the SOEs first face the comparison between written laws and compliance practice, so the compliance of the SOEs must adopt their own measures and carry them out in practice to make effective risk warning. The SOEs are also faced with the conflict between apparent compliance and substantive compliance. Therefore, in order to truly take the compliance of SOEs as a career rather than a decoration, the SOEs must combine the actual situation to realize the materialization, differentiation and balance of the rule of law and compliance. The SOEs are also faced with the differences between Chinese rules and foreign rules, in which both the state and the SOEs need to understand foreign rules and rationally explain themselves when using foreign rules. At the same time, it is necessary to understand and summarize the cultural characteristics of rule of law and compliance of the countries and the SOEs and proactively do a good job in cultural communication. 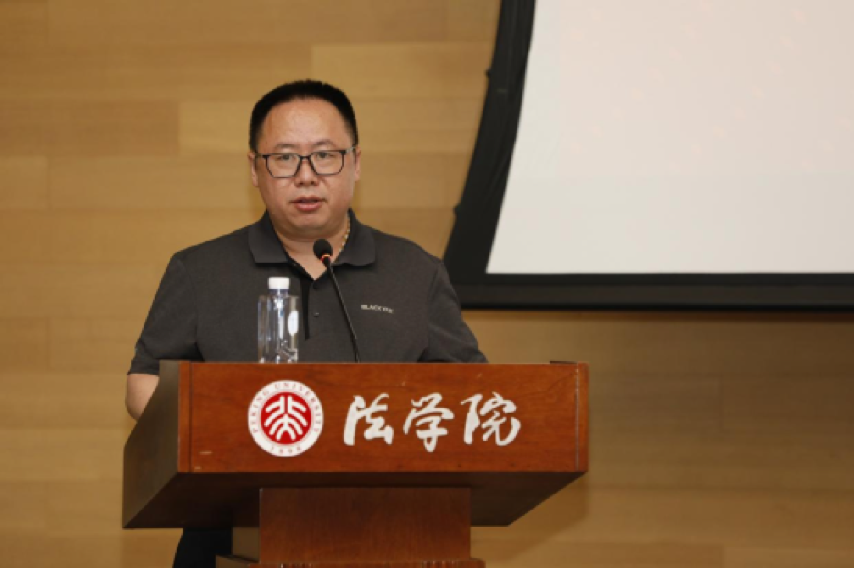 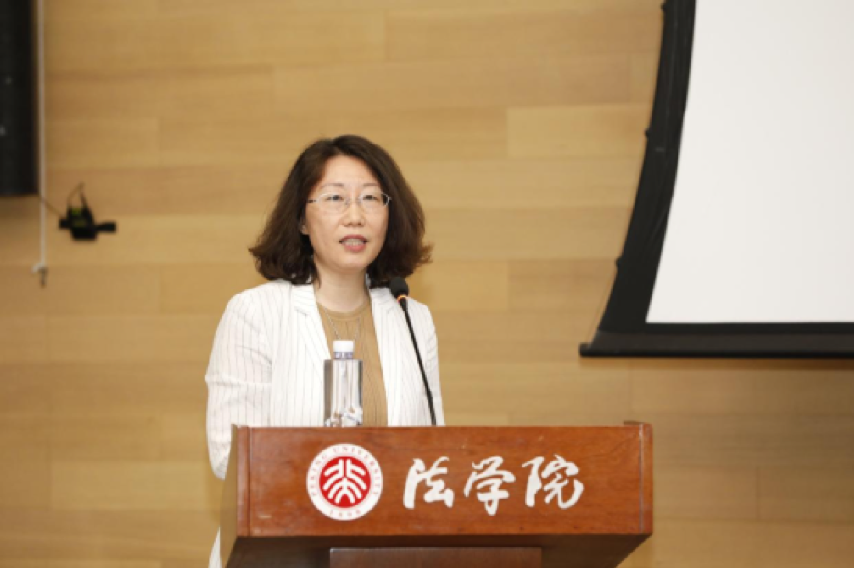 Ms. Zhang introduced the situation analysis and international experience with respect to corporate compliance, shared the compliance management system and practical experience in "Compliance Protection Plan" and "Improving Compliance Organization, Optimizing Compliance Management System, Standardizing Compliance Work Process, and Cultivating a Culture of Compliance" which are launched by China Mobile as one of the five pilot entities of the State-owned Assets Supervision and Administration Commission of the State Council to develop the compliance management system for centrally administered enterprises, and introduced in detail the research and development ideas, major achievements and application value of using AI technology to realize the digital transformation and upgrading of contract management. In light of the current situation and trend of digital transformation of state-owned enterprises, Director Qin Lixing analyzed the problems faced by the corporate rule of law in the digital era, and discussed the comprehensive integration of legal affairs, compliance, risk and internal control. Furthermore, he emphasized that integration of data knowledge is the foundation of the digital transformation of the corporate rule of law. Based on this, he introduced in detail the magic weapon of Peking University, including the externally integrated data such as massive laws and regulations, judicial cases, academic journals, corporate creditworthiness, and the internally integrated data such as internal risk lists, risk events, contract manuscripts, case disputes, control measures of enterprises, and various kinds of digital applications such as intelligent drafting, intelligent comparison, intelligent audit, intelligent early warning, intelligent relevance, intelligent push, intelligent knowledge atlas, and intelligent risk lens in the corporate rule of law and compliance. Subsequently, Liu Kaixiang, Vice-Chairman of China Commercial Law Research Association and Professor of Peking University Law School, chaired the Forum Dialogue on "New Potential and New Momentum of Corporate Rule of Law Planning during the 14th Five-Year Plan". Li Hui, Director of the Legal Management Department of China and Legal Department of China United Network Communications Limited, introduced the specific working methods of Unicom in introducing legal technology, and answered the questions on how communication enterprises complete the digital transformation and how to synchronize the digital transformation of the corporate rule of law and compliance, and how to use legal technology to create an intelligent legal center to empower the business development of enterprises. Director of the National Development Agency, International Business Division and Legal & Risk Management Department of POWERCHINA Group, provided his opinions on digital transformation of corporate legal affairs from the perspective of lean case management. Dong Xuemei, General Counsel of the Beijing Architectural Design Research Institute pointed out that, in the process of digitalizing and intelligentizing the "rule of law" and compliance of SOEs, legal officers of legal compliance departments of SOEs need to support the business, protect the risks, implement the measures, and guide the future. He Wenjun, deputy director of Strategy and Legal Department of Zhejiang Energy Group, discussed the key issues in the current compliance with examples. He pointed out that the current anti-monopoly reporting standards of enterprises in respect of anti-monopoly are far from Zhejiang's economic size, and different practices, which lead to uncertainty in transaction costs and transaction time. In this regard, he called for accelerating legislation process in order to solve the current problems as soon as possible. 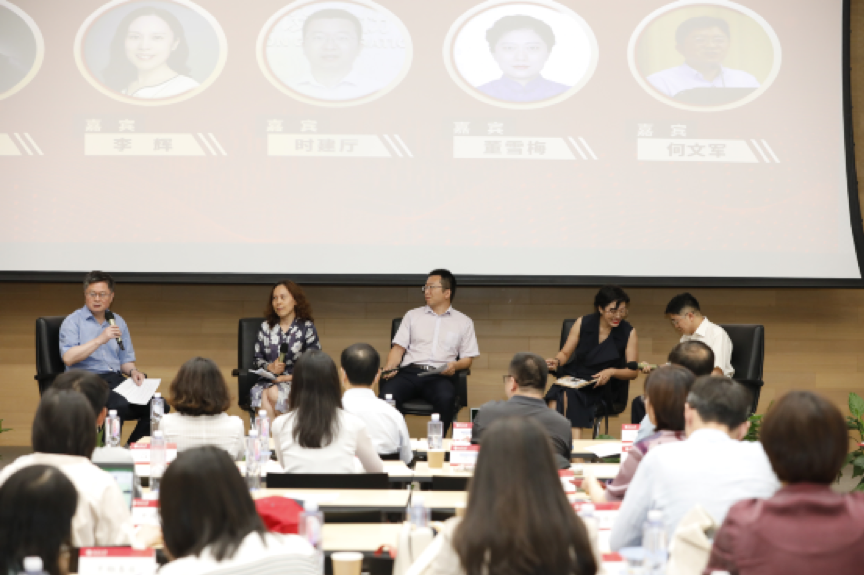 Finally, Zhao Xiaohai, General Manager of BEIDA YINGHUA CO., made a concluding speech. He expressed heartfelt thanks to Peking University Law School, the Bureau of Policies and Regulations of SASAC and all the legal officers and compliance officers of central government-owned enterprises and state-owned enterprises for their support. Based on the "Rule of Law System" proposed by Mr. Qian Xuesen and "Computerization of Legal Work" written by Premier Li Keqiang, he recounted the birth and the market-oriented development of the magic treasures of Peking University, introduced the enterprise genes and mission of the times of transformation of scientific research on magic treasures of Peking University and empowerment by science and technology, shared his understanding of the development trend and industry innovation of digital transformation and digital governance, and introduced the active exploration and iteration innovation on smart legal platform and capabilities of the magic treasures of Peking University. This Seminar vividly reflects that Peking University Law School has actively implemented Xi Jinping's thought on the rule of law and contributed to the overall strategy of rule of law. By focusing on digital governance and legal informatization, and strengthening the communication and dialogue between the theoretical and practical circles, the Seminar will help promote the effective implementation and high-quality development of the building of the rule of law in various fields of China.