From March 14 to 21, 2021, in the 18th Willem C. Vis (East) International Commercial Arbitration Mock Arbitration Tribunal, the Peking University team emerged from a total of 147 teams from 37 countries and regions around the world, won the Eric Bergsten Award for the Team That Prevails in Oral Arguments - Sixteenth Finals and the Fali Nariman Award for the Best Respondent Memorandum - Honorable Mention, the top 10% in the world, setting the best result achieved by Chinese institutions of higher learning in this year's competition. In the round robin tournament, the Peking University representative team ranked 8th in the world in terms of points, the best result of any Chinese university in the competition in recent years. This is the honor of Peking University after five years of being shortlisted in the Willem C. Vis (East) Simulated International Commercial Arbitration Tribunal Competition in 2015 and 2016.

In the competition, the Peking University debaters demonstrated their solid legal knowledge, logical thinking and excellent English debating skills, and won high praise from international renowned arbitration experts, including Professor Louis Flannery QC, a British barrister. In terms of the individual debaters award, a total of 456 people from 147 law schools around the world participated in the debate. Wang Fengquan, a 2018 undergraduate from Peking University Law School, was awarded the Best Oralists - Winner (Neil Kaplan Award for the Best Oralists - Winner , ranked joint first), and Chen Zhuowei, a 2020 LLM and Jiang Hewen, a 2020 LLM, were awarded the Neil Kaplan Award for the Best Oralists - Honorable Mention (the top 10%), ranking seventh and 13th in the world respectively. In terms of the number and quality of individual debaters' awards, the Peking University team not only set a new record in the history of the event, but also set a record for the Chinese mainland team in the Vis East Moot competition in the past seven years. 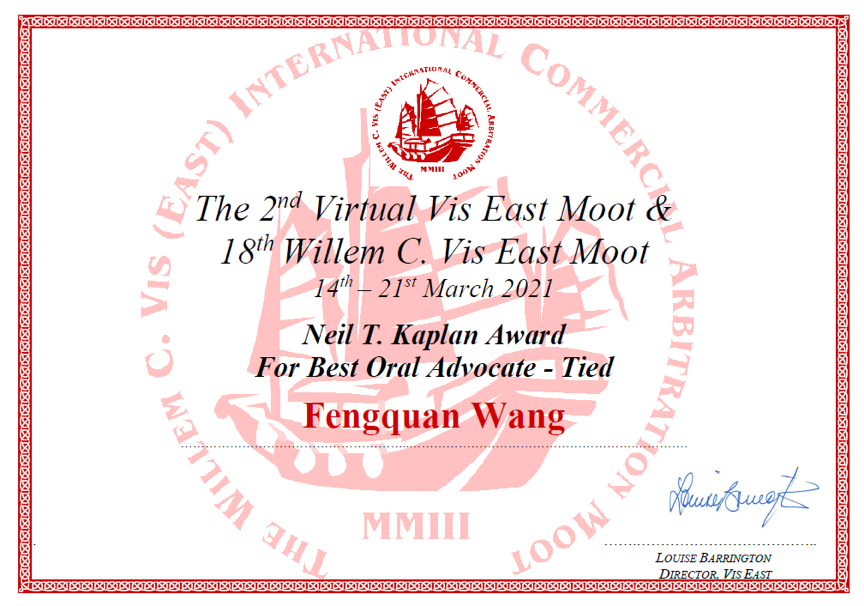 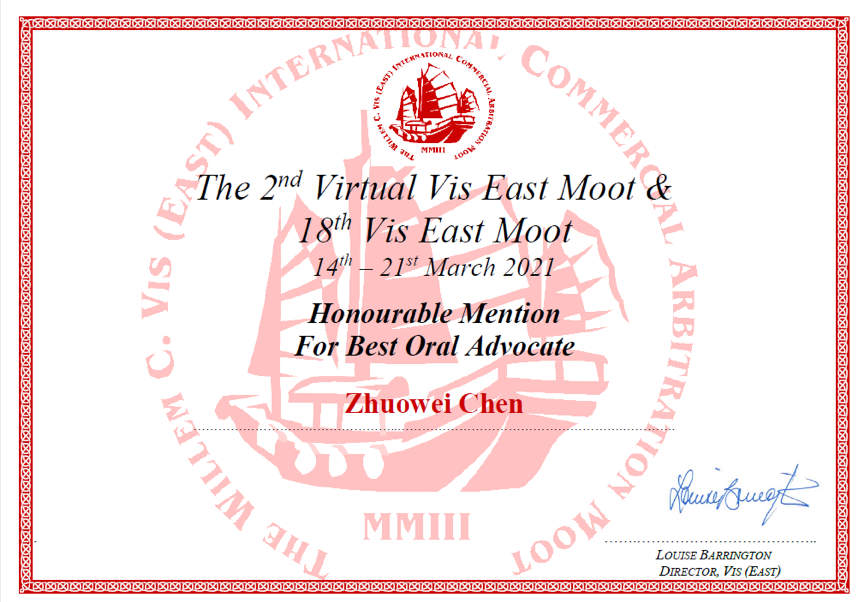 The Peking University team not only benefited from its first-class teaching and scientific research, but also from its tradition of emphasizing practical teaching, participating in international simulated arbitration competitions, and the training of foreign-related talents. Under the guidance of Associate Professor Gao Wei and the scientific training of Sun Haobang and other student coaches, all the members of Vis Moot team of Peking University have been working hard to overcome the technical difficulties and jet lag caused by online competitions. During the 6-month preparatory period, the author has made a thorough study on the complex and cutting-edge international commercial arbitration and international trade law issues, such as "third party joinder", "interpretation of online hearing and arbitration agreement", "applicability of hybrid contract and CISG" and "seller's intellectual property guarantee obligation under CISG", "seller's intellectual property guarantee obligation under CISG", etc. 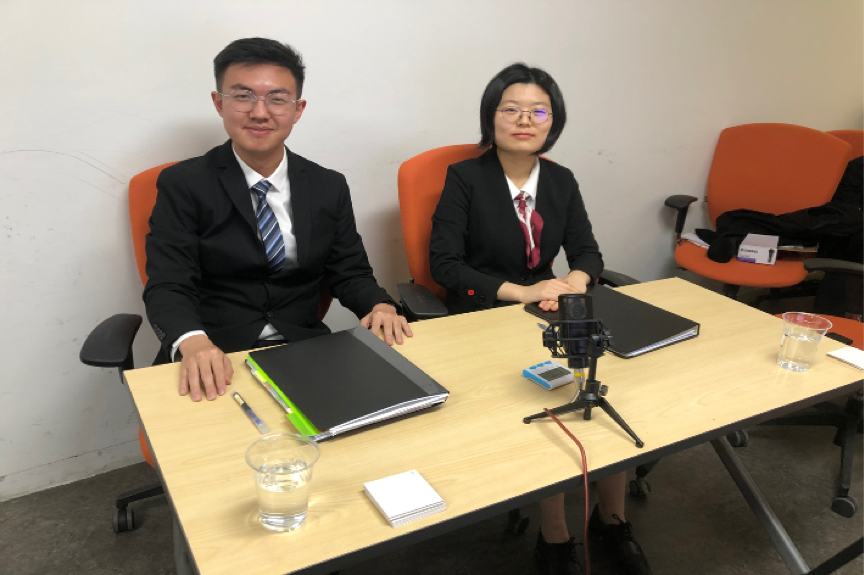