You are here： Home» News» Global» Professor Dr. Shizhou Wang was awarded the Certificate of Outstanding Contribution by the Alexander von Humboldt Stiftung/Foundation 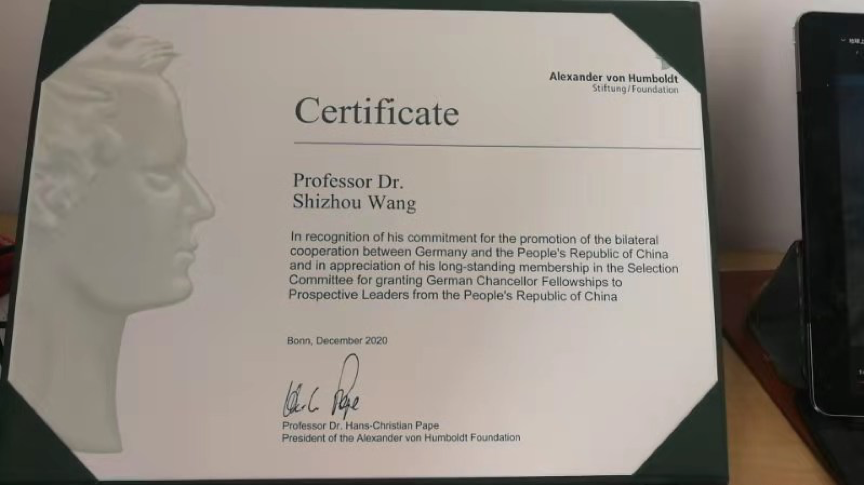 Funded by the Ministry of Foreign Affairs of Germany and managed by the Alexander von Humboldt Foundation, the Scholarship Program has been aiming at supporting young talents with an international perspective and initial leadership experience from the United States, Russia, China, Brazil, India and South Africa to explore new approaches to the problems of our era.

As a Humboldt Scholar and the winner of the Humboldt Research Prize, Professor Wang's personal works have been translated into eight languages to be promoted all over the world, including English, German and Korean. His academic research has been published in Europe, Asia, America and Latin America. Professor Wang has served as an international judge on the selection committees of the Humboldt Premier Scholarship and the Humboldt Environmental Protection Scholarship for more than ten years. During his tenure, he participated in the selection of scholarship applicants several times a year, making outstanding contributions to the talent selection of the Alexander von Humboldt Foundation.

At the same time, Professor Wang also serves as the Ambassador in China on behalf of Alexander von Humboldt Foundation. In China, in addition to actively promoting the subsidy spirit of the Humboldt Foundation, he also explains and introduces the application procedures and details of Humboldt Scholarships on various platforms, dedicating himself to helping and encouraging Chinese scholars to actively apply, so as to expand their academic foundation and step into the international academic arena.

Professor Shizhou Wang's recognition of this award not only recognizes his contribution to the development of bilateral academic cooperation between China and Germany, but also reflects the growing international academic influence of Peking University Law School.