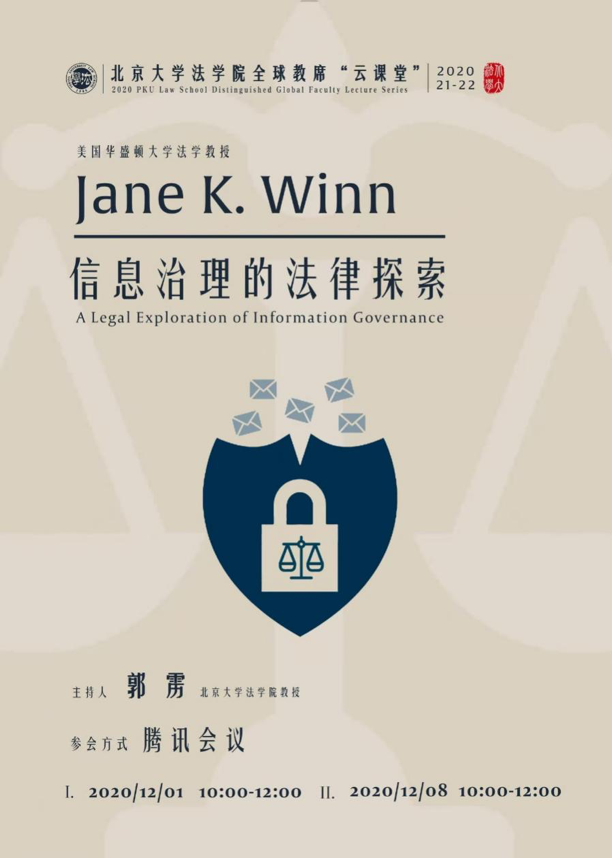 Professor Jane K. Winn's main research fields are comparative law and commercial law, focusing on the impact of globalization and innovation on the national legal system. She graduated from Queen Mary University of London and Harvard Law School, and is a member of the American Law Association. She has given guest lectures at the University of California, Berkeley, Peking University, Tsinghua University, Zhejiang University, Tsinghua University in Taiwan, the University of Hong Kong, Chulalongkorn University in Thailand, Indian University National School of Law, Paris Institute of Political Studies, Université Lyon 3, Monash University and The University of Melbourne Law School. Her books include the New Century Sale Law, the legal agreement of sale and contract, and so on. Professor Winn is currently studying how the US, UK, EU, China and India are using regulation to promote competition and innovation in payment systems, and the impact of the rise of knowledge management systems implemented by machines on the modern legal system.

This article presents the communication and dialogue between scholars in the form of transcripts.

Jane K. Winn: The World is going through Information revolution, where General Purpose Technology connects different things and industries to make social connections into tradable goods. The information revolution is essentially a revolution about people, not about technology, and it is the relationships between people that drive human society to progress, and the technological and ideological changes provide people with the tools to manage those relationships. Innovation is rooted in human history, and it happens when people begin to see the world in new ways. Countries, like people, have different cultural characters, so there are differences in the way they look at the world, which in turn maintain and shape the character of a country and influence its development. From a cultural perspective, the understanding of Information revolution and information governance varies greatly from country to country.

In the process of modernization, Legal Pluralism has been gradually replaced by the Rule of Law. The modern country replaces the traditional customary law with the unified law in order to achieve the goal of social governance. However, the advantages of a unified rule of law over legal pluralism are not permanent. In the process of globalization, countries can compete with each other through the rule of law reform, and a rule of law system with competitive advantage can attract resources such as capital and talents on a global scale. At present, the Global Trade Facilitation Architecture Land Rush puts forward the challenge to the information governance, and it is a common method to adopt the personal information protection mechanism. In fact, personal information protection mechanisms alone are not sufficient to meet the challenges posed by the Information revolution, and states need to monitor and control the entire flow of information, optimize decision-making and regulatory mechanisms through data collection, analysis, and feedback. Today, the United States, China, the European Union and other major countries and regional organizations are engaged in a global race to find the first alternative to personal data protection mechanisms to deal with the Information revolution, and bring its unique regulatory regime to the global market, who will be able to gain an advantage in the next era of economic development.

Yang Ming: The Protection of personal information involves two dimensions of national security and the protection of individual rights. The purpose of supervision should be made clear when establishing the supervision mechanism. The conflict between different values may make the formulation and implementation of supervision very complicated.

Bian Renjun: First of all, not only in the field of personal information protection, the United States in many legal issues have adopted a pragmatic approach, which is bound to have its cultural heritage reasons. Secondly, China’s research on the protection of personal information has drawn lessons from Europe, often ignoring an important fact, that is to say, strengthening the protection of personal information will inevitably hinder the development of artificial intelligence and big data, which rely heavily on personal information. Therefore, from the result-oriented point of view, the pragmatic approach adopted by the United States, where AI technology is flourishing, has high reference value for China and should be used for reference. Finally, the legitimacy of the pragmatic approach may be called into question. However, pragmatism is concerned about the concrete implementation effect of laws and regulations, and its impact on individuals and the whole society, so the path of pragmatism is rooted in the democratic system.

Although on the surface the American model is more in line with China’s needs, China should use its unique economic structure, economic strength and traditional knowledge structure as a basis for shaping possible new models. First, China’s rural economy is different from that of other countries. The average Chinese farmer knows the existence of a national market, even if he has never been outside the countryside. Second, China’s economy has continued to grow rapidly since the introduction of the Reform and opening-up policy, and decisive progress has been made in the fight against poverty, making the peasant economy more powerful. Through the Belt and Road, China has provided a model for the economic development of the countries along the belt and road, while continuing to work the Chinese miracle during the period of economic slowdown. Third, the integration of Chinese cultural traditions, including Confucian culture, inspection system.

Dai Xin: China’s Unified Information Regulation System is also in the accumulation of previously dispersed in various sectors and fields on the basis of the formation of the rules. Similar to the “Privacy Act” of the United States, the Social Credit legislation in various parts of China clearly reflects the orientation of realizing the value of information public governance on the basis of protecting information rights and interests. The challenge for China’s information governance model to export its own regulatory structure through platforms such as Belt and Road is that Western countries will accuse China of exporting “Bad” practices and policies to developing countries. Moreover, many of the “Belt and Road” countries that have adopted a personal information regime similar to the EU’s generic data protection rules seem to have little incentive to change, or are reluctant to do so themselves.

Jane K. Winn: If the Chinese government reaches out to developing countries and promises to bring human, capital, and other resources to help them in a meaningful way, instead of just working with the leadership, this more humanism model of economic development is what the Belt and Road seeks and is the basis on which the Chinese model can be exported. So China needs to find a way to make itself a fully trusted partner of the Belt and Road.

Chen Yifeng: We are witnessing the localization of data and the fragmentation of the Internet. If we cannot handle it correctly, new North-South problems may arise.

Jane K. Winn: The more global the problem, the more the advantage of the American pragmatic path, the more the country that takes it will be able to clarify the problem. If information governance is used as a basis for competition, then the problems of data localization and internet fragmentation will become barriers to competition, and if countries solve these problems, society as a whole will benefit.

Translated by: He Jinghan