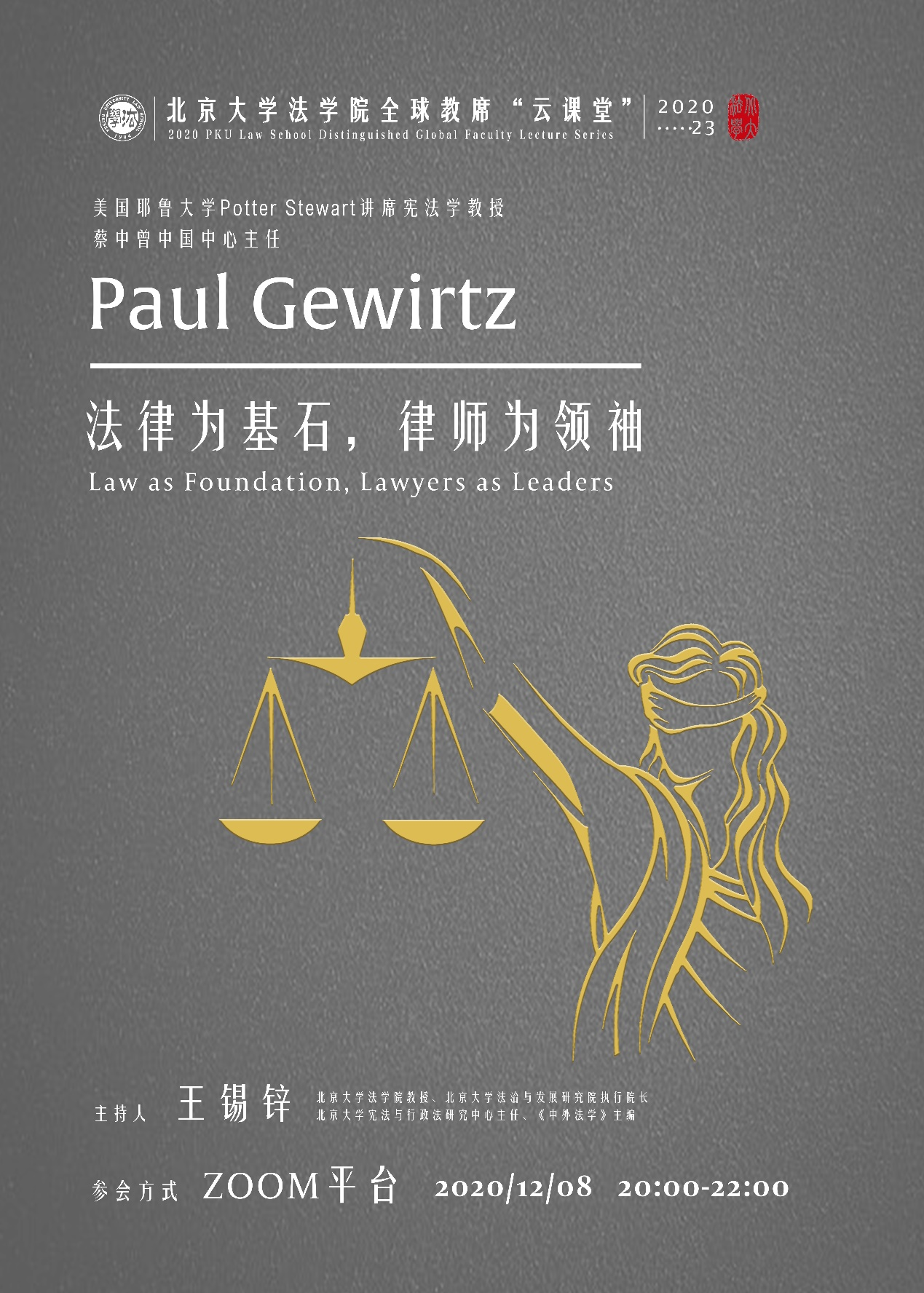 Professor Paul Gewirtz offers courses on constitutional law, the federal court system, anti-discrimination law, law and literature, Chinese law and United States foreign policy. His writings include The Story of the Law and The American System of Case Law, as well as nine textbooks on comparative constitutions. Through Tsai Chung's China Center, he conducted research and education on the development of China-U. S. relations and the development of Chinese law. He also worked with his Chinese counterparts in related fields to promote the reform of the Chinese legal system and to promote more common and deeper understanding and cooperation between China and the U.S. For ten years, he has also served as chairman of the Global Constitutional Conference, a member of the American Law Institute and the Congressional Foreign Relations Committee. Professor Gewirtz was an assistant to Judge Thurgood Marshall of the U.S. Supreme Court and practised at the Wilmer, Cutler & Pickering Law Firm and the Center for Law and Social Policy in Washington. In addition, he also serves as the Chair Professor of Peking University Jones Day Globalization and Rule of Law.

This article presents the communication and dialogue between the scholars in the form of transcripts.

The prosperity of American society cannot be separated from its unique "rule of law" foundation. It is true that the American-style rule of law has encountered many social criticisms and realistic challenges, but following legal norms and respecting the spirit of the rule of law will undoubtedly make society more fair, just, prosperous and stable. In China, the law has the same facilitating effect. Over the past four decades, China’s rule of law has advanced by leaps and bounds. Although there are fundamental differences in political systems between China and the U.S., no matter what the differences are, the following two points are indispensable for any country: first, the law is not only used to regulate society, but also It should be used to regulate the government itself; secondly, continuous and effective national legal debate is the most important way to improve the domestic legal system.

However, the boundary of the law discussed in "Law as the Cornerstone" is not limited to the domestic perspective, but its vision should be more ambitious-law not only plays a role in a certain country or region, but also continuously influences and even shapes the international order. There are two main types of law under the international order and international perspective. Domestic laws are one of them. It can produce extraterritorial effects and can have a significant impact on international trade, international investment and other affairs. However, domestic laws are obviously incapable of solving global problems or many international disputes. Therefore, we need a higher level of law, namely international law. I think the eight areas that need to pay attention to the role of law most are: climate change, trade system, new technologies, global health, nuclear weapons, cyber security, human rights issues, crisis management. Faced with these thorny issues, the importance of laws and regulations has never been more prominent. Taking the rule of law as the foundation is the starting point for solving many major problems.

If the law is the cornerstone of society, then lawyers should play the role of social leaders. Looking back on history, we will be surprised to discover and lament how important a lawyer is in it: Thomas Jefferson, John Adams, Alexander Hamilton, Abraham Lincoln... these great men once had a common identity, that is, lawyers. To this day, 26 of the 45 presidents of the United States are lawyers. Both the incoming President Biden and Vice President Carmela used to be lawyers. Outside the government system, lawyers have also played an important role in numerous private sectors, social organizations, companies, non-profit organizations, and many social movements. This is not only because the law predominates in the government system, and government decision-making must be in accordance with the law, but also because lawyers have superb analytical skills, outstanding problem-solving skills, extraordinary expression skills, and a deep understanding of the social and political system. Although there are objective differences between China's national conditions and the U.S. it is an irresistible trend for lawyers to play a more active role in the future society.

For this reason, as the best law school in China, the education of Peking University Law School needs to cultivate students’ leadership skills more consciously, not only to help students master the knowledge required for legal practice, but more importantly, to set up a series of courses of political debate and negotiation of political issues, cultivate students' innovative thinking, and make students determined and confident that they can become future leaders. China is undergoing major changes that have not been seen in thousands of years. Young law students have great potential. They are the leaders of the future. They can seize the opportunities of the times and devote more to future social governance.

Wang Xixin: What is the logical relationship between "law as the cornerstone" and "lawyer as the leader"?

Paul Gewirtz: In a society with sound laws, the law lays the foundation for lawyers to become social leaders; in a society where the law is lacking, lawyers should shoulder social responsibility, promote the importance of the rule of law, and tell people why the law is indispensable.

Wang Xixin: Rumor has it that there is a saying in Yale: We study everything but law. Is this true?

Paul Gewirtz: This emphasizes the comprehensiveness of teaching. On the one hand, Yale students need to receive strict legal training. On the other hand, we also encourage them to innovate, expand their knowledge and actively participate in leadership projects. We hope to inspire Yale students to "do big things." We also firmly believe that the younger generation of students will have more unique insights into new things. They are the hope for the future.