Sean Cooney：Digital Labor Platform From The Perspective of Comparative Law

On November 24, 2020, Sean Cooney, Global Chair of Peking University Law School, Vice Dean of Law School of Melbourne University, Australia, gave an online lecture with the theme of "Digital Labor Platform from the Perspective of Comparative Law", which was presided over by Yan Tian, Assistant Professor of Peking University Law School. More than 100 students participated online through classroom live broadcast equipment. At the same time, nearly 100 teachers and students from inside and outside schools participated in lecture online through Tencent conference platform, which received enthusiastic response. 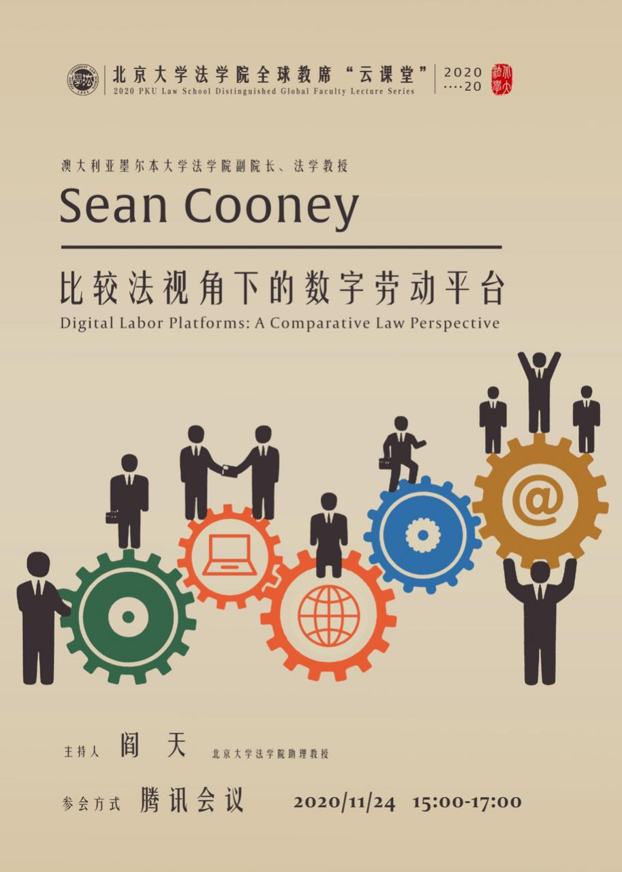 This paper presents the communication and dialogue among scholars in the form of written records.

In the field of international labor law, people have established many standards for the protection of workers' rights and interests through conventions and recommendations. According to the conventions of the World Labor Organization, the four basic principles applicable to all workers are to allow free association and collective bargaining, to prohibit unequal discrimination, to prohibit forced labor, and to prohibit any form of child labor. Ensuring workers' occupational safety and social security are two important principles applicable to all workers. In addition, some non-traditional principles are being established, such as allowing workers to freely choose and switch between different platforms, and requiring data sharing and data privacy protection.

It is difficult to regulate the relationship between the platform and workers, because there are great differences between different types of platforms and workers in different situations, and the business operation of the platform may involve multiple jurisdictions, which leads to the complexity and difficulty of law application. In addition, people may need to take into account conflicting policy objectives in the process of formulating rules, such as how to balance the two goals of promoting employment and social security.

Many countries have explored the relationship between the regulatory platform and workers in various aspects.

As far as social security is concerned, the challenge brought by the COVID-19 epidemic is whether the platform has the obligation to adjust its management of workers in order to control the epidemic, and even bear certain security costs, such as providing workers with shutdown subsidies to prevent their rework and increase the risk of infection. Although some platforms have already made similar actions, it is necessary for the state to intervene in this issue. Countries such as Indonesia and Malaysia try to extract a small amount of taxes and fees from each transaction on the platform as social insurance funds to provide social security for workers affected by the epidemic.

As far as general data protection regulations and algorithm management are concerned, the European Union and China and other regions and countries have established some new rules to help platform users obtain their own personal data, and workers can use their own data on one platform to apply for jobs on another platform. However, the real problem is that there are data barriers between different platforms, and data cannot be smoothly circulated and transformed between platforms. In addition, the new rules also regulate the algorithm management, which does not allow the platform to make automatic decisions based on algorithms, but it is unrealistic for platforms such as network car platform that rely on algorithms for operation management.

As far as dispute resolution is concerned, there are three important issues. First, can the platform and workers exclude the jurisdiction of the court in the contract and only resort to arbitration institutions to resolve disputes? Except the United States, most countries are not allowed to exclude court jurisdiction by contract. Second, is overseas arbitration allowed? The courts in Canada, Britain and Kenya hold that it is unreasonable to appoint the arbitration place in a third country that has no connection with the platform and workers. Third, is it allowed to apply foreign laws in domestic courts? China, EU and India refuse to apply foreign laws in their courts.

Sean Cooney: The traditional way is to study and regulate the results caused by algorithms and programs. It is difficult to ask the platform to disclose the algorithm and explain how it works, because even if the law allows us to do so, we probably still can't understand the operation of the algorithm, and it is much more difficult to prove that an algorithm is at fault than a person.

Yan Tian: In recent years, the research on digital labor platform and labor law is very popular. Most problems in this field have been discussed. Are there any directions and problems to be explored in this field?

Sean Cooney: Of course, for example, how to conduct collective bargaining through the Internet, how to ensure workers' work safety under the COVID-19 epidemic, and how to set the minimum salary standard for workers in non-labor relations.