On November 16 and 17, the central government’s conference on work related to overall law-based governance was held in Beijing. Xi Jinping, General Secretary of the CPC Central Committee, President of the State, and Chairman of the Central Military Commission attended the meeting and delivered an important speech, comprehensively summarizing the achievements of the rule of law since the 18th CPC National Congress, profoundly clarifying the great significance of advancing the overall law-based governance in the new era, providing scientific answers to a series of major theoretical and practical issues concerning the rule of law with Chinese characteristics, and laying down a strategic deployment for governing the nation by law for the present and a period to come. This is a major event of great practical significance and far-reaching historical meaning in the process of building socialist rule of law in China. With the unfolding of the blueprint, the Peking University Law School swiftly set off an upsurge of study and implementation, immediately organizing student Party branch secretaries and key members of the Youth League and student union to study the contents of the meeting together and earnestly comprehending Xi Jinping thought on the rule of law.

On November 18 and 20, the Law School organized all student Party branch secretaries and the key members of the League and student union to hold special study sessions respectively to study the important speech of General Secretary Xi Jinping and the spirit of the central conference on work related to overall law-based governance. Assistant to the Dean of the Law School and Youth League secretary, Shi Shi, full-time counselor, Li Hejun, and Deputy Secretary of the Youth League, Li Wanyu attended the meetings together.

At the meeting, the Party branch secretaries and key members of the League and student union had in-depth discussion and exchange. They reported the lessons gained on learning Xi Jinping thought on the rule of law in combination with their professional accumulation and work practice, and had a deeper understanding of its rich meaning, profound elaboration, strict logic, and complete system. Xi Jinping thought on the rule of law has provided profound answers to a series of major questions in the new era, including why and how to implement the overall law-based governance by connecting history with reality, relating international situation with domestic conditions, and combining theory with practice, serving as the fundamental guideline for the law-based governance in China. Attendants all expressed that in their future study and work, they would uphold the basic spirit and core principles of Xi Jinping thought on the rule of law, and contribute their youthful strength to China’s efforts in comprehensively building a modern socialist country on the track of the rule of law and realizing the Chinese dream of the great rejuvenation of the Chinese nation. 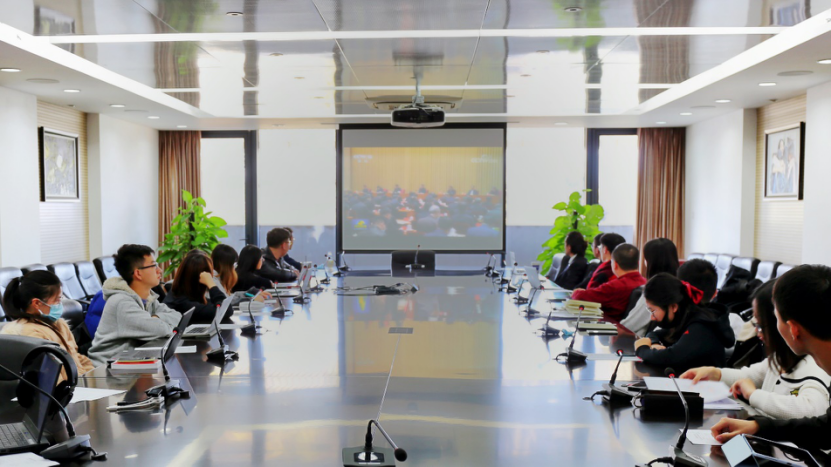 Mr. Shi Shi said in his speech that Xi Jinping thought on the rule of law has provided fundamental guideline and inexhaustible impetus for the overall law-based governance and the realization of a better rule of law in the new era. He encouraged students, as the young legal professionals in the new era, to strengthen their belief in the rule of law, pool their legal strength, study hard, think deeper, be brave and tenacious, and integrate theoretical study, practice and quality development together to contribute to the vigorous development of the socialist rule of law with Chinese characteristics. Li Hejun and Li Wanyu respectively made specific arrangements for the in-depth study, publicity and implementation of Xi Jinping thought on the rule of law and the spirit of the central conference on work related to overall law-based governance by the student Party branch, Youth League branch, and student union.

Paying high attention to Xi’s thought on the rule of law as an integral part of the thought on socialism with Chinese characteristics for a new era, the Law School will thoroughly implement it, keep in mind the fundamental task of foster virtue through education, strengthen ideological guidance among young people, and carry out targeted learning and education activities with clear themes and vivid forms. We will also promote the spirit of the central conference on work related to overall law-based governance, help our youths to organically integrate the cultivation of personal value, social responsibility, and national sense of honor, and encourage young legal professionals to rise to the clarion call of the new era and embrace the glory of the law-based governance with the youth of struggle.