You are here： Home» News» Global» Thomas J. Stipanowich：The "Change of course" in international commercial dispute settlement -- the combination of arbitration and mediation

On November 13, 2020, Thomas J. Stipanowich, Global Chair of PKULS, William H. Webster Professor of Pepperdine University, and Professor of Straus Institute for Dispute Resolution, gave academic lectures on the theme of "The Combination of Arbitration and Mediation -- How Arbitrators Promote International Commercial Dispute Resolution". The lecture was presided by Gao Wei, A.P. of PKULS, and more than 40 teachers and students participated in and benefited from the lecture. 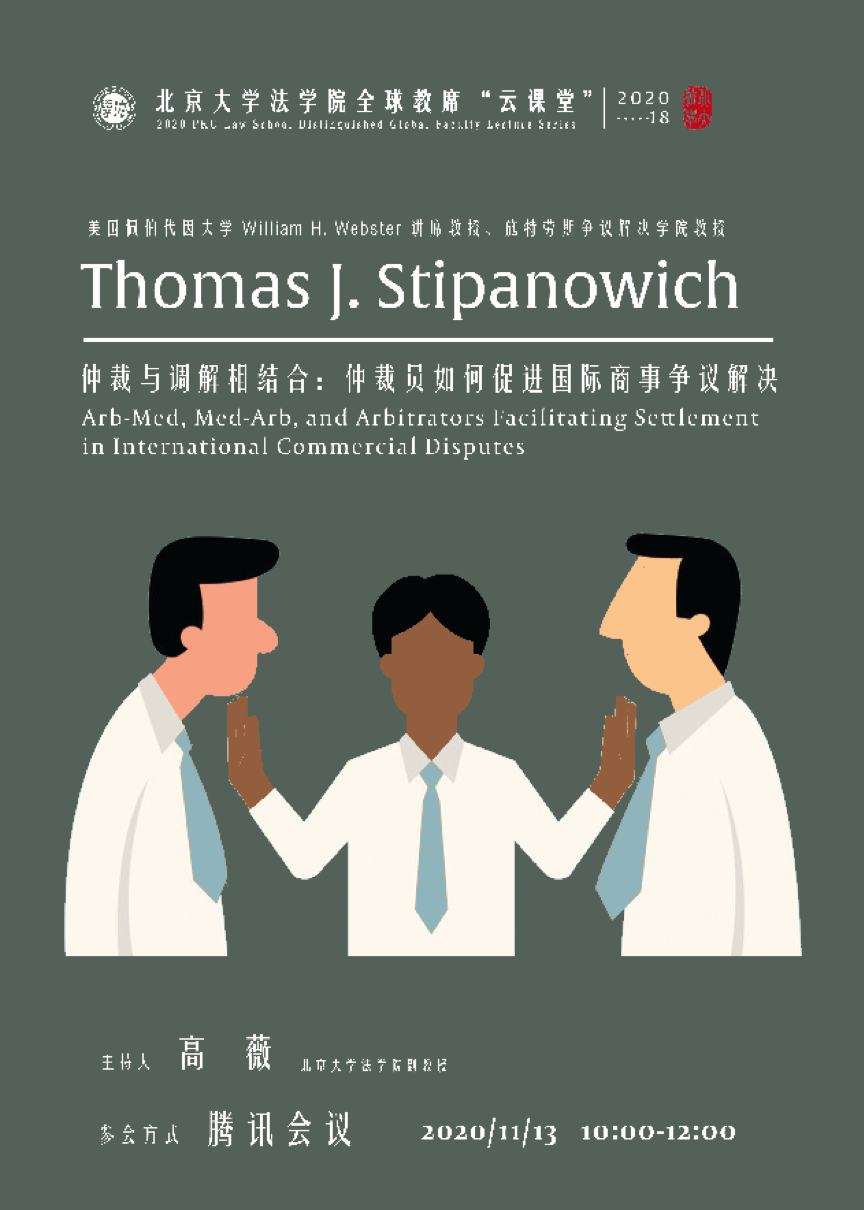 Prof. Thomas J. Stipanowich is William H. Webster Professor of Pepperdine University, and Professor of Straus Institute for Dispute Resolution. Prior to joining Pepperdine University, he was President and CEO of the New York-based Institute for Conflict Prevention and Resolution (CPR), an organization that offers new perspectives and approaches to resolving business disputes. Under his leadership, the agency expanded its presence in the EU and China, including the establishment of the Sino-American Commercial Mediation Center with China Council for the Promotion of International Trade and the first European Conference on Commercial Mediation. In 2008, he received the Alembert-Raven Award (the American Bar Association's Division of Dispute Resolution honors outstanding contributions to the field). In 2016, he received the James Henry Award from Institute for Conflict Prevention and Resolution (which honors "individuals who have made outstanding contributions to the field of dispute resolution").He has written more than 50 books, including a five-volume "Federal Arbitration Act: Agreements, Awards, and Remedies in Federal Arbitration Law," cited by the United States Supreme Court and many other federal and state courts. He is a Member of the Academic Advisory Group of the International Arbitration Institute and the Advisory Panel on the Restatement of the United States International Arbitration Law, American Institute of Law. He also leads the International Working Group on mixed Modes of Dispute Resolution to explore the interaction between arbitration and resolution-oriented mediation.

This paper presents the communication and dialogue among scholars in the form of written record. 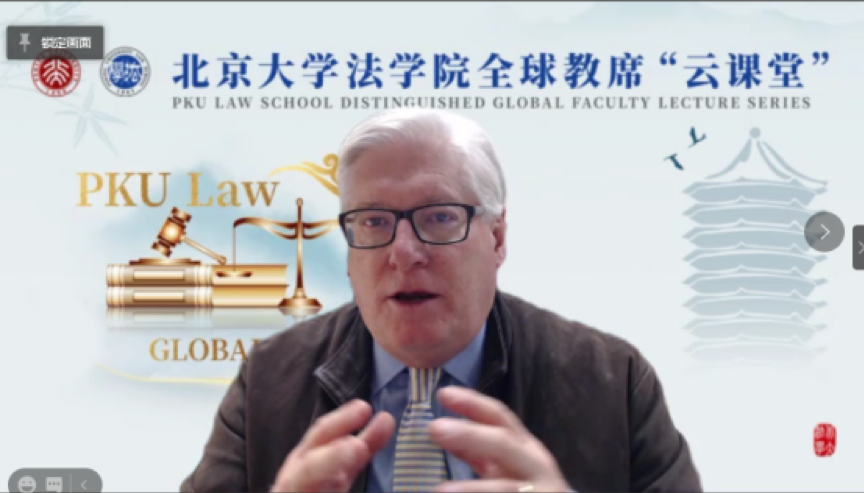 Thomas J. Stipanowich：In today's world, with the development of economy, science and technology, the way of settling international commercial disputes is undergoing unprecedented changes. According to the survey, the most popular dispute resolution mode is the hybrid dispute resolution mode that combines arbitration, litigation and mediation. In this model, arbitrators have a dual role.

In the practical process of commercial dispute settlement, it usually goes through a dynamic process of "change-lanes". For example, in a civil case in Beijing, both parties can decide whether to switch to mediation mode before the formal arbitration process begins. According to the CIETAC Rules, the arbitrator should ask whether the parties are willing to mediate.

Generally speaking, under the "mixed mode", the dispute resolution mainly includes the following types :(1) mediator initiating the award mode -- sometimes the mediator may not be able to resolve the dispute, but it can promote the parties to reach an agreement on the dispute resolution mode;(2) The arbitrator shall initiate the mode of reconciliation and offer a preliminary view;(3) The "channel changes" mode (Switching hats) is used by the same mediator and arbitrator;(4) The arbitrator shall confirm the validity of the settlement agreement, that is, both parties reach a settlement agreement and apply for the arbitrator to confirm the validity of the settlement agreement, which is more common in Chinese jurisdictions.

There are many disputes about "lane change" modes such as "mediation-before-arbitration", "arbitration-before-mediation" and "arbitration-mediation-arbitration". For example, having the same mediator and arbitrator presents some problems. First of all, the negotiability of the mediation procedure and the adjudication of the arbitration procedure mean that the roles of mediator and arbitrator are fundamentally incompatible. In other words, a good arbitrator may not be able to perform the role of mediator. Second, the mediator or arbitrator has too much discretion and can even interfere in the selection of procedures. For example, some arbitrators are better at mediation, which is, forcing both parties to choose mediation over arbitration, which will not only lead to the inefficiency of the dispute settlement process, but also threaten the neutral nature of arbitrators and the legitimacy of the procedure. Even if an arbitration award is eventually made, the award may be challenged. In addition, as neutral third parties, the change of the identities of arbitrators and mediators may threaten the confidentiality of the procedure and lead to the disclosure of the information of the parties.

In practice, many countries, such as the United States and China, have adopted the "lane change" dispute settlement model. Lane changes are not explicitly prohibited by US law, but they may result in the arbitration award being revoked or rejected. Lane change is also discouraged in procedural law and moral codes. The main reason is that under the "lane change" mode, there are doubts about regulation, individual rights, due process, transparency, neutrality of the third party in dispute settlement, confidentiality of mediation, and professionalism of arbitrators. But the advantage of lane change is that the choice of parties is more flexible, does not destroy social relationships, ensures a degree of confidentiality, and satisfies pragmatic considerations such as economics and efficiency.

In China's judicial practice, mediation is often not an independent professional activity, but given consideration by other institutions. For example, government officials, judges and arbitrators should give consideration to mediation within their terms of reference. Among them, judges and arbitrators will propose to adopt the "lane change" mode when helping parties to resolve disputes. For example, in the case of arbitrators adopting the TSO, pretrial mediation may also include such forms as private meetings. Unlike American law, traditional Chinese judicial practice is more supportive of neutral third parties playing multiple roles in dispute settlement. This may be because China places more emphasis on harmonious interpersonal and social relations, and more emphasis on the protection of personal interests, including the enhancement of confidentiality. In addition, guidance from government departments also plays an important role.

The different practices of "lane change" between The United States and China have brought some challenges to the establishment of international commercial dispute settlement rules. In different cultural backgrounds and judicial traditions, the priority and value orientation of dispute resolution are quite different. In the "lane change" mode, this difference is reflected in the different cognition of the roles of mediator and arbitrator.

In view of concerns about the "lane change" model, a draft guideline for practice is proposed to provide guidelines for commercial entities, lawyers, dispute resolution professionals and dispute resolution service providers. This code of Practice focuses on the following:

First, the professionalism, effectiveness, independence and neutrality of a neutral third party in dispute settlement should be emphasized. Secondly, there should be clear written provisions on the scope of dispute resolution, the division of procedural stages, the time limit of each stage, and the characteristics of mediation and arbitration procedures. Particularly noteworthy is that standards should be included in the exemption clause, or any one of the parties in dispute settlement neutral third parties have been involved in the arbitration before the dispute resolution process or contact with one side had grounds alone, denied as arbitrators of the third party, or is not recognized as reason to apply for cancellation, or not to perform the third party to the arbitration award.

Gao Wei: Mediation has been hailed as an Oriental experience. The modern litigation service concept currently being implemented by the Supreme People's Court of China emphasizes the importance of resolving disputes before litigation, and the specific work includes the "mediation docking" and the use of various mediation mechanisms to resolve disputes.

Thomas J. Stipanowich：China's experience has certainly helped the lane change model. More recently, courts in New York City have established a model of compulsory mediation, in which mediation must precede a lawsuit. The assumption behind this is that if mediation is undertaken, the case will most likely be resolved before the proceedings. But the US legal community remains divided over compulsory mediation.

Thomas J. Stipanowich：In American law and judicial practice, the mediation process is usually separate from the trial process, meaning that the judge does not participate in the mediation. It is common for a party to ask a third-party mediator, such as a judge other than the one handling the case, to act as a mediator. A judge may advise the parties to settle on their own, but does not call it mediation.

Question: Given the many drawbacks of lane change, is it prevalent in the United States?

Thomas J. Stipanowich：That's why we're doing this lecture. The key is to have enough trust between the parties and trust the mediator's mastery of the "lane change" model.