You are here： Home» News» Global» Zhang Tai-Su: The New Theoretical Construction of the Emergence of the Business Corporation Caused by the Modern State Building

Zhang Tai-Su: The New Theoretical Construction of the Emergence of the Business Corporation Caused by the Modern State Building

On November 7, 2020, Peking University Law School (PKULS) distinguished global faculty, Professor at Yale Law School, gave an online academic lecture on “State Building and the Emergence of the Business Corporation”. The lecture was conducted by Associate Professor of the PKULS, Zhang Yongle, and attended by Associate Professors of the PKULS, Chen Ruoying and Dai Xin. More than 200 teachers and students from both inside and outside the university participated. 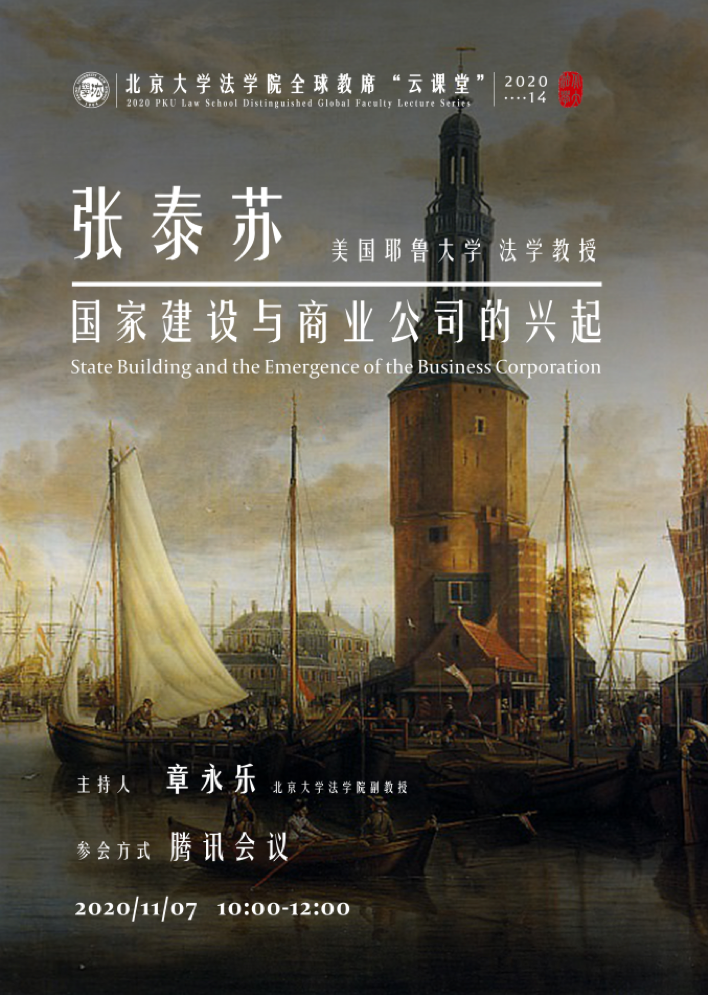 Professor Zhang Taisu is a professor of law at Yale University. His main research area are comparative legal history and economic history, private law theory and contemporary Chinese law and politics. He holds a bachelor’s degree in history and mathematics, a doctorate in law and a doctorate in history from Yale, and was an Associate Professor at Duke University School of Law. He has also taught at Brown, PKULS, Tsinghua University School of Law and the University of Hong Kong. Representative academic work includes the book “Confucian Law and Economics: Kinship and Property Relations in Pre-Industrial Britain and China”, published by the Cambridge University Press. In 2018, he received the Presidential Award from the American Society for the History of Social Sciences and the Smith Book Award from the Macmillan Publishers Center for International and Regional Studies at Yale. His previous doctoral thesis was awarded the Arthur and Mary Lahitte doctoral thesis prize at Yale University and the Catherine Prize at the American Legal History Association. His second book, “the ideological basis of the financial state in the Qing Dynasty,” is in the final draft. Professor Zhang has published articles, papers and books on a wide range of topics and has won awards from various academic organisations.

This paper presents the core points of the lecture in the form of transcript. 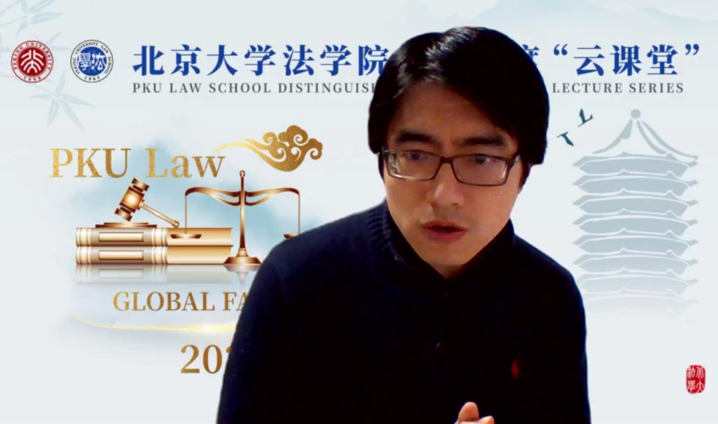 Zhang Tai-Su: Why did business corporations emerge so late in human history? The so-called “business corporation” refers to an entity with the characteristics of independent legal person status, collective governance structure, equity financing, investment lock-in and asset segmentation. Although the first four characteristics have existed in pre-modern enterprises, the division of assets is a quite modern phenomenon to a large extent.

The established explanations for the rise of modern business corporation can be divided into two categories: one based on the demand side, emphasizing the role of interregional trade and commercialization, and the other based on the supply side, emphasizing the ability of states to make credible commitments to protecting corporate assets. Of course, these two explanations are not mutually exclusive, but they are imperfect in two respects: first, demand side conditions need to be described in more general, theoretically abstract terms, in order to grasp the continuing attraction of modern companies in economic situations that have little to do with long-distance trade, and secondly, the positive contribution of modern state-building to corporate forms has been overlooked by these two explanations. China’s late Qing Dynasty is exactly a counter-example to the above two explanations: although the demand and supply conditions are satisfied at the same time, the modern enterprise form did not come into being.

Aiming at the deficiencies of the existing theories, a new theoretical framework needs to be constructed and interpreted in order to recognize the positive role played by the state in the rise of business corporation and a more systematic description of the demand-side conditions. Applying this theoretical framework to the historical legal systems of China, Ottoman, Germany, the United Kingdom, the Netherlands and the United States shows that it is more reasonable than previous theories.

On the demand side, modern business corporations have emerged in response to the need for cooperation among a large number of strangers who enjoy the same residual claimant status as corporations engaged in “intensive” economic activities. By providing corporations with the legal and administrative basis necessary to implement M & A and investment agreements, modern states have made a positive contribution to the development of companies, and to be more exact, the rise of modern corporations depends on, and will continue to rely on the building of a modern state. The development of the company depends in particular on the creation of a specialized judicial system with strong information and enforcement capabilities.

Further refinement of the demand conditions leads to the following four functional conditions: “massive”, “between strangers”, “residual claimant status” and “thickness”. “Between strangers” means that business partners do not belong to a closely connected community and therefore cannot rely on the interpersonal relationships and social capital of their members. The “residual claimant” is an economic entity that has a residual claim upon an organization’s net cash flow after deducting the claims of the prior agent, and therefore bears the residual risk of its business activities. “Thickness” is a new term used in this theoretical framework, which refers to the lack of sufficient predictability of corporate activities and a high degree of complexity and contingency, and cannot be resolved by contract.

It is precisely because the business corporation form is used to co-ordinate long-term or intensive investments between large numbers of strangers that it is dependent on the construction of modern states and the arrangements of legal systems in sustaining them. In pre-modern economic life, customary law autonomy within closely linked communities and cross-regional networks of brokers, arbitrators and local laws such as medieval merchant law played an important governance role. For the former, it is not that the pre-modern community autonomy cannot provide the modern asset partition system, but that the tight-connected communities lack the demand for the divided assets. For the latter, while such networks can sustain relatively strong interregional trade, their reliance on intermediaries limits the scale and complexity of interregional cooperation. Therefore, the modern state and the modern legal system have a unique function —— to systematically support the establishment of a “thick” commercial relationship between distant strangers.

Compared with customary law autonomy and interregional network governance, modern states have four advantages: first, they typically cover a larger territory and have greater internal legal coherence; and second, they have stronger enforcement powers thus make them able to enforce its own judgments against internal and external persons; third, it has a stronger ability to circulate information among strangers; and fourth, it can provide potential investors with a relatively strong guarantee that they will be treated equally. Among these, the fourth advantage of equal treatment is important. Since shareholders are essentially residual claimants to the company’s assets, their willingness to invest depends, to a large extent, on which they are guaranteed equal treatment in their respective investment agreements. The political foundations of the modern state and legal system tend to be more objective, formalized, predictable and transparent than the internal autonomy of the community, all of which contribute to a more credible commitment.

In response to the opening questions, the modern state’s commitment to the equal treatment of investors, together with its information advantages and law enforcement capabilities over a wide range of territories, enabling the modern state to provide institutional support for modern business corporations composed and run by large numbers of strangers. And that is what pre-modern customs or laws cannot provide.

In 1903, China’s “Company Law” for the first time put forward the concept of asset division. Prior to this, there was no asset division system in the joint ventures between family enterprises or between them, especially the limited liability system. After 1980, state building under the leadership of the Chinese Communist Party finally provided the basis for large-scale corporate mergers.

Question: The division of assets is achieved through the enactment of national laws, and cannot be achieved through contracts. How could the practice of asset segmentation come into being in the pre-modern society?

Zhang Tai-su: Limited liability can be established through contracts, but the division of assets needs to rely on the law. The division of assets is actually a kind of property rights, the need for the construction of a modern country. Because asset segmentation has the function of risk redistribution, thus the acquaintance society does not need this kind of risk allocation mechanism, it is unnecessary in the acquaintance society.

Question: Does a closed corporation, with families and acquaintances as its core, need to be a modern company?

Zhang Tai-su: “The acquaintance society does not need the company”, does not mean that the acquaintance does not need the company. There are still examples of modern corporate forms being used by acquaintances in the modern world. Before the rise of the modern state, there were many providers and enforcers of rules, such as chambers of commerce and villages. Once the modern state arose, it would crowd out other providers and enforcers, they are in a hostile relationship. Under the different society and the rule, people’s thinking way is different, so as the thinking style of the acquaintance society and the stranger society.

Question: Is the concept of “thick activity” compatible with the uncertainty of incomplete contracts in law and economics? Is the cause of this uncertainty consistent with the human (manager) uncertainty in organizational law? How does the newly proposed term “thickness” differ from the traditional economic terms “agency problem” and “control problem” ?