You are here： Home» News» Global» Charles K. Whitehead: Principles, Hot Spots and Challenges of the Regulation of Securities in the United States

Charles K. Whitehead: Principles, Hot Spots and Challenges of the Regulation of Securities in the United States

November 9 and 16, 2020, Charles K. Whitehead, Global Chaired Professor of PKULS, Myron C. Taylor Chaired Professor of Business Law at Cornell University, and Director of the Law, Technology, and Entrepreneurship Program at Cornell Technology Park, gave two online academic lectures on the theme of "Supervision of the Capital Market in the United States: Overview and Hot Spots". The lecture was presided by Professor Guo Li, Party Secretary and Vice Dean of PKULS. 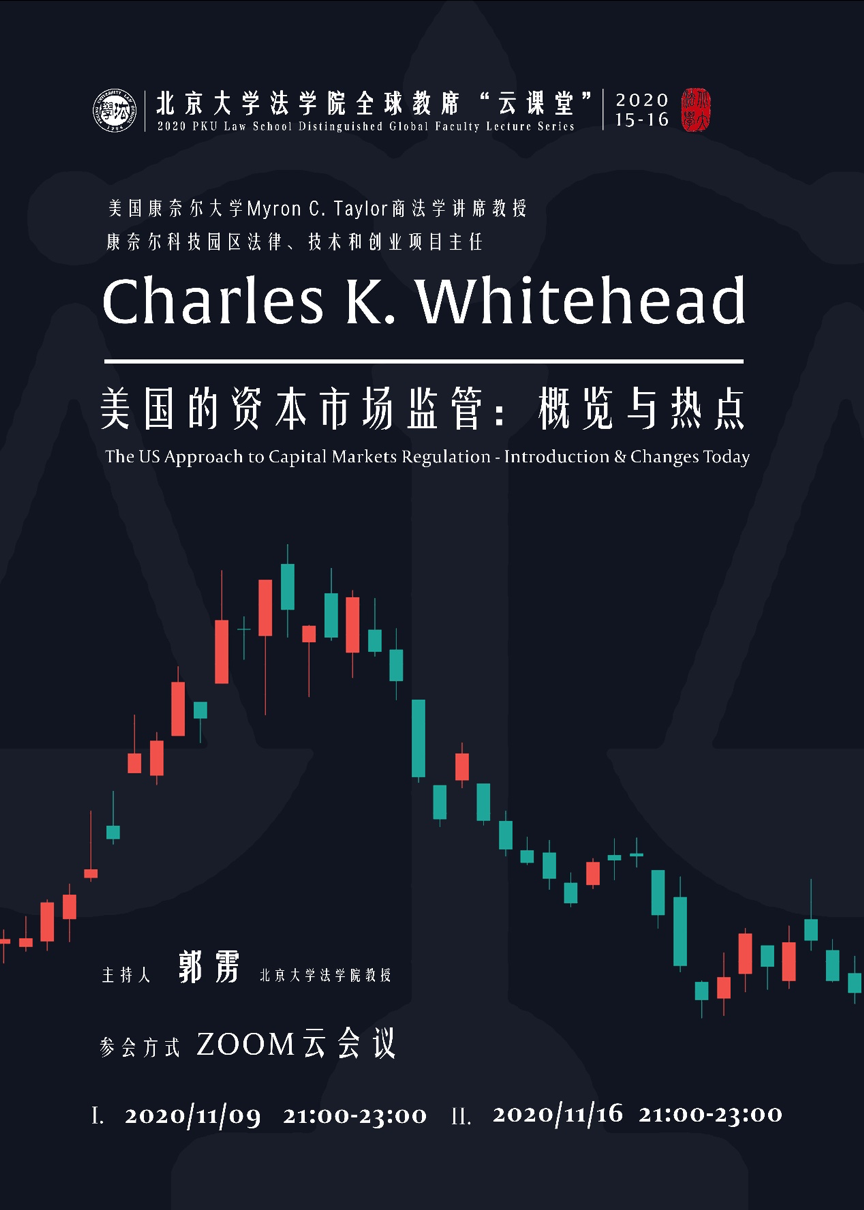 This paper presents the core points of the lecture in the form of text records.

I. Fundamentals of Securities Regulation in the United States

Charles K. Whitehead: The Securities Act of 1933 and the Securities Exchange Act of 1934 were enacted by Congress of the United States in response to the Great Depression of 1929. The Securities and Exchange Commission (the "SEC") was created. The two laws provided two types of rules for such subjects as issuers namely, affirmative disclosure rules and liability for breach of obligations, so as to achieve the legislative goal of protecting the rights and interests of investors.Rule 10b-5 of the SEC pursuant to Section 10 (b) of the Securities Exchange Act of 1934 is the material anti-fraud provision, the imposition of information disclosure obligation and legal liability for anti-fraud would help to reduce the possibility of fraud in transactions, reduce the probability of unreasonable investment, increase investors' confidence and investment willingness, and ultimately benefit the entire securities trading market.

How "securities" is defined affects the scope of federal securities regulation. In the 1946 SEC v.w.j. Howey Co. (hereinafter referred to as the "Howey case"), the Supreme Court better accomplished its legislative purposes by interpreting "investment contract" under Section 2 (a) (1) of the Securities Act of 1933 to determine whether the relevant trading arrangement constitutes a security, by providing a more flexible standard to accommodate variable business activities. According to the Judgment of Howey case, an "investment contract" consists of four elements: (1) make an investment of money or other consideration, (2) invest in a common undertaking, (3) expect to derive a benefit from the investment, and (4) depend on the efforts of others (hereinafter referred to as the "Howe Test").

Federal securities regulations are not applied on a "one-size-fits-all" basis to all offerings of securities. The influencing factors include: First, the publicity of distribution activities. Second, physical proximity between the issuer and the investor. Third, the degree of sophistication of investors. Thirdly, the "sophistication" of investors. Federal securities laws generally focus on protecting ordinary investors, while relaxing protection for mature investors.

Some empirical studies show that there is no significant abnormal returns in the securities market before and after the promulgation of the Securities Act in 1933. Some commentators thus believe that the obligation to disclose information has produced no significant effect. One possible explanation for this finding is that disclosure helps investors better identify and assess risk, an effect that is not reflected in the value of extraordinary returns. Investors' perceptions of risk are changing. In the era of the Securities Act of 1933, people are concerned about the risk of a single security. More than 20 years later, with the introduction and extensive application of portfolio theory, (institutional) investors can no longer worry about the risks of individual securities and focus on systemic risks. Changes have also been made in the disclosure of information required under federal securities laws.

Question: What is the relationship between the SEC's "Regulation Best Interest(BI)" and the Investment Advisers Act of 1940 ?

Charles K. Whitehead: Regulation BI is the rule for brokers under the Securities Exchange Act of 1934 which requires brokers to take into account the "best interests" of consumers and to impose certain duties to disclose information.Although similar, Regulation BI does not protect investors as much as it owes an investment adviser's fiduciary duty to clients under the Investment Advisers Act of 1940 ("IAS"). This is the product of the compromise in the legislative process.

Question: Is it possible for the federal and state securities laws to cause "dual regulation" of the same securities or securities trading?

Charles K. Whitehead: There is indeed an overlap, but in most cases federal securities laws would take precedence.Because federal securities laws provide adequate protection, and their disclosure obligations to issuers satisfy censorship requirements, excluding the application of state securities laws can reduce issuers' costs and improve economic efficiency.In fraud cases, however, state law still applies, in order to achieve the best possible protection for investors, both at the federal and state levels.

Question: Why is joint undertaking a standard of defining an investment contract?

Charles K. Whitehead: The idea of joint undertaking as a definitive criterion is to distinguish investment contracts from private contracts which are one-to-one.

Charles K. Whitehead: In recent years, one of the hot issues in the field of securities regulation in the United States has been whether cryptocurrencies constitute securities. With respect to Bitcoin, bitcoin has its own value, and its value is not directly related to the secondary exchange market, so the SEC does not regard Bitcoin and its trading as the scope of securities laws. However, whether this attitude will change in the future is a question that deserves further attention.

The second hot topic is the adjustment of the scope of application of federal and state securities laws. For example, Section 3 (a) (11) of the Securities Act of 1933 provides for the exemption from federal securities laws from transactions in securities within state, and SEC Rules 147 and 147A are specific provisions governing the application of Section 3 (a) (11). Another example is that Regulation D under the Securities Act of 1933 is also an exemption from the registration of the relevant securities issuance. Politically, on November 2nd, the day before the presidential election, the SEC issued Release No. 33- 10844, among other things, to modify Rule 504 under Regulation D to raise the maximum number of eligible securities issuances exempt from registration from $5 million to $10 million.

The third hot topic is whether the liability for misrepresentation under Section 12 (a) (2) under the Securities Act of 1933 shall remain inapplicable to the private placement. Section 12 (a) (2) of the Securities Act of 1933 is not applicable to a private placement of securities pursuant to the judgment of the United States Supreme Court in 1995 in Gustafson v. Alloyd Co., Inc. This means that private placement will only be subject to SEC Regulation Rule 10b-5. This has led to huge loopholes in the private equity market, and continues to cause concern, so the legitimacy of this precedent is disputed. Subject to the validity of the Gustafson v. Alloyd Co., Inc.'s decision can be considered from both the investor and the issuer. Firstly, raise the asset threshold for accredited investors. Secondly, the CSRC imposes other types of obligations on non-public issuers to strengthen the protection for investors.

The fourth hot issue is crowdfunding. Motivated by Silicon Valley startups and others, former US President Barack Obama signed the Jumpstart Our Business Startups Act in 2012, aiming to maximize the role of these enterprises in promoting employment by encouraging entrepreneurship and supporting small and medium-sized enterprises (SMEs) by lowering the cost of financing. However, these Internet startups are the riskiest securities issuers. Therefore, the JOBS Act also imposes certain restrictions on issuers' maximum financing amount, investors' investment amount and disclosure obligations on issuers and platforms. Since then, the SEC has been adjusting the balance between the goal of promoting entrepreneurship and creating jobs and the risk of regulation. Also released on Nov. 2, Release No. 33- 10844, the SEC increased the maximum crowdfunding to $5 million from $1.07 million, reflecting a relaxed approach to the sector.

Finally, attention should be paid to the impact of market changes on risk. At first, people thought that risk and security are two sides of one body, the two can not be separated. But the new ways of trading changed that. The understanding of risk in legislation and judicature should be updated in response to market changes.

Question: Has the SEC recognized the decisions made by the Securities Regulatory Commission of other countries to avoid transnational securities fraud?

Question: Is the crowdfunding platform obligated to review the substance of the offering and disclosure?

Charles K. Whitehead: Yes. The platform has an obligation to regulate crowdfunding, which is an affirmative regulatory obligation, and if it breaches its obligations, it should be held accountable.