On November 12, 2020, attorney Peter J. Wang, the global chair of Peking University Law School (PKULS), the head of the China Antitrust Legal Services Department of Jones Day and the partner in the Hong Kong office, held an online lecture on the theme of “Evolving Global Antitrust Law”. The lecture was hosted by Chen Ruoying, associate professor of PKULS. More than 100 teachers and students from inside and outside the school participated in the event, and the response was enthusiastic. 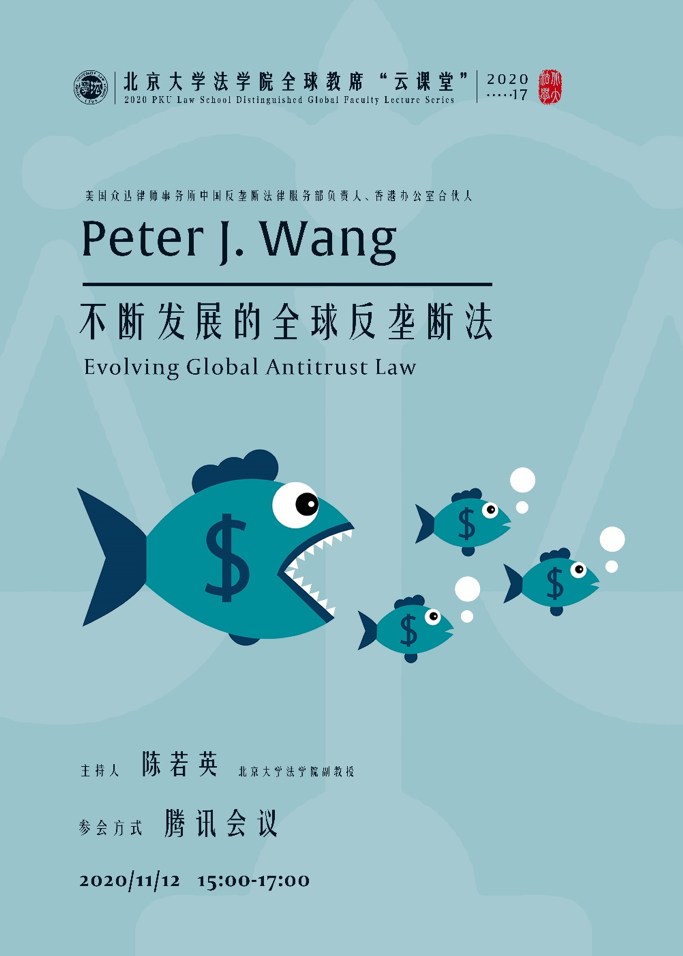 Peter J. Wang is the head of the China Antitrust Legal Services Department of Jones Day and the partner in the Hong Kong office. He was the managing partner of Jones Day Greater China and co-head of Jones Day’s International Litigation and Arbitration Department. Attorney Wang has repeatedly represented clients concerning major antitrust investigations initiated by the US and other governments on proposed mergers and acquisitions. He also handled non-merger-type antitrust investigations and antitrust litigation matters. At the same time, Mr. Wang represents clients in China and around the world in various complex commercial litigation, patent and other technology and intellectual property litigation. Attorney Wang often participates in FCPA investigations and other types of internal company investigations, and advises clients on compliance and due diligence matters. Attorney Wang joined Jones Day in 1991 and has been engaged in litigation and antitrust work in Jones Day’s Washington office before joining the China Office in 2003.

This article presents the transcript of the communication and dialogue. Peter J. Wang：Although the names of Antitrust Law are different between jurisdictions, their connotations are roughly the same. Compared with other traditional sector laws, the antitrust law appeared late. The US promulgated its first antitrust law, the Sherman Antitrust Act, in 1890, but other countries did not begin to develop antitrust laws and related systems until World War II. Since then, the antitrust law has gradually entered a stage of rapid development. By the end of the 20th century, the antitrust law and its enforcement agencies had been well developed in many countries.

There are many reasons for the rapid development of antitrust laws around the world. One of the important reasons is that all the countries want to be ahead of other countries in the field of antitrust, so as to better promote free competition in their own markets and gain an advantageous position in international mergers and acquisitions which may affect the domestic market. As antitrust law has increasingly become a hot global issue, many meaningful questions have been raised on this topic: what is the goal of antitrust law? What are the factors that we need to consider, and how to consider these factors? What kind of result is a good result? Should we trust the market more, or the big companies or government regulators? How do we use antitrust measures to deal with the rapidly developing modern technology and market? Does the antitrust law have universal principles?

The origin, development process and status quo of antitrust law are different in different countries.

The Sherman Act of the US was born under the political background of the Congress being controlled by the trust group. In the following decades, the US Supreme Court gradually established its rule and connotation through precedents. The US antitrust law was born to solve the serious problem of corporate concentration. In the judicial process, in order to avoid complicated and lengthy economic investigations, the courts gradually developed some “per se illegal” rules, which are increasingly questioned and challenged in the process of long-term application. Therefore, the US courts have developed a set of rules that rely more heavily on the analysis of individual facts and the weighing of interests-the “rule of reason”. However, this set of rules also has its problems, such as difficulties in analyzing the facts of judges in individual cases and in providing evidence for the parties. In this context, American Antitrust law has gradually been influenced by economic theories and scholars, especially the Chicago School. These theories and schools have provided theoretical foundations and analytical tools for antitrust practice, such as “the consumer welfare standard”. The US Antitrust system exhibits the characteristics of judicial orientation, while other antitrust agencies have no natural law enforcement power, private antitrust litigation is very developed. In general, the current antitrust system in the US exhibits several obvious characteristics, such as being relatively friendly to large companies, less political and xenophobic in antitrust law enforcement, and great attention to international cartels.

Merger control, the regulation of entities with dominance and market power, and the regulation of horizontal coordination are the three important areas of global antitrust law. In these areas, countries have different perspectives and coping mechanisms. Some traditional regulatory methods have also been continuously developed along with changes in reality. The development of modern technology and the rise of large-scale technology companies have posed major challenges to global antitrust laws.

In the process of the continuous development of global antitrust laws, there are many critical voices: the current market is seriously lacks in competition, and the enforcement of antitrust laws is not sufficient; the antitrust rules themselves are becoming bloated and complicated; due to the lack of effective tools for analyzing cases, the distribution of burden of proof has become the decisive rule of antitrust judgments. In response to these issues, New Brandeis and other critics have put forward various propositions such as “expanding the objectives of antitrust law”, “resurrect antitrust law”, and policy makers of various countries have also made certain degree of adjustments. In fact, the global antitrust law has indeed shown some new development trends, especially regarding the convergence of the global antitrust law in different jurisdictions, supporters and opponents of various countries have put forward powerful propositions.

Chen Ruoying: To a certain extent, countries use antitrust law as a tool to protect their own interests, but most countries do not have a strong judicial organ to force the antitrust system to slow down interventions in enterprises and markets. Will this lead to global antitrust law enforcement agencies adopt more radical antitrust measures, thus triggering a certain kind of “race to the bottom” in policy formulation and enforcement? In addition, what is the goal of the antitrust system? As a regulatory mechanism, can it play an active role in non-traditional areas such as labor market monopoly?