From October 7th to November 4th, 2020, Jeremy Horder, Global Faculty of PKULS and Professor of Criminal Law at the LSE, UK, held four online lectures on the theme of "Corporate Anti-Bribery Law: Comparative Analysis”. This series of lectures was hosted by Jiang Su, deputy professor of PKULS. Many teachers and students were attracted to these lectures. 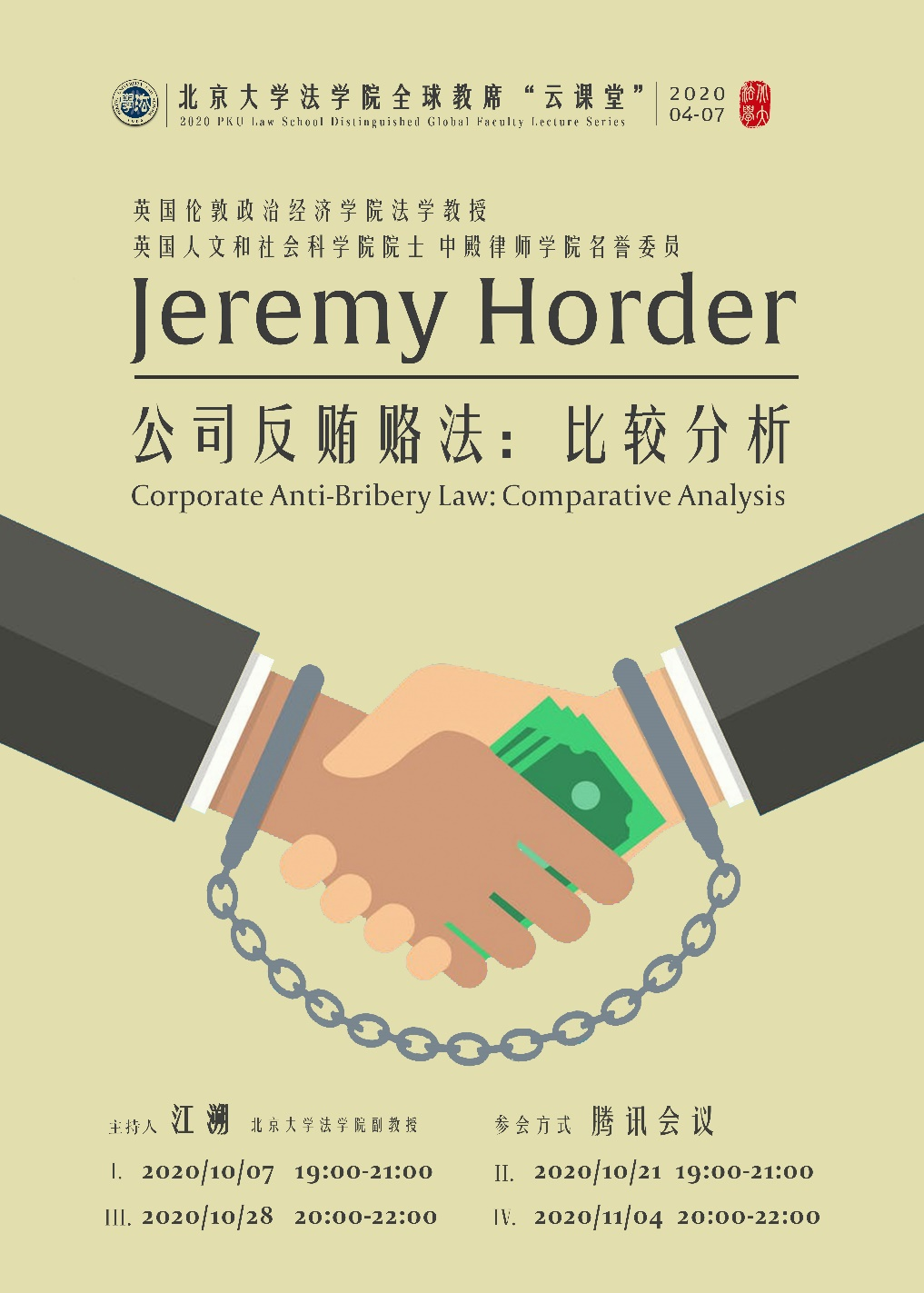 Jeremy Horder is a professor of criminal law at the LSE, a member of the British Academy of Humanities and Social Sciences, and an honorary member of the Middle Temple School of Lawyers. After graduating from the University of Hull and Oxford, he served as the head of the Faculty of Law at the University of Oxford from 1998 to 2000, and was a member of the Law Reform Commission of England and Wales from 2005 to 2010, mainly responsible for criminal law reform. He was the Edmund-Davies Chair Professor of Criminal Law at King's College London from 2010 to 2013. He is also a member of the executive committee of the voluntary organization "Innocent but Justice", which is dedicated to helping families who are fragmented by murders but whose main suspects are acquitted. In 2018, Jeremy Horder's latest monograph "Public Office Malfeasance on Punishment" was published by Oxford University Press.

This article presents the communication and dialogue between scholars in the form of transcripts. 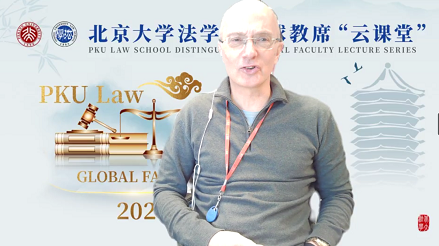 Jeremy Horder: There are legislative disagreements on corporate criminal liability in countries around the world. Some countries deny this concept and advocate that companies should be held accountable for more relaxed administrative responsibilities. Legislation with affirmative views can be divided into three categories: one is a more stringent position, represented by the United Kingdom’s theory of identity, which believes that only the top management of a company can commit a crime and commit a relevant act. However, this standard will allow large companies to use complex organizational structures to avoid responsibilities by decentralizing decision-making power and other measures. In addition, English law provides for the "failure to prevent crime" exception liability model in the areas of bribery and facilitation of tax evasion. The second is a more relaxed position, represented by the alternative liability theory of the United States, which believes that the investigation of corporate criminal responsibility requires an agent to meet three conditions: (1) possess the elements of criminal fault; (2) within the scope of power; (3) for the interests of the company. The theory draws on the principles of civil law, and it does not consider the level of employees, and does not recognize the company's liability immunity, so it may have a negative incentive effect to encourage the company to cover up criminal behavior. The third is a compromise position. With China as the representative, it is emphasized that criminal acts should be made by the collective decision-making of the corporate or by individuals with authority, and must reflect the will of the corporate.

Jeremy Horder: There are many differences between natural persons and companies. The latter can recognize and act collectively. On the basis of distinguishing from members of natural persons, the recognition of the concept of "corporate personality" may have a certain impact on the criminal law.

Jeremy Horder: The British’s anti-bribery law was reformed in 2010. The purpose of the crime of bribery is to implement “improper behavior”, that is, to violate the expectations of good will, fairness, and trustworthiness. British people's expectations of behavior are taken as standards, and legal consequences include imprisonment for less than ten years, unlimited fines, and deprivation of qualifications to participate in public sector bidding. In addition to British citizens, the law also applies to natural persons or companies reside in the UK, registered in the UK, or conduct business in the UK. Article 7 of the law stipulates failure to prevent bribery as an independent crime, that is, the company commits a crime if people connected with the company (not limited to employees or agents) in order to obtain and maintain business, or for the company to obtain and maintain advantages in business activities.  At the same time, the company can raise a defense on the grounds that it has established "adequate procedures" to prevent the occurrence of crimes. Whether the procedures are adequate depends on the nature of the business and the size of the company. The official guidelines further propose six principles: due process, top-level commitment, risk assessment, due diligence, communication and monitoring.

Jiang Su: According to the British Anti-Bribery Act, the targets of failure to prevent bribery crimes include the bribery crimes act by subsidiaries or other companies, but if the company has established adequate procedures or even hired compliance officials, can it constitute a defense?

Jeremy Horder: A company should be rewarded for implementing a procedure to prevent bribery, but the premise is that the procedure is true, effective, and appropriate. For this, it should consider factors such as industry regulations and trading partners. For example, companies that conduct economic transactions with areas where bribery risks are high should assume higher preventive obligations.

Anti-bribery from an international perspective

Jeremy Horder: The United States’ Foreign Corrupt Practices Act of 1977 is the first important attempt to combat international bribery. The law adopts a two-pronged approach and stipulates an internal accounting disclosure system. At the same time, the law creatively entrusts overseas companies with the obligation to comply with domestic regulations, focusing on the behavior of bribery parties, and is widely applicable to the promotion of bribery or illegal payments in the United States. But in international bribery cases, the United States usually seeks cooperation with overseas prosecutors. In addition, the law stipulates that bribery must have corrupt intent, so giving property due to extortion is not considered as a bribe. On the basis of the alternative liability model, the parent company shall be responsible for the bribery of its authorized, participating, or under its control subsidiaries. In 1988, Congress made the following amendments to the law: First, three defenses were added, including the payment is legal overseas, the payment is true and reasonable, and the payment is for a daily government action (that is, facilitating payment); Secondly, with the introduction of a safe haven clause, you can seek guidance from the Ministry of Justice on the business conduct in dispute, but this clause is less applicable and limited to bribery crimes.

According to the Chinese Criminal Law, directors and managers may be liable for intentional or negligent failure to take measures to prevent bribery. At the same time, the scope of criminal responsibility of the corporate is also wide, especially the meaning of "persons directly responsible" in Article 31 is not clear. The "Criminal Law Amendment (8)" added bribery penalties to foreign public officials and public officials of international organizations, which can be regarded as a copy of the relevant British and American regulations; the "Criminal Law Amendment (9)" prohibits bribery of national employees who leave their posts. The penalty loopholes in the US model have been eliminated, but there is still a lack of clear jurisdictional provisions on overseas bribery. Moreover, the Chinese Criminal Law also partially solves the problem of so-called facilitation fees through regulations on criminal intent and amount of crime. The promulgation of the "Anti-Unfair Competition Law" also has a certain impact on the determination of bribery crimes.

Jiang Su: In recent years, some Chinese companies have been sanctioned by the Foreign Corrupt Practices Law. Is the trans-regional jurisdiction of this law too broad or too narrow?

Jeremy Horder: It is difficult to make such an assessment. International bribery is a matter that needs to be taken seriously by various jurisdictions, but the jurisdictional basis of US law may be too arbitrary, even including settlement in US dollars or the use of US servers for mail exchanges. The British law requires companies to register in the UK, or at least to conduct commercial activities in the UK. In the context of globalization, opposing international bribery should punish local companies on the one hand. On the other hand, large countries can also help countries with weak rule of law to investigate their local bribery.

The system of deferred prosecution agreement from a comparative perspective

Jiang Su: There is no provision for deferred prosecution agreements in Chinese law. When introducing the system, we must pay attention to the differences in the background of different countries. Moreover, China does not have an independent department responsible for corporate crimes, and all crimes are uniformly stipulated in the Criminal Code.

Jeremy Horder: In addition to efficiency considerations, the deferred prosecution agreement system can also be helpful for China in handling international bribery cases and dealing with conflicts across jurisdictions.