"When the pen digs into the ground, and the scales walk down the court,

with a spoonful of rice wine and a local accent, the train roared five thousand miles through endless mountains.

The view of your back is on the road, melting into the morning sun."

On the way home after the ideological and political practice courses, Lou Jialu, a 2019 undergraduate of PKULS, recalled the hardships and transformation of the Selected Newly Appointed Cadres in the mountains, and wrote this "Tristich " affectionately. Not only in Guangxi, this summer, young law students from Peking University went to villages, towns, factories, workshops, governments, courts, and fields, reviewed the original hearts and beliefs of the Communist Party of China, touched the pulse and vitality of Rural Revitalization, witnessed the realization of the vision of Poverty Alleviation and Comprehensive Well-off… these all are imprinted in the hearts of the students.

In August, according to the unified requirements of the undergraduate ideological and political practice course of Peking University in 2020, leading by Pan Jianfeng, Dean of PKULS, and Guo Li, Party Secretary of PKULS, 14 professional teachers and ideological and political instructors acted as teachers, 12 senior graduate party members served as course assistants, and led 179 undergraduates to Yan'an in Shaanxi, Zhangbei in Hebei, Fuzhou in Fujian, and Guangxi Zhuang Autonomous Region. They carried out ideological and political practice courses online and offline under the themes of "Staying True to one's Original Aspiration", "Poverty Alleviation", "Rural Revitalization", and "Judicial Reform and Grassroots Governance", to shape students' cognition of national and social conditions, guide students to cultivate patriotism, and set themselves up as striders.

The revolutionary culture and advanced socialist culture forged by the Communist Party of China in the process of leading the people in revolution, construction and reform are the profound force for carrying out ideological and political practice courses.

At the Yan'an revolutionary memorial hall and the former site of the high court of the Shaanxi-Gansu-Ningxia border region, the students enthusiastically reviewed the glorious journey of the Chinese Communists in their unremitting efforts to achieve great achievements. They carefully understood the arduous process that the revolutionary ancestors laid the foundation for the rule of law construction of new China, found the mystery of history and people's choice of Marxism and socialism, and strengthened the mission and responsibility of PKU youth in the new era. 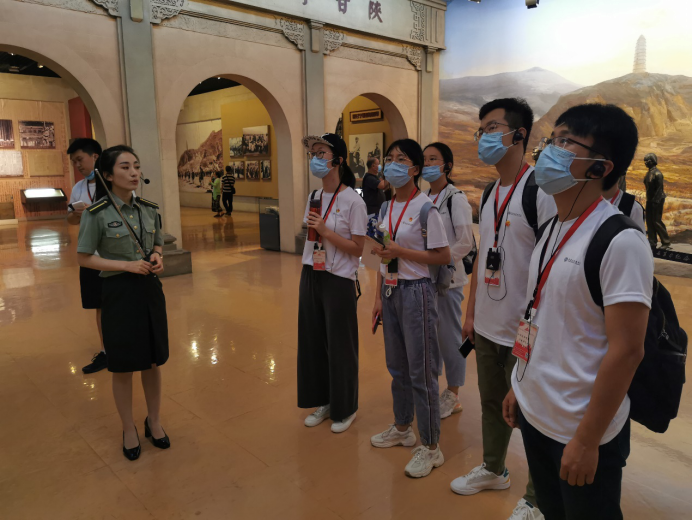 In liangjiahe village, Lu Jiangnan, Vice Party Secretary of PKULS, led the students to go back to the road of educated youth, deeply studied their struggle stories, and realized their enduring spirit. The students learned that General Secretary Xi Jinping led villagers to fight dams and silt fields, repair biogas digesters, dig deep wells, grow vegetables and run industries during his time in Liangjiahe, which changed the poor village and made the villagers live a better life. Deeply touched by the General Secretary's passion and spirit, the students have strengthened their confidence and determination to make achievements in places where the Party and the people need them after graduation. 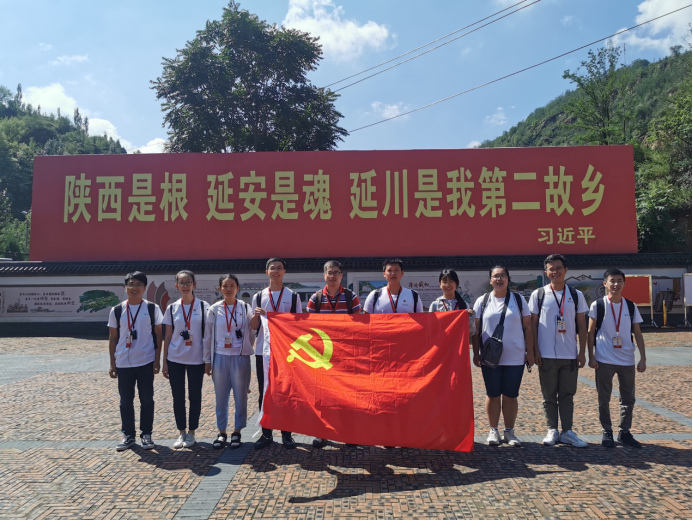 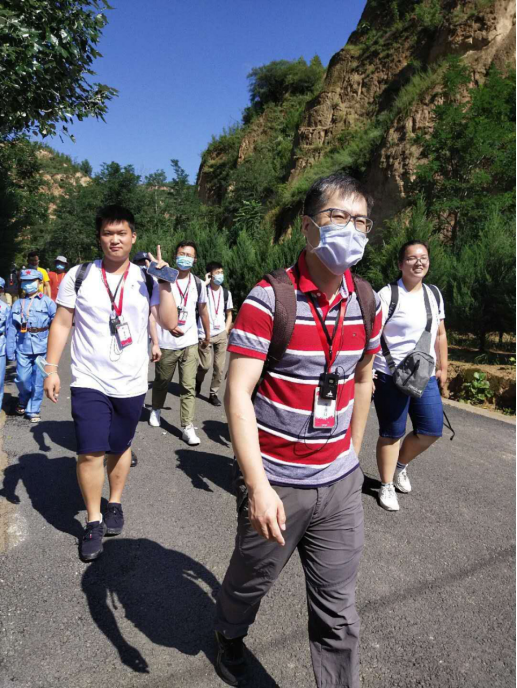 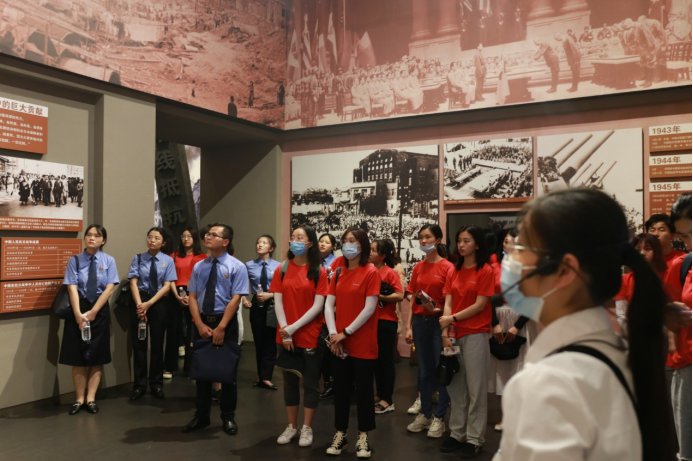 (In the Kunlun Pass Battle Museum) (Laying flowers at the martyrs' monument)

In order to guide students better to deeply understand the general objectives, general principles and general requirements of the Rural Revitalization Strategy, feel the development and changes of rural construction in recent years, and realize the complexity and difficulty of Poverty Alleviation, the teachers and students went into the towns and villages to carry out practical research. 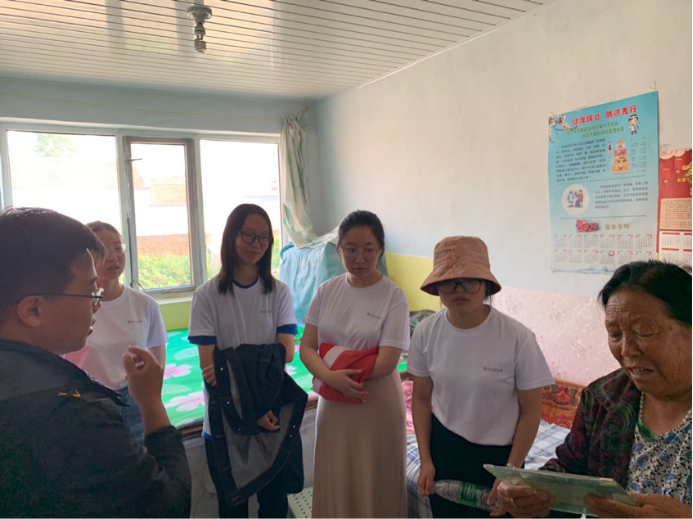 (Talking with the villagers)

In Desheng Village of Zhangbei, the students visited the village exhibition hall, cultural hostel, agricultural science and technology sightseeing park, and investigated the construction of new residential buildings. The students were keenly aware of the CPC's outstanding leadership and the CPC members' dedication to serving the people. In the high-tech vegetable greenhouses, students and local cadres conducted in-depth discussions on how to balance the role of the government and the market in the Poverty Alleviation work. 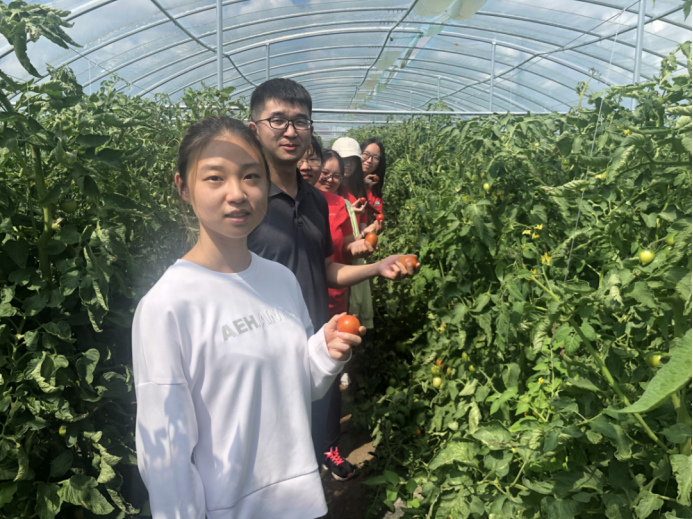 Visiting Qingpi village, NaPi village and Bazhaiyuan village in Qinzhou, Guangxi, the members of the practice group witnessed the remarkable achievements in the construction of "Beautiful Village". The fertile landscape, the village’s new look,the warm local people, and the scene of harmony between the cadres and the people, the unity of the nation for development, all made the students feel the huge investment of the local government and leading cadres in the Rural Revitalization work, so as to have a deeper understanding of General Secretary Xi's scientific conclusion that "green waters and green mountains are golden mountains and silver mountains". 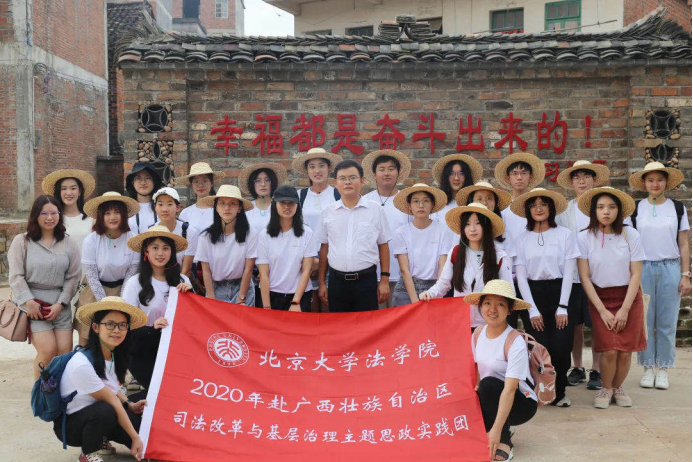 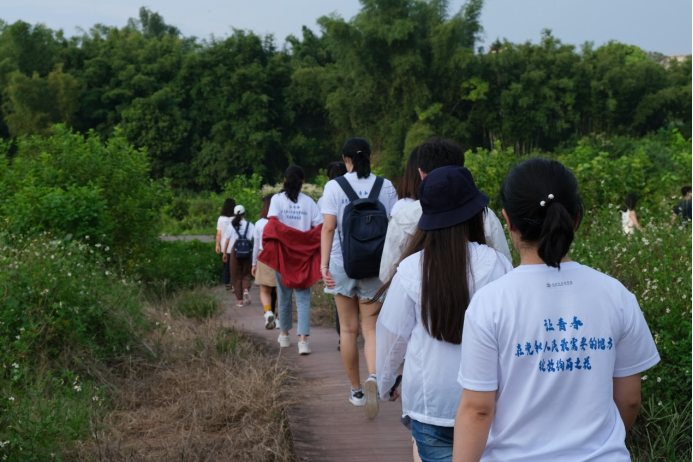 In Fuzhou financial holding group, the staff introduced the specific measures taken by the group to implement the Rural Revitalization Strategy, such as establishing a rural industry development company, operating special funds for rural development, building an agricultural e-commerce platform, and providing guarantee services for small and medium-sized enterprises, individual businesses and "three rural" entities. The financial combination of state-owned enterprises to help agricultural development left a deep impression on the students, also let them realize that the development of rural areas does not rely on individual struggle, but on the joint efforts of the whole society. The practice group also visited the Nanyu People's Court of Minhou County, Fuzhou, to deeply understand the practice of the rule of law at the grassroots level in the process of Rural Revitalization. During the visit, the students had a detailed exchange with the president on issues such as mediation and jurisdiction of the people's court, professional competence of grassroots judges, and professionalism of judges. They had a deeper understanding of the functions of the people's court in resolving conflicts and disputes and innovating social governance as the forefront of Justice for the people. 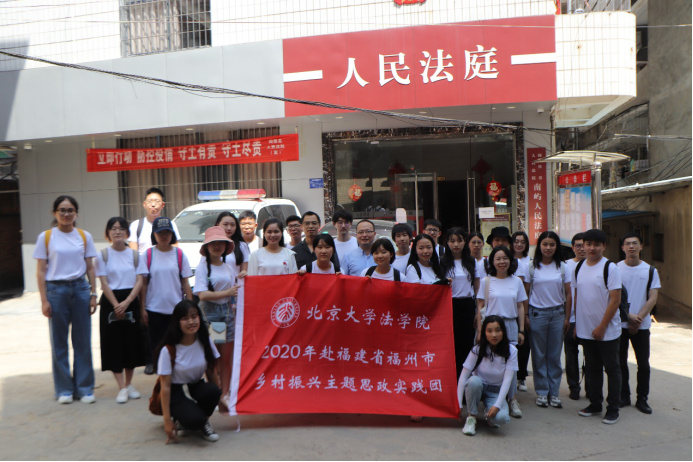 In Qinzhou People's Procuratorate, the group watched the live report of Qinzhou municipal procuratorate connecting with Pubei County and Lingshan County procuratorate to direct and handle the Public Interest Litigation related to the protection of martyrs' monument; they visited the Rapid Detection Experimental Center of Public Interest Litigation, listened to the brief introduction of detection instruments by relevant personnel, and fully felt the convenience and change brought by science and technology to justice. 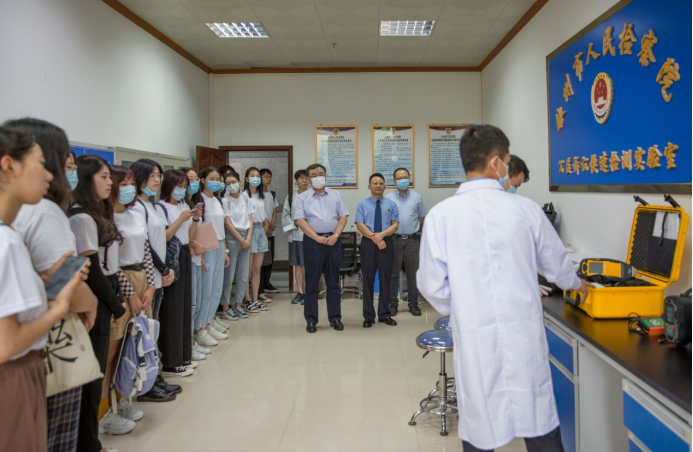 At the forum of the Discipline Inspection Commission of the autonomous region, the students actively asked for questions about the coordination of the functions between the supervisory committee and the political and legal system, the supervision and restriction mechanism of the supervisory authority itself, and the application of Internet plus technology, and received replies from the responsible comrades. 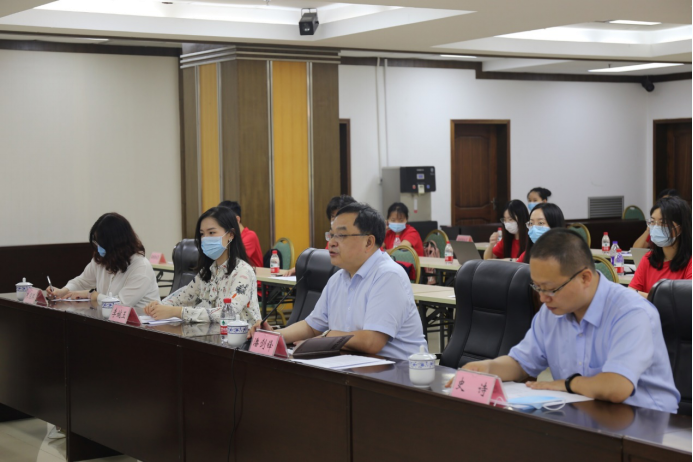 (At the Forum of the Discipline Inspection Commission)

Moreover, the practice group also visited the People's Procuratorate of Guangxi Zhuang Autonomous Region. At the meeting, Luo Shaohua, member of the Party group and Deputy Chief Procurator of the People's Procuratorate of the autonomous region, and Pan Jianfeng, Dean of PKULS, jointly signed a Comprehensive Co Construction Agreement and a Cooperation Agreement on building an education base for ideological and political practice courses. Pan said that PKULS will make joint efforts with the Procuratorate of the Autonomous Region to continue to do a good job in the construction and improvement of the ideological and political practice education base, conduct comprehensive cooperation and complement each other's advantages, better realize the organic combination of legal theory and judicial practice, and provide talents and intellectual support for the construction of the rule of law in the new era. 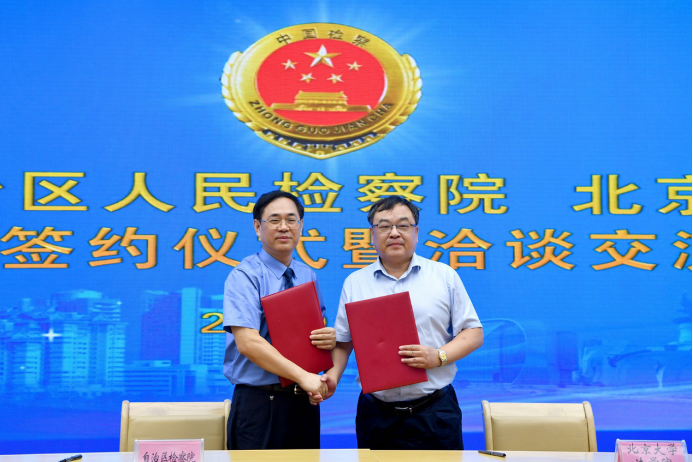 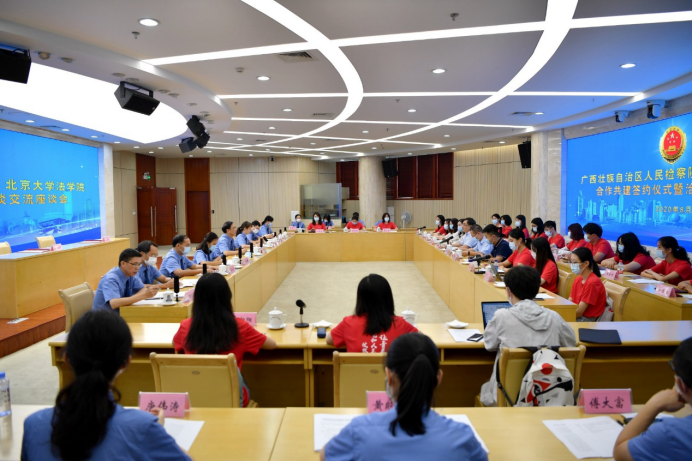 (At the Forum with the People's Procuratorate’s members)

Pan Jianfeng expressed his cordial sympathy to the alumni of the Selected Newly Appointed Cadres who worked at the grass-roots level. He urged the students of the practice group to cherish the rare exchange opportunities and take the excellent senior brothers and sisters as examples to lay a solid foundation for their future career planning.

Guo Li said that the law school will continue to smooth the communication channels between students and alumni, encourage students to actively think about how to shoulder the historical mission entrusted by the times, integrate the pursuit of personal ideals into the national cause, go to the grass-roots level, and contribute youth wisdom and strength to grass-roots governance, rural revitalization and legal development. 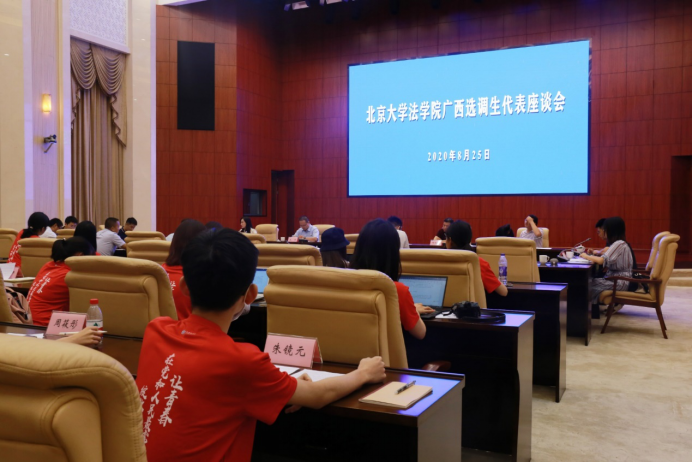 (At the Forum with the Guangxi Selected Graduates) 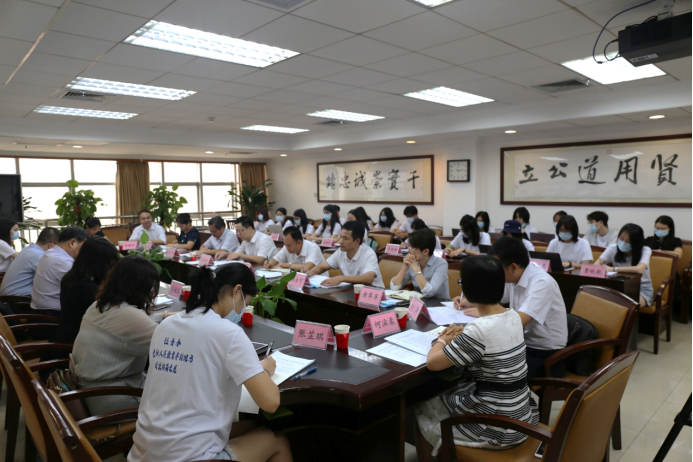 (At the Forum in Qingzhou Municipal People's Government)

(At the Forum with the Fuzhou Selected Graduates)

In order to fully summarize and communicate, the practice groups hold daily meetings and Theme Group days to carry out ideological and political practice education.

In the forum, students talked about their practical feelings and analyzed their learning experiences; during the Theme Group days, the participating teachers and students reviewed the oath of joining the league, and recalled their original intention and strengthened their responsibility. 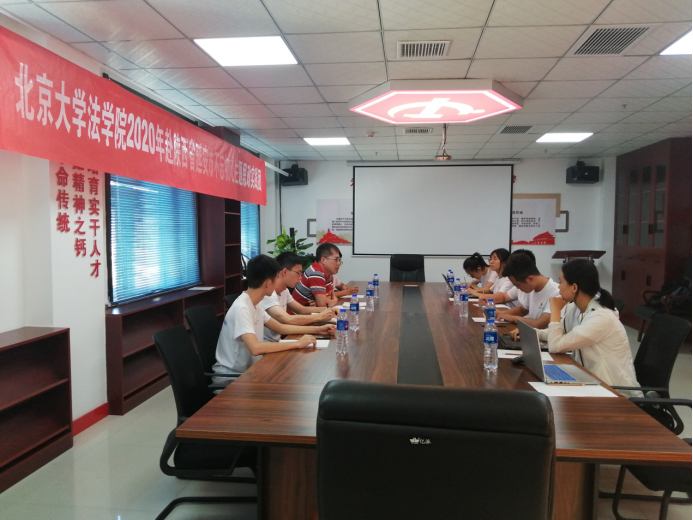 Lu Jiangnan, Vice Party Secretary of PKULS, expressed his honor of coming to Yan'an to experience the revolutionary spirit with students. He encouraged students to constantly improve their understanding of the national conditions, the party's situation and the social situation, connect their own academic background and future development plan with the cause of the party and the nation, focus on what to do, how to do, and for whom, so as to truly cultivate their excellent skills and cultivate their moral character in practice, so as to contribute to the vigorous development of the motherland and contribute to the youth strength of the new era.

Shi shi, the Secretary of the Youth League Committee of PKULS, highly affirmed the students' performance in practice and encouraged them to "have ideals in their hearts, soil at their feet, skills in their hands, and morality on their shoulders". They should actively think about how to shoulder the historical mission entrusted by the times, constantly deepen their understanding of the spirit of the University's legal personnel and cultivate their national feelings. 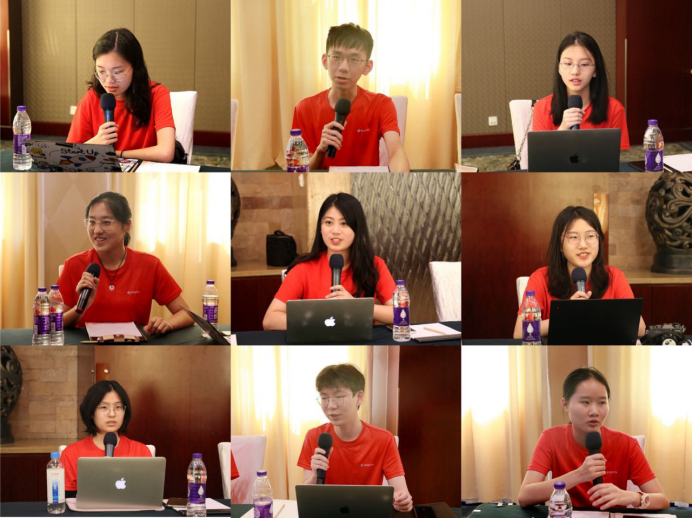 (Talking about their practical experience)

Although the three-day practice time was short, the students of the practice group measured the land with their feet, watered their ideals with sincerity, and turned the abstract principles in textbooks into insightful insights in their minds with their own practice, expressing their full harvest. On the one hand, the fruitful results of comprehensive deepening reform, the continuous improvement of grass-roots governance level and the increasing happiness of people's lives have encouraged students to further consolidate the foundation of their ideals and beliefs. On the other hand, they realized that there are still problems to be solved in the process of reform and development, and they can encourage students to return to the classroom and study knowledge in a solid way, under the guidance of Xi Jinping's New Socialist Ideology with China's characteristics, closely link the realization of personal values with the future and destiny of the party and the country, lay a solid foundation for future socialist construction. It is believed that ideological and political practice will plant the seeds of mission in the hearts of students. When the big trees grow up, they will take root in the motherland and write a colorful chapter of youth.