You are here： Home» News» Global» The youth record of "epidemic" in the youth war of Law School: Lu Sentong, a doctoral student of 2018, actively raised materials to fight against the epidemic

The youth record of "epidemic" in the youth war of Law School: Lu Sentong, a doctoral student of 2018, actively raised materials to fight against the epidemic

During the critical period of epidemic prevention and control, the "post-90s" youth of Peking University Law School always adhere to all kinds of volunteer services for epidemic prevention: some students have been actively assisting their communities to complete the statistical work of floating personnel for more than two months; some students have organized many epidemic prevention knowledge publicity and popular science activities; some students have been responsible for the community's material procurement and distribution for many days in a row mission. They give full play to the vanguard and exemplary role of the Communist Party members and the Communist Youth League members, respond to the general secretary's instructions in the reply letter with their own practical actions, showing a bit of enthusiasm, a bit of light, and a vigorous youth force. 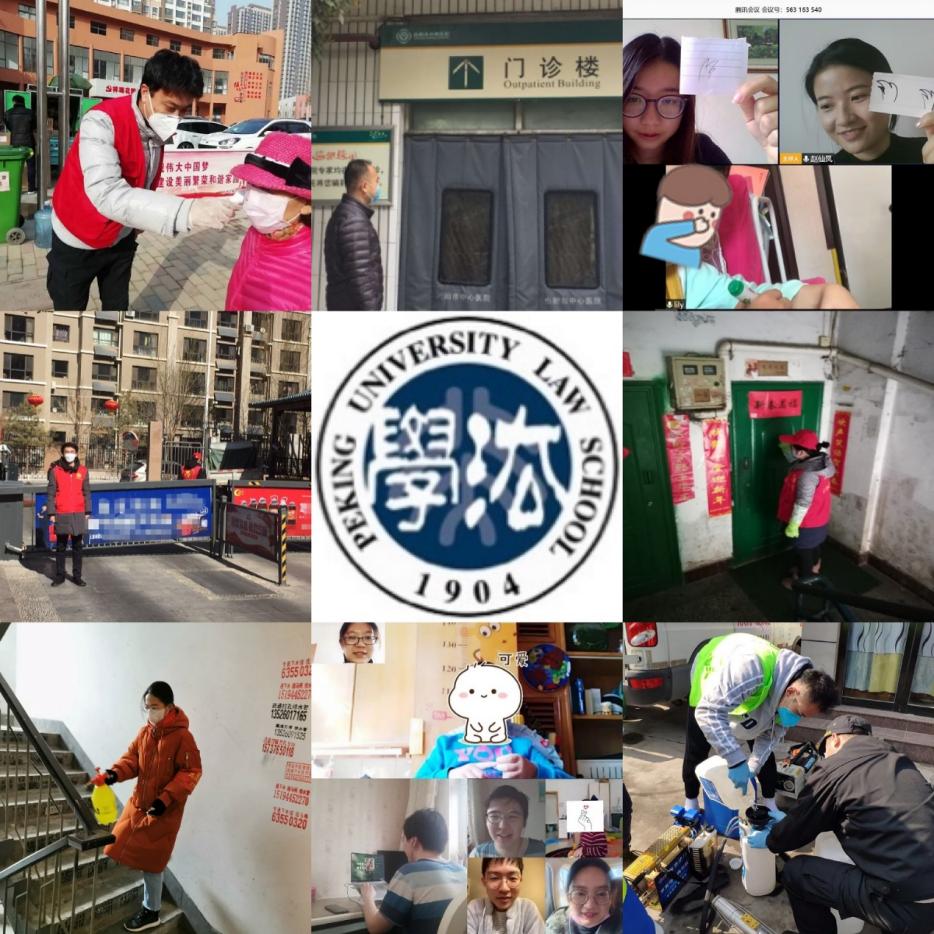 Lu Sentong: I have a duty to serve the country

"Sentong, Nanyang medical supplies are in short supply. It's an emergency. Can you help me find a way? " In early February, a phone call from Nanyang Central Hospital in Henan Province made Lu Sentong's heart wrenched.

Nanyang is his hometown. Although others are in other places, he is always concerned about the situation of Nanyang's anti epidemic. As the main road to the north of Hubei Province, Nanyang needs to absorb and resettle more than 60000 Nanyang people who have returned home from Hubei Province. Under various pressure, a large number of local medical supplies were in short supply.

Under the situation of increasingly serious epidemic situation and shortage of domestic materials in his hometown, Lu Sentong, who had studied abroad, decided to contact the overseas Chinese Affairs Office of the United Front Department of Henan Province, organize contacts with overseas Chinese, and collect donations to solve the urgent problem in his hometown.

Time difference, a voice call will connect day and night, breaking the space-time distance. At the early stage of the epidemic, an Italian overseas Chinese contacted by Lu Sentong bought a large number of masks and protective clothing to help fight the epidemic in China, but only after they arrived did they find that the materials did not meet the medical standards. The two communicate and contact each other over and over again. One compares the models carefully abroad and the other is busy docking at home. What impresses Lu Sentong is that when the anti epidemic materials that meet the medical standards finally arrived at home and were sent to the designated hospital, they were silent for a long time after the voice was connected. Lu Sentong's heart was speechless. He guessed that the overseas Chinese at the other end of the phone might be the same. 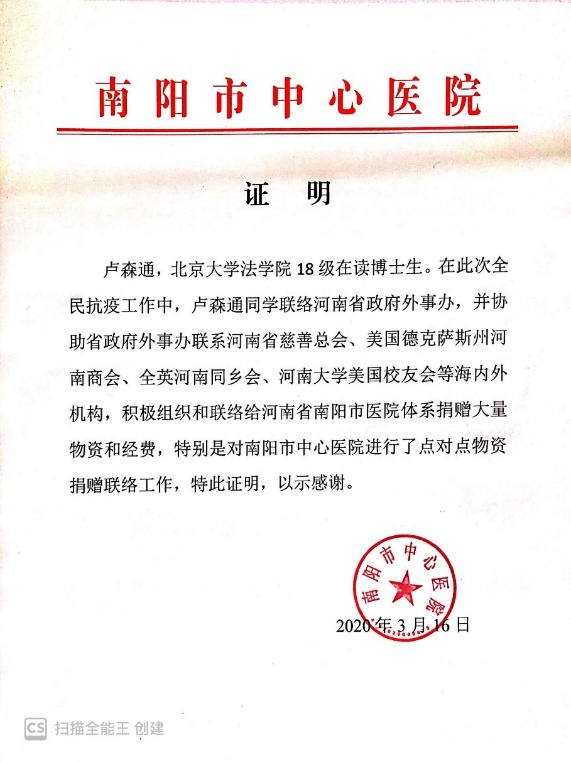 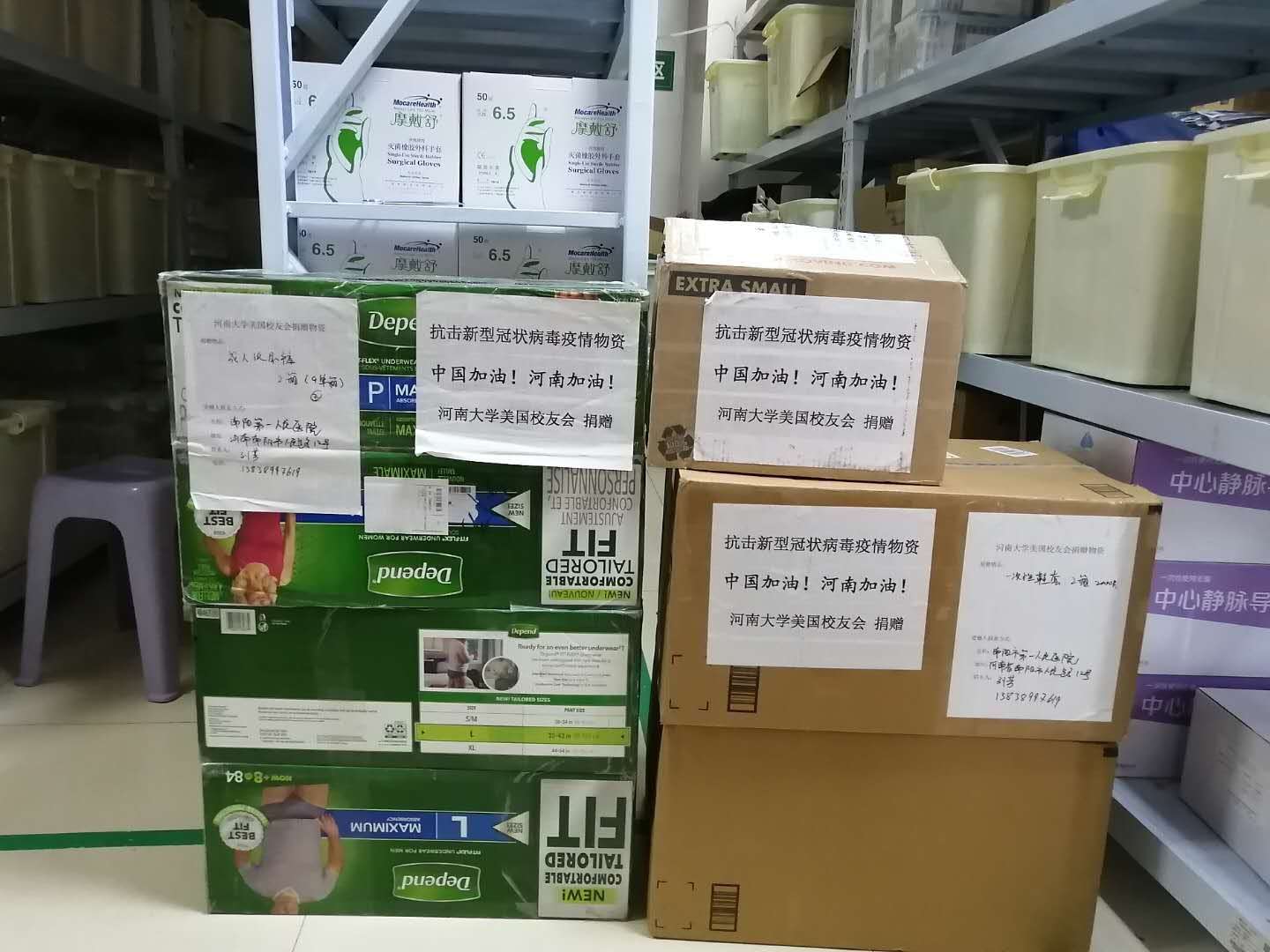 After the relief of domestic medical and epidemic prevention materials reserve, Lu Sentong also donated 1000 medical protective masks to the Law Department of Moscow University by contacting the Constitution and Administrative Law Center of Peking University, helping relevant institutions at home and abroad to achieve better docking and build a solid bridge for common war.

On December 30, 2017, General Secretary Xi Jinping sent a reply to China's students studying in Moscow State University, encouraged overseas students to carry forward the glorious tradition of studying abroad, to cherish their ambition, study hard, and grow into a brilliant and capable person as soon as possible, dedicate their learning skills to the motherland and people, and let youth shine on the road of striving for dreams. As the writer of the letter, Lu Sentong always remembered "let the light of youth shine on the road of striving for dreams", and showed the due responsibilities and actions of young legal persons and returned students in Peking University in the anti epidemic.

"At present, great strategic achievements have been made in the national epidemic prevention and control resistance war. This national anti epidemic campaign makes me feel the strong cohesion and centripetal force of the motherland. We live in a great era. When the Chinese people at home and abroad unite, we will have the courage to face all difficulties and challenges, and all difficulties will eventually be overcome. " Lu Sentong said. In this special period when the whole country is united to overcome the difficulties, the young students of Law School have never been absent. Although they can't go to the front line of anti epidemic like medical workers, youths of law always show their childlike heart with their efforts. They always keep in mind the General Secretary's expectations and instructions for young Party members and League members, adhere to the high spirited enthusiasm and solid action, and contribute to winning the overall war of epidemic prevention and control and the war of resistance.