You are here： Home» News» Global» Level 2019 Master of Law (non-law), the 4th Communist Party and Communist Youth League branch of Law School implements the spirit of reply letter: “No Off-line” and inspires the youth with actions.

Level 2019 Master of Law (non-law), the 4th Communist Party and Communist Youth League branch of Law School implements the spirit of reply letter: “No Off-line” and inspires the youth with actions.

On March 15, General Secretary Xi Jinping's replies to all the post-90s Party members of the Medical Team of Peking University's Medical Team for Hubei Province aroused warm responses in the 4th Party and Youth League branches of the 2019 Master of Law (non-law) in Law School. Students expressed that they should learn from the model young Party members of the Medical Team for Hubei Province, take up responsibilities bravely, make active contributions, internalize and externalize the spirit of General Secretary's replies in their hearts, and contribute to the post-90s youth in the war struggle.

Leading by the CPC and Calling Responsibility

In order to give full play to the fighting fortress role of the Party organizations and the exemplary vanguard role of the Communist Party members, as well as the role of the Communist Youth League as an assistant and a bridge and link between the Party and the reserve forces and the youth, on the evening of March 16, the Fourth Party and League Sub-Branches of the Master of Law (Non-law) Level 2019 Law School jointly held the themed Party and League Day activity, and organized the students to watch the news report video on the reply of the General Secretary online. Based on the introduction to the relevant background of Peking University Medical Team to Support E from the class teacher and Chen Zhihong, the director of the Law Library, the students actively spoke up their stories and reviewed the touching deeds that emerged from Peking University Medical Team to Support E's expedition since January 26. Then, based on the characteristics of law majors, students  exchanged and shared their thoughts and experiences, inspire and encourage each other in their work, study and life.

Party member Xia Tianka said, "If you are young, the country will prosper. If you are strong, the country will prosper." As a member of the Youth Party, we should always bear in mind the advice and encouragement of the General Secretary. Our sense of achievement, our sense of gain, our sense of security will be linked to the development and prosperity of this country as never before. And we are so lucky, can use our own actions, our own strength to witness this new era of China. All the members of Peking University's Anti-Epidemic Medical Team in Hubei fought the battlefield of life with love, ideals and responsibilities, which made me feel special. At present, the epidemic situation, we should not only do a good job of domestic affairs, but also dare to take responsibility, and actively contribute to this anti-epidemic war!

Liu Chuantai, a member of the Communist Youth League, said that in his reply to the General Secretary's letter, it touched me most deeply: "If the young generation has ideals, skills and responsibilities, the country will have a future, and the nation will have hope."The once protected buds have gradually grown into trees, stretching green leaves and sheltering the four sides. Listen to the General Secretary's reply, I am excited, as a post-90 party members in Peking University, I more deeply understand the General Secretary's deep entrustment. Although it is impossible to go to the front line like most medical personnel, we should keep in mind the earnest expectation of the General Secretary, study hard and not be afraid of the wind and rain, and let the youth bloom in the most needed places of the Party and the people.

Monitor Xu Mengyao said that these rushed to the front of the Peking University medical care workers, many of them are post-90s party members. Before the aid, they were only the children of their parents, protected treasures, but when they reached the front line, they became virus busters, the guardians of life incarnate. We have seen from them the ability and responsibility, in their actions to understand the responsibility and strength. President Xi said, "If the younger generation has ideals, abilities and responsibilities, the country will have a future and the nation will have hope." As members of the post-90s Party, we should think carefully about how to take up our responsibilities and how to exert our abilities. If we can't go out in a corner, we should be self-disciplined. We should strengthen our professional skills. Young people should be able to do great things. " 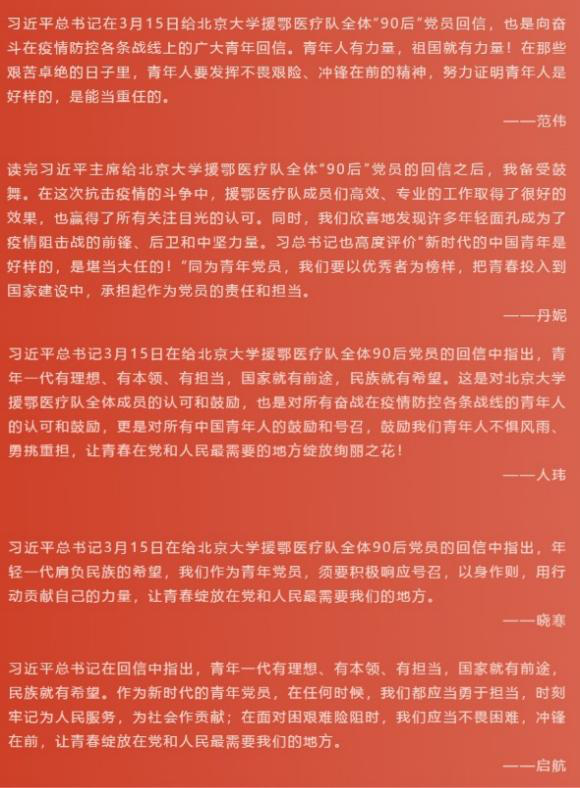 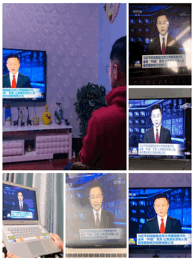 Since the outbreak of the epidemic, the 4th Party and Youth League branches of the Master of Law (non-law) from Law School, Level 2019, have always been "staying at home", actively responded to the call of the General Secretary. On the platform of the official number of the branch "Three Years, Four Classes", a series of activities have been carried out to "unite the youth forces, work hand in hand to fight the epidemic —" Four Seas, with One Heart in the Fight, The 4th Class in the Action ", which have played an extensive leading role at the class and college level.

On March 13, the branch launched a tweet entitled "Four Sea Concentrations-We All Live in Wanliu 2003-2020." It invited Cao Rong, who now lives in the Wanliu Apartment, to share his school's current epidemic prevention policies and measures. Through collecting information from the Internet, the branch looked back on how the students who lived in Wanliu during the period of SARS achieved unity, overcame difficulties, and maintained zero records of infection from beginning to end. The pictures and texts of this tweet enabled the students who were not in school to feel the efforts made by the school to ensure their safety, helped them to better understand the purpose of the "no return" epidemic prevention regulation, and further strengthened the cohesion of the branch. The branch also strengthened the confidence of the students to unite and overcome the epidemic. On the day of Women's Day, the branch launched a tweet entitled Four Concentrating on the Sea - Beautiful, Walking with Women ", collecting and summing up the stories of the female students in the branch who actively take part in the online epidemic prevention work, and bring warmth and enthusiasm to the students. While enhancing the cohesion of the collective, the branch inspired the students to do small things around them and contribute their strength to the collective. 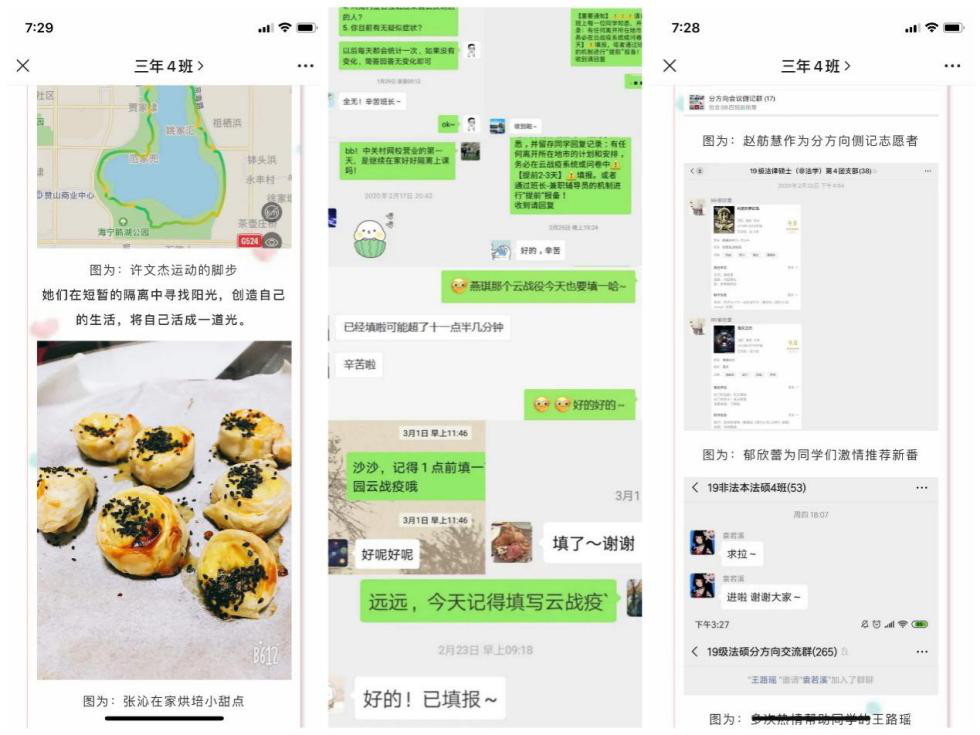 In his reply, General Secretary Xi stressed that if the younger generation has ideals, skills and responsibilities, the country will have a future and the nation will have a hope. In the process of working together to combat the epidemic, the Fourth Party and League Branches of Law School, Level 2019, have never forgotten the General Secretary's instructions to young students to "cherish learning time, develop excellent skills", "grow vigorously in the service of the people, temper their will and quality through hard work, and increase their work skills in practice", and have planned and carried out a series of activities on the theme of "Four Concentrations on the Sea - School Suspension, Four Classes with you" and "Four Concentrations on the Sea - Your Profession - What Can You Do for Fighting the Epidemic" to share their learning materials. Grasping the characteristics of the diverse backgrounds of the undergraduate majors of the students, we have carefully sorted out various kinds of professional learning resources, so that the students in the branch have fully realized the warmth and support of the collective, and have called on the students to study on their own and overcome the difficulties together. While paying attention to and thinking about public affairs, they should stand on their professional skills and firmly act as active actors in serving the people. In the critical period of epidemic prevention and control, General Secretary Xi's reply is a stimulating and lively education to all the young people, inspiring them to remember their mission and grow up in the service to the people. In the next stage, the Law School will continue to fully mobilize students' Party and League branches to participate in the theme Party and League Day activities by inviting outstanding volunteers and other front-line representatives to take part in the fight against the "epidemic", and guide students to implement the General Secretary's earnest entrustment in their daily study and life, so as to fulfill the youth responsibility of PKU.