Yanyuan has just fallen a snow, the snow is not melting, the sun is warm, and the white snow and bright sunshine add a little warmth to the cold and windy December. Hot tea will be prepared, waiting for alumni to go to a cultural appointment. 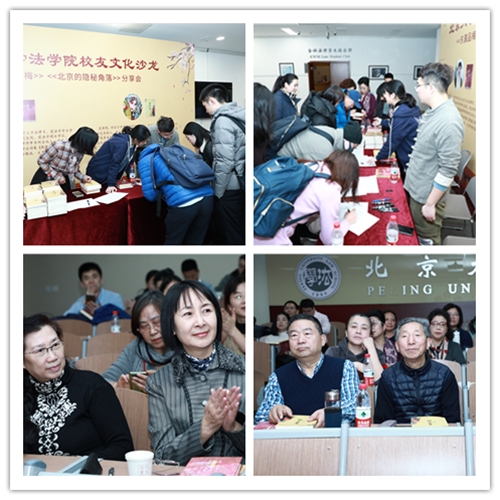 On the afternoon of December 21, the Alumni Culture Sharing Session of the PKULS was successfully held in the classroom B103 of (Leo) Koguan Building. Lu Bo, an alumnus, author of “The Hidden Corner of Beijing”, and a columnist from Tencent, led alumni to share the touching story of the hidden corners of the old Beijing city and the magnificent legend of Peking Opera. Prof. Wu Zhipan, a consultant to the Peking University Alumni Association, Ye Jingyi, deputy secretary of the Party Committee and Secretary of the Disciplinary Committee of Peking University, Park Wendan, Lu Jiangnan, deputy secretary of the Party Committee of the Law School, and more than 80 alumni and classmates from various places attended the event. The event was presided over by Lu Xinxin, deputy director of the Law School Alumni Work Office. 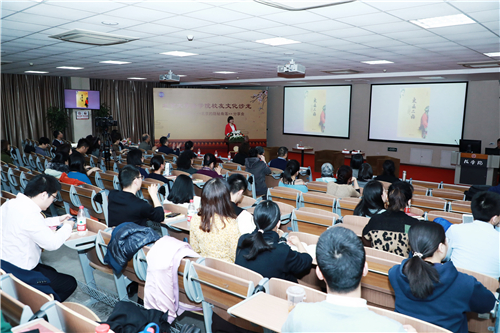 At the beginning of the event, Prof. Wu Zhipan gave a speech first. He expressed his gratitude to the two guests, and said that holding such an event is also showing that the law school not only has rigorous logical thinking, but also has a high literary quality. I hope that everyone can gain something from such activities and enjoy the feast of soul and culture. 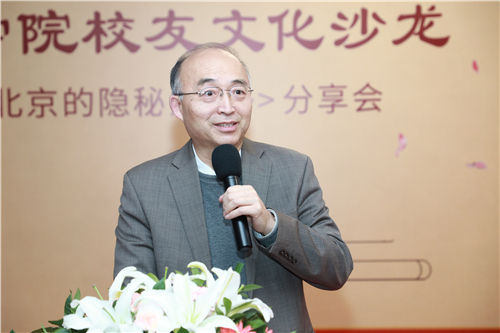 Subsequently, Mr. Lu Jiangnan spoke. He said that the Peking University Legal Person's Cultural Salon embodies the fusion of legal rationality and humanistic care, and it also embodies the orientation of PKULS to cultivate comprehensive literacy and the common interests of alumni. He expressed his heartfelt thanks to the two guests and looked forward to the continued development of the Alumni Cultural Salon on a high-quality platform. 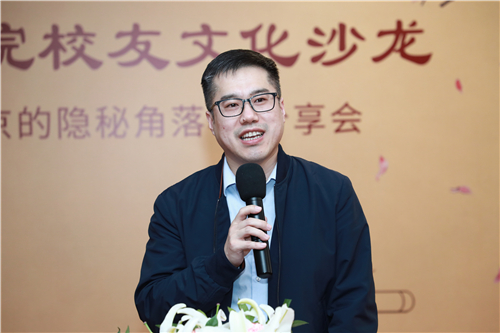 In the following interview session, Teacher Lu Xinxin spoke with guests Yuan Yingming and Lu Bo, and shared stories about their creation and life. Before sharing, we watched a short video introduction by two guests. The short film recorded the stills of Prof. Yuan Yingming in the past and the wonderful moments on and off the stage. The yellowed photos freeze the glory of the past, but the two teachers in reality have confirmed that “if there are poems hidden in the heart, the years will never be defeated.” After more than 20 years of working as a lawyer, teacher Lu Bo has become a columnist for everyone at Tencent. The span is not small. She loves to discover the little stories behind these seeming everyday things. They may be inconspicuous, but interesting And long-lasting flavor. In her book, she wrote the story of the Peking University Weiming Lakeside Flower Temple, a beautiful legend passed on by maggots, and she still can see the indescribable little wishes carved on it, but in fact this cultural relic site has nothing to do with “flower god”. It is the infinite sorrow infiltrated by the middle-aged frustrated princess. 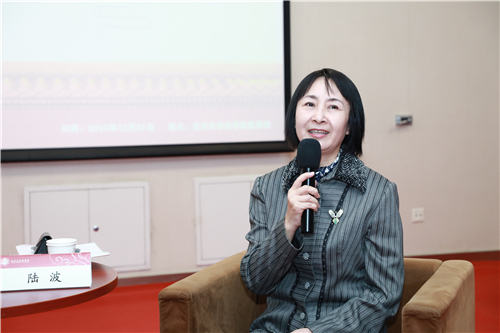 Teacher Lu Bo was born in Beijing and grew up in Beijing. He has deeper feelings about this land than ordinary people, so he is also keen to find stories behind the streets and alleys of Beijing, boasting or marveling, or opening up or crying. She once visited the tomb of Master Mei Lanfang on Wanhua Mountain, and was very surprised by the coincidence of the words "Wanhua" and Master Mei Lanfang's "Huanhua", as if doomed.

Prof. Yuan Yingming has a deeper relationship with teacher Mei Lanfang. As a disciple of Mr. Mei Lanfang's son, Mr. Mei Yan, she always uses Peking Opera as her industry to perform wonderful interpretations, and even promotes teaching in Japan. She mentioned that the Eastbound Japan was due to illness and cultivation, which coincided with reform and opening up, and used this opportunity to learn knowledge and broaden her horizons. Prof. Yuan shared her feelings about teaching Peking Opera in Japan. This period has been hard but fulfilling. Professor Yuan and Japanese students overcome the difficulties together with love and devotion to Peking opera: if they don’t understand the language, then they should start with Pinyin; if there is no foundation, then use Peking opera sings. Finally, with the hard work of Prof. Yuan and the hard work of the students, Peking opera was moved to the stage in Japan. Watching the clip of Japanese students performing the Peking Opera "Journey to the West" brought by Teacher Yuan, the bitterness and sweat afterwards can be imagined. Prof. Yuan is a well-deserved exporter of good culture. She made Peking opera to the world, and let more people appreciate and love this Chinese treasure. And, as the birthplace of Peking opera culture, why do we not love or inherit it? 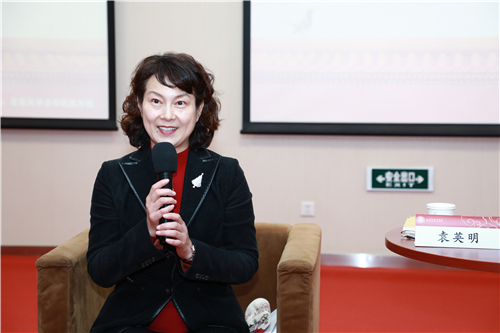 In addition, when Prof. Yuan mentioned Mr. Mei Yan, the teacher, Master said that she was approachable, but never performed in performances. What impressed me most was once at the National Grand Theater and Master played the grand finale "The Concubine of Great Tang". Master asked with a serious expression on his face: “Xiao Yuan, you must give me a military order. It must be successful!" Doctoral dissertation, because of the performance, he had to submit the graduation thesis half a year later after explaining the situation to the supervisor. A generation of famous teachers are passionate and humble about art. You can see it.

It was amazing that Prof. Yuan sang “Pear Flower Songs” on the spot for everyone. It was soft and touching, and it was unforgettable. If you were not in a modern classroom, you would be almost flirtatious, as if you saw Yang Guifei dreaming. , Long hate a long aftertaste.

In the end, Prof. Yuan performed a fragment of “The Heavenly Girl Scattered Flowers”, which really made the on-site opera fans enjoy a grand feast of opera. “Fairy Girl Scattered Flowers” is also the first performance by Mr. Mei Lanfang in Japan, which is very memorable. The silk ribbon surrounds the whole body, as if it is the heavenly girl in front of the eyes. The silk dance is sometimes melodious and elegant, sometimes dazzling. Sometimes it is like a shuttle running, while the dance is soft and powerful, the singing section flows out. 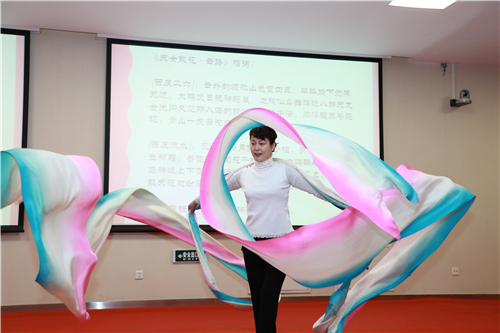 In the interactive session after the talk, Mr. Park Wendan, deputy secretary of the party committee, said: “Beauty is indispensable to others, otherwise it is a machine.” From the perspective of fans, she thanked Teacher Lu for excavating the hidden corners of Peking University and Beijing . She said that since she first came to Peking University in 1987, she has been deeply attracted to it. She always loves to ride around on bicycles, military planes, tiger holes, and every attraction is fascinating. Teacher Lu is a very good storyteller. It is lively and interesting, which makes people add a bit of fun and status to ordinary life. At the same time, she enthusiastically praised Mr. Yuan's performance and greatly admired her efforts to promote Beijing opera in Japan. 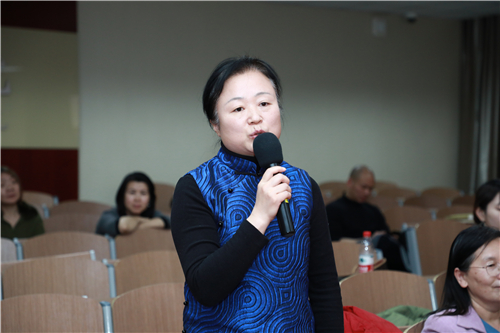 At the end of the event, the readers asked the two guests to sign and further exchange. The cultural salon ended in a harmonious atmosphere. Only the story under the roots of the Beijing city wall and the gentle and graceful posture of the heavenly girl's scattered flowers were lingering for a long time Between hearts.